With North Macedonia’s Inclusion, NATO Gets a Boost That Sends a Message 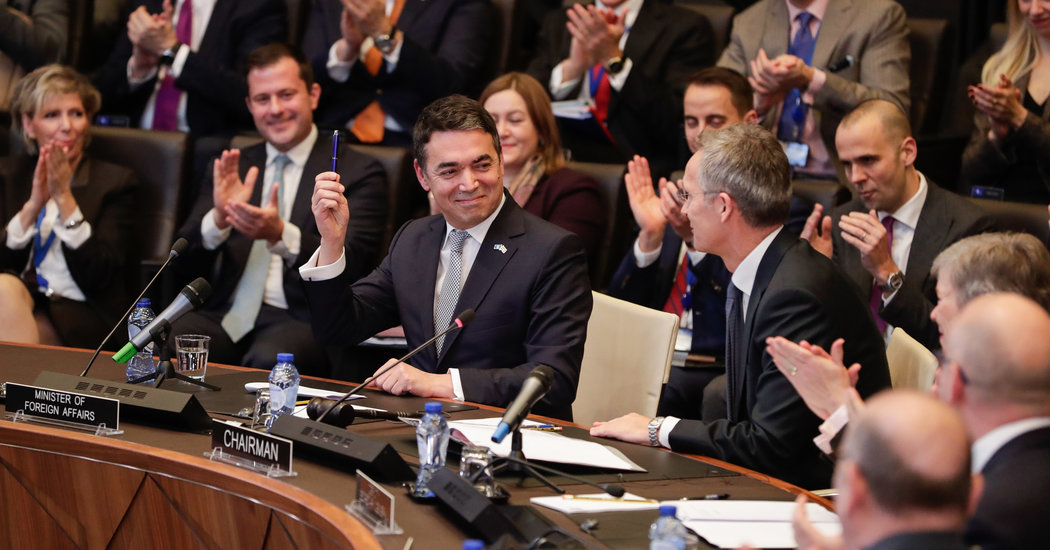 BRUSSELS — The small European country now known as the Republic of North Macedonia may not seem like a significant addition to NATO. But it plugs another gap in what was once the former Soviet Union’s backyard, and comes at a time when East-West tensions are rising.

North Macedonia’s inclusion also means NATO will soon have 30 members, all committed to their collective defense. That is double what NATO’s membership was in 1991, when many experts thought the alliance would disband with the collapse of the Soviet Union and the Warsaw Pact.

On Wednesday, in a ceremony at NATO’s Brussels headquarters, member countries formally signed a letter of accession for North Macedonia, which should become a full member by year’s end.

Political analysts said the addition was a setback for President Vladimir V. Putin of Russia, who sees NATO as an expansionist military force on his country’s doorstep. Mr. Putin has for many years argued that NATO is no longer needed because, he says, Russia poses no threat.

But with Russia openly working to restore its influence in the former Soviet sphere, most vividly in 2014 with the annexation of Crimea and the ongoing war in eastern Ukraine, NATO is an attractive club for small nations like North Macedonia.

“One of Putin’s main hopes has been that NATO would go away or become fragmented,” said Stephen J. Flanagan, senior political scientist at the RAND Corporation in Washington. North Macedonia’s accession, he said, “kind of undermines the Russian narrative.”

More worrisome to some NATO supporters may be President Trump, who has complained vocally that other member countries do not spend enough on defense. He has referred to the alliance as “obsolete” and even threatened to withdraw.

Mr. Trump also evidently worries that small NATO nations in difficult neighborhoods could drag the United States into war under the alliance’s collective security provision known as Article V: an attack against one is an attack against all.

In July, Mr. Trump suggested that NATO’s 29th member, Montenegro, a country of 600,000 people that he described as “very aggressive,” could start World War III.

Mr. Trump’s views raised questions about whether he was committed to coming to the aid of another NATO member state if it were attacked.

Torrey Taussig, a fellow at the Brookings Institution who is based in Berlin, said that even though the Trump administration put a fair amount of diplomatic support behind the Macedonian pathway to NATO, doubts about Mr. Trump’s commitment to Article V have not gone away.

Kay Bailey Hutchison, the American ambassador to NATO, has said the United States “strongly supports” membership of North Macedonia and its 2.1 million people.

In addition, Congress and the Pentagon remain committed to an alliance that supporters have long credited for helping keep the peace in Europe and deterring Moscow for the past seven decades.

Only last month, the House of Representatives resoundingly passed a bipartisan measure, by a vote of 357 to 22, to prohibit the Trump administration from using federal funds to pull the United States out of NATO, rebuking the president for his frequent attacks against the alliance and for suggesting he might seek to withdraw.

Russia’s efforts to sow discord in the alliance have been evident in the Balkans, where it has been promoting its influence in the former Yugoslavia, which both of the newest NATO members were a part of. Russia was accused of trying to overthrow the government of Montenegro in October 2016, for example, in a last-ditch effort to stop the country from joining NATO.

In August, Greece angrily accused Russia of meddling before an important vote in the Greek Parliament on a name change for Macedonia that would clear the way for its accession to NATO. Greece, which has historically enjoyed cordial relations with Russia because of their Eastern Orthodox constituencies, expelled four Russian diplomats.

Despite those setbacks to Russia, it continues to exert significant influence in Serbia, where Mr. Putin just made a state visit and where Russia has major interests in infrastructure. The persistent dispute between Serbia and its former province of Kosovo, which Serbia and Russia refuse to recognize as an independent state, has kept Kosovo from applying to join NATO.

Nikola Dimitrov, North Macedonia’s foreign minister, said NATO membership would place the country in “a zone of stability in a region that still has pockets of uncertainty.”

Membership was so valuable to the country that it agreed after years of negotiations with Greece, a NATO member, to change its name from the Republic of Macedonia. The Greeks argued that they already had a northern territory called Macedonia, that historically, Alexander the Great was Greek — Alexander of Macedon — and that the ancient kingdom of Macedonia sits within modern Greece.

Until the name change, Greece had vetoed Macedonian membership in NATO, much to the annoyance of the rest of the alliance.

The name issue had for years kept the Macedonians from trying to join the European Union as well, since, like NATO it also operates by consensus. Only now that Greece has lifted its veto can actual accession talks to the European Union begin.

“This really is a big moment,” said Stevo Pendarovski, a Macedonian official who is the coordinator of the country’s NATO accession efforts.

While NATO is proud of its expansion, NATO members remain wary of Mr. Trump’s anger and his habit of interrupting the proceedings for disquisitions on the failings of his allies, which was on display at the last NATO summit meeting, in July.

This April is the 70th anniversary of the alliance, which would normally be celebrated in a summit meeting of all NATO leaders in Washington. This year there will be no such gathering in Washington, but a meeting instead of foreign ministers.