Why the Fires in Australia Are So Bad 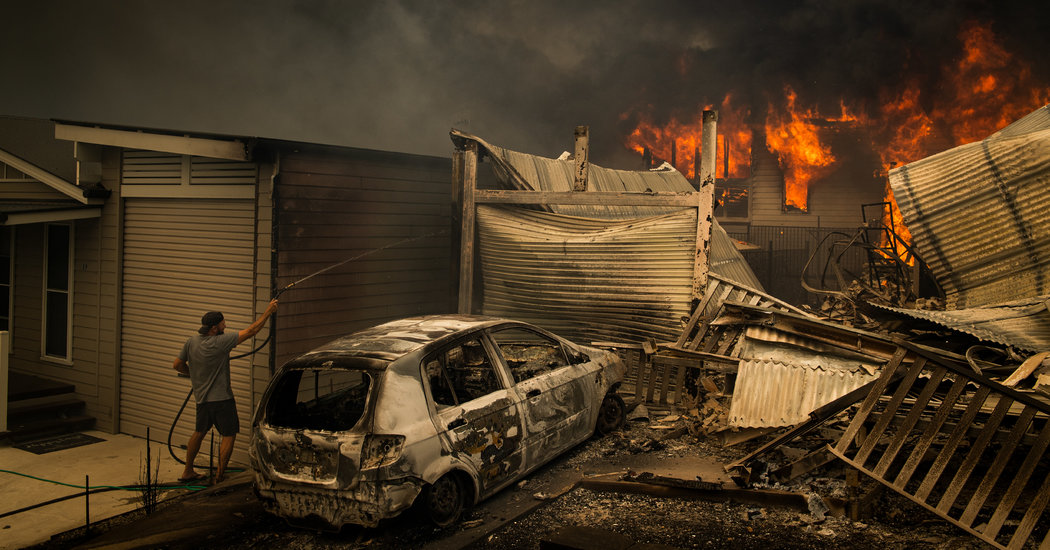 This fire season has been one of the worst in Australia’s history, with at least 15 people killed, hundreds of homes destroyed and millions of acres burned. And summer is far from over.

This week, thousands of residents and vacationers in southeastern Australia were forced to evacuate to shorelines as bush fires encircled communities and razed scores of buildings. Military ships and aircraft were deployed on Wednesday to deliver water, food and fuel to towns cut off by the fires.

The hot, dry conditions that have fueled the fires are nothing new in Australia. Here’s why this fire season has been so calamitous.

What is causing the fires?

As a severe heat wave gripped most of the country in mid-December, Australia recorded its hottest day on record, with average highs of 107.4 degrees Fahrenheit, or 41.9 degrees Celsius. The heat wave is continuing this week in southeastern Australia, with temperatures expected to reach 105 in Canberra, the capital.

The extreme heat has followed the driest spring on record. Most of New South Wales and Queensland have been experiencing shortfalls in rain since early 2017. The drought has hit the country’s most productive agricultural areas, including some of those now ablaze.

How extensive are the fires?

On Sept. 9, the Binna Burra Lodge, a historic getaway in the lush mountains of Queensland, was destroyed in a bush fire. The loss, and the blazes in the surrounding rain forests, alarmed scientists, who said that such fires were extremely rare in the usually cool and wet area.

The fires have burned across the country in recent months, affecting four out of six states. Australia’s east coast has been hardest hit. By early November, 1,500 firefighters were battling 70 fires in New South Wales, the southeastern state that includes Sydney.

On Nov. 11, the state issued a “catastrophic” fire danger rating for the first time in the decade that the current warning system has been in place. In Sydney, which issued a total fire ban, heavy smoke has discolored the sky on many days, and air quality there has at times been among the worst in the world. On Tuesday, social media was filled with photos of blazing red skies and people fleeing to beaches between Sydney and Melbourne.

What is the damage so far?

About 10 million acres have burned in New South Wales, destroying nearly 1,000 homes. Around 90 fires are currently raging in the state, with about three dozen more to the south in Victoria.

In total, roughly 12 million acres have been burned by the fires. By comparison, about 1.9 million acres burned in the 2018 fires in California; those fires, which were the state’s most destructive, killed about 100 people.

As the blazes swept southeastern Australia early this week, the fire season’s death toll reached at least 15, and officials said it was likely to rise. At least seven people were killed on Monday and Tuesday in New South Wales — including a volunteer firefighter, the third to die this season — and another person died in Victoria.

Who is fighting the fires?

Tens of thousands of firefighters, the vast majority of them volunteers, have worked for weeks, sometimes putting in 12-hour days. The strain on the firefighters has raised questions about the country’s reliance on a volunteer force.

Australia’s federal government announced last week that volunteers in New South Wales — as well as other states, if they requested it — would receive compensation of up to about $4,000. That change in policy was initially opposed by Prime Minister Scott Morrison.

This week, as the fires caused widespread destruction, Australia deployed its military and called on its allies for help. The Australian Defense Force said on Tuesday that it would send Black Hawk and Chinook military helicopters, airplanes and naval ships to Victoria and New South Wales.

The government also asked the United States and Canada to provide water tanker aircraft. Canada has pledged to send more than 30 firefighters to help the Australians.

Is climate change to blame?

The devastating start to the fire season confirmed what scientists have been predicting: that Australia’s bush fires will become more frequent and more intense as climate change worsens.

Few if any other developed countries are as vulnerable to changing climate as Australia, according to scientific reports.

Australia is normally hot and dry in the summer, but climate change, which brings longer and more frequent periods of extreme heat, worsens these conditions and makes vegetation drier and more likely to burn.

The catastrophic fire conditions have put an intense focus on the Australian government’s failure to reduce emissions of carbon dioxide, which traps heat when released into the atmosphere.

Even as emissions continue to soar, the country, currently governed by a conservative coalition, has found it difficult to reach a political consensus on energy and climate change policy. Those politics, in part, are influenced by Australia’s long mining history and its powerful coal lobby.

How does weather affect the blazes?

Climate and weather are different but related concepts. Climate is a description of expected long-term weather patterns in a specific place, while weather is the mix of events occurring in the atmosphere at a particular time and place — think temperature, wind and precipitation.

A changing climate has meant an increase in temperatures in the Indian and Southern Oceans, which in turn has meant drier and hotter weather across Australia this summer.

The most dangerous fire days occur when hot, dry air blows from the desert center of the continent toward the populous coasts. A weather front — where air masses at different densities meet — can cause the direction of the wind to change rapidly. Ultimately, that means bigger fires spreading in multiple directions.

Bush fires can be so large and hot that they generate their own dangerous, unpredictable weather systems. These so-called firestorms can produce lightning, strong winds and even fire tornadoes. What they don’t produce is rain.

The volunteer firefighter who died on Monday was crushed after a fire tornado lifted a fire truck off the ground.