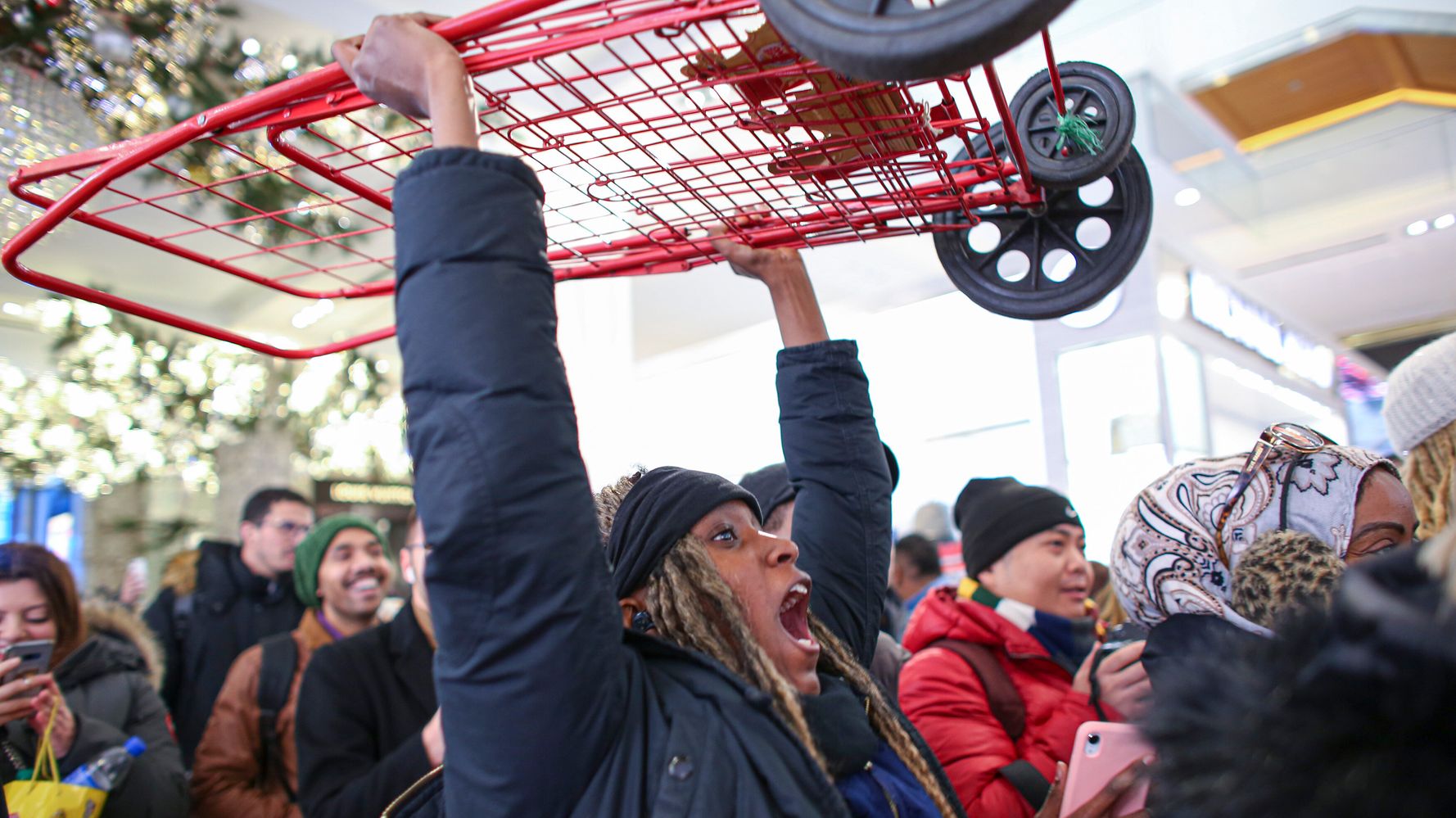 Like everything else in 2020, holiday shopping will look a lot different thanks to the coronavirus pandemic. If you’re one of the many Americans who head out every Friday after Thanksgiving for some high-stakes retail therapy, your plans will likely have to change this year.

But instead of setting up in front of your laptop to chase Black Friday deals online, consider skipping this retail holiday altogether.

If there was ever a year to boycott Black Friday, it would be the dumpster fire that is 2020. Here are five reasons why.

Ethan Hamilton, a registered nurse in Los Angeles, staunchly opposes the concept of Black Friday. Not only does the holiday help support businesses that force employees to work on Thanksgiving, he said, but it detracts from the goal of spending time with loved ones and expressing gratitude.

“Black Friday subverts that and makes it about materialism,” Hamilton said. “That’s compounded by the fact that Christmas puts undue pressure on poorer folks to spend money beyond their means in order to conform to societal expectations for giving and receiving.”

Black Friday is, and has always been, a shameless celebration of consumerism. Spending on this day skyrockets year over year. In 2019, shoppers spent a record $7.4 billion online alone, up about 20% over 2018.

It’s a great day for the bottom lines of retailers, but not so much for shoppers, who are pressured to overspend. Forty-four percent of Americans took on holiday debt in 2019 with an average balance of $1,325, according to a survey by Magnify Money, a personal finance site. More than three-quarters of borrowers weren’t able to pay off the debt by January, making those Black Friday “deals” much less attractive as time went on.

However, this year has been particularly tough on wallets. Shutdowns have forced businesses to halt operations, many permanently. Millions of Americans have lost work, and the U.S. unemployment rate has reached record numbers. As a result, a quarter of adults have had trouble paying their bills since the coronavirus outbreak started, while a third have pulled money out of their savings or retirement accounts to get by, according to Pew Research Center. Add in the fact that the pandemic is nowhere near under control, and Black Friday 2020 presents a health hazard, too.

Since the pandemic began, close to 100,000 businesses have permanently closed. Small businesses ― defined as private companies with fewer than 500 employees ― have especially struggled to survive this year due to less cash flow and smaller operating margins.

These businesses make up 99.9% of all businesses in the country. They account for about half of all private jobs and are often considered the “lifeblood” of the U.S. economy. And it’s these companies that need a major boost in revenue the most right now, but they’re the least likely to get it.

Black Friday has never been about shopping small. Retail giants such as Target, Walmart, Apple and Amazon can afford to pump billions of dollars into Black Friday advertising and slash their prices to entice shoppers. And now, the pandemic significantly limits the number of people who can shop in-store, making it nearly impossible for businesses without a robust e-commerce presence to compete online.

“I feel strongly that folks should boycott Black Friday because it typically only benefits large nationwide retailers,” said Dave Karraker, a small-business owner and a board member of the Castro Merchants Association, the business association for San Francisco’s iconic Castro district. In the Bay Area alone, he pointed out, more than 5,000 small businesses were forced to shut down during the pandemic. Of those, 2,000 closed for good.

While the thrill of chasing bargains during Black Friday may make your heart race, spending the extra few dollars at a neighborhood small business could mean the difference between life and death for that retailer, Karraker said.

“It could mean the difference between a vibrant, enriching neighborhood or a street full of boarded-up storefronts,” he said.

3. Meanwhile, Billionaires Are Profiting Off Of The Pandemic

The coronavirus has killed at least 243,000 Americans so far and left millions more in poor health, but things couldn’t be better for the nation’s 1%. Since mid-March, the collective wealth of America’s billionaires has increased by a whopping $931 billion ― not in spite of the pandemic, but because of it.

Take Amazon CEO Jeff Bezos, the richest person in the world, who enjoyed an 80% increase in his net worth between March 16 and October 13 (for a whopping total of $203 billion). That’s largely thanks to the fact that people couldn’t shop in stores and instead relied on delivery by his retail monopoly for everything from toilet paper to toothpaste.

Technology billionaire Elon Musk has seen his wealth more than triple since the pandemic started, as Tesla stock soared to an all-time high. (Musk has also repeatedly downplayed the seriousness of COVID-19 and allegedly pressured employees to get back to work despite local health restrictions).

Mark Zuckerberg added another $54.7 billion to his name, also due in large part to surging stock values as more people turned to Facebook as a means of connection during lockdowns.

If you’re wondering whether America’s richest CEOs returned a healthy portion of those earnings to coronavirus relief efforts, the answer is: not so much. A Washington Post survey of the nation’s 50 wealthiest people and families found that their publicly announced donations as of June amounted to about $1 billion ― less than 0.1% of their combined wealth.

Aside from the physical and financial toll that Black Friday has on shoppers, there are also environmental consequences.

The promise to deliver items in just a couple of days (we’re looking at you, Amazon Prime) requires putting thousands more trucks and ships in service, adding to the pollution that’s already in our air and water. There’s also the ridiculous amount of packaging involved, which floods recycling centers and ends up in landfills.

That’s not to mention how so much of the crap that’s purchased during the Black Friday shopping frenzy ends up in the hands of people who don’t even want it. In fact, 61% percent of Americans say they received at least one unwanted gift over the holidays, according to a 2019 survey by Finder.com, a consumer savings site. That equates to $15.2 billion spent on unwanted gifts. Clothing and accessories make up the most gifted but unwanted items, fueling the carbon-intensive fast-fashion industry that contributes to overflowing landfills.

5. You’re Probably Not Even Saving Money

Aimey Tunthasuwatana, an administrative professional in San Francisco, stopped participating in Black Friday years ago. Tunthasuwatana said she’d rather not waste time waiting in line for so-called deals that aren’t really any good.

“It’s just not worth waking up early, standing in the cold, fighting over objects that aren’t that much of a discount as when they offer discounts other times of the year,” she said.

Tunthasuwatana is on to something: The reality is that, for the most part, Black Friday deals are garbage. Each year, the savings offered become even less compelling. And a 2016 study by the personal finance site NerdWallet found that some stores inflated the amount of some Black Friday discounts to make deals seem better than they actually were.

The truth is, the best shopping deals of the year aren’t actually on Black Friday.

So before you risk your health and budget in order to make the richest people in the world even richer, stop and consider why you feel pressured to do so. Black Friday is a carefully crafted illusion designed to benefit a small number of people ― and you’re probably not one of them.