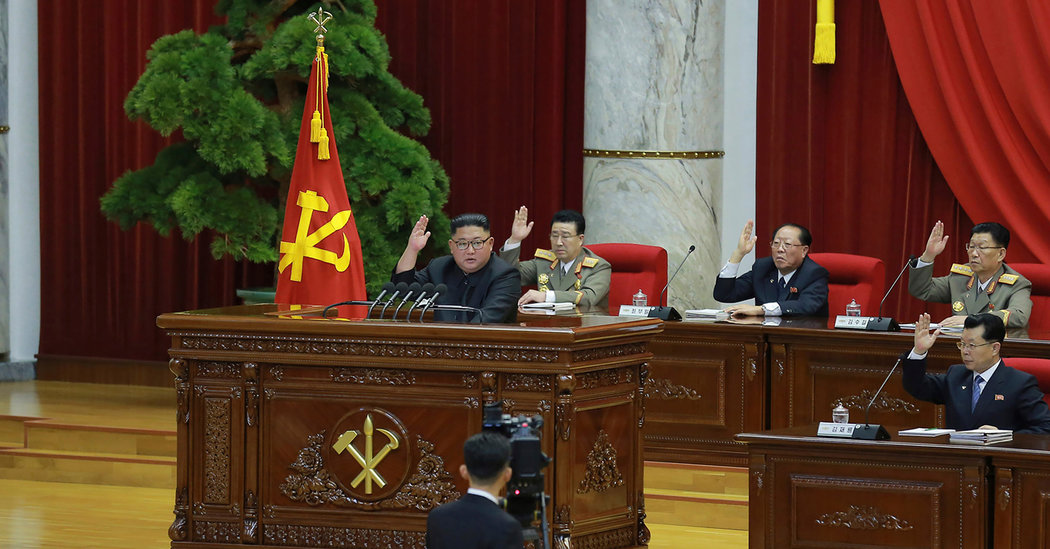 SEOUL, South Korea — North Korea’s leader, Kim Jong-un, has long threatened to “find a new way” if the United States persists with sanctions. And when North Korea announced his “revolutionary” new way on Wednesday, the strategy revealed both a defiance and a deep caution in confronting President Trump.

Mr. Kim vowed, in a lengthy policy statement, to expand his country’s nuclear force, making vague threats to show off a “new strategic weapon” in the near future​ and “shift to a shocking actual action.” He warned that North Korea would not be bound by a self-imposed moratorium on nuclear and long-range ballistic missile tests.

But he also moderated those threats by leaving out the specifics. Mr. Kim did not explicitly say that he was formally lifting the test moratorium or that he was terminating diplomacy. Instead, he said his efforts to expand his nuclear weapons capabilities could be adjusted “depending on the U.S. future attitude.”

It’s a wait-and-see approach that leaves room for more negotiations.

Analysts say that Mr. Kim is making a calculation against the backdrop of the political uncertainty in the United States, where Mr. Trump faces both a Senate impeachment trial and an election. The North Korean leader, they said, doesn’t necessarily want to rush to strike a deal that could be overturned if Mr. Trump does not win a second term.

As he waits, Mr. Kim can continue to play the role of tough guy, increasing the stakes in his nuclear brinkmanship. North Korea can expand its nuclear arsenal, produce more bomb fuel, build more nuclear warheads and improve its missile capabilities.

Less predictable is whether or when Mr. Kim might deliver an infuriating message to Mr. Trump by testing a nuclear weapon or intercontinental ballistic missile.

Such a test could precipitate another “fire and fury” response from Mr. Trump. When Mr. Kim last conducted such tests, in 2017, Mr. Trump threatened to “totally destroy North Korea,” inciting fears of possible war.

Tensions eased after North Korea declared a test moratorium in April 2018. And after Mr. Trump met with Mr. Kim in Singapore later that year, the president said the two “fell in love.”

That moratorium remains the best outcome Mr. Trump can cite from his on-and-off diplomacy with Mr. Kim — one that the North Korean leader may be wary of yanking away too soon.

By treading carefully, Pyongyang also avoids more economic pain. Launching a long-range missile would set off another round of United Nations sanctions, and such tests could also provoke China and Russia at a time when Mr. Kim strongly needs their help to blunt the pain of current international measures.

Those sanctions required China, Russia and other countries to send North Korean workers home by late last month, depriving Mr. Kim’s government of a key source of hard currency. North Korea also increasingly depends on Chinese tourists as an alternative source of income, and Mr. Kim has recently built a number of tourist zones to attract them.

In his policy report this week, Mr. Kim acknowledged that his country’s efforts at economic reform faced “grave problems” and were “not making visible progress,” according to the state news media. He also reported “evil practices and stagnation” in key industries and criticized his economic officials for “merely shouting the slogan of self-reliance” while lacking leadership and “responsibility” to revamp the economy.

(The North’s state-run news agency watered down Mr. Kim’s criticism in its English version of the report, indicating that it was mostly for domestic consumption.)

Mr. Kim also indicated that he was preparing for a “protracted” standoff with Washington, exhorting North Koreans to accept it as “a fait accompli that we have to live under the sanctions.” After 18 months of faltering diplomacy, he said he was convinced that his country should stick to “self-reliance” rather than embracing the “brilliant transformation” of its economy that Mr. Trump promised if Pyongyang abandoned its nuclear weapons.

Mr. Kim also called on his people “never to barter the security and dignity” that the North’s nuclear deterrent provided, “even though we tighten our belts.”

With that, he was essentially admitting that his previous approach with Washington has failed.

In 2012, in his first public speech as the country’s leader, Mr. Kim had promised that North Koreans would “never have to tighten their belts again.” When he convened the party’s Central Committee the following year, he declared the parallel pursuit of economic growth and a nuclear arsenal. And in an April 2018 committee meeting, Mr. Kim said that he had completed his nuclear force and could therefore now halt nuclear and ICBM tests and focus entirely on economic growth.

Mr. Kim met Mr. Trump in Singapore two months later. But talks between the two broke down last February in Vietnam, and the two leaders failed to reach a denuclearization deal. Mr. Kim returned home empty-handed, without the sanctions relief that his country badly needed to achieve economic growth.

That stasis led to the deadline set by Mr. Kim, who warned that the United States had until the end of 2019 to offer concessions. Pyongyang promised a “Christmas gift” if Washington didn’t make progress on lifting sanctions, making an implicit threat that North Korea might return to its old ways and end the self-imposed moratorium.

“​Kim’s long buildup to his New Year message has inadvertently made North Korea look constrained,” said Prof. Leif-Eric Easley at Ewha Womans University in Seoul. “He tries to use China and Russia for financial benefit, but doesn’t want to appear dependent or beholden. He pushes his military engineers to develop more sophisticated weapons, but has to consider the risks of tests failing. He wants to increase diplomatic pressure on South Korea and the United States, but knows a major provocation is likely to bring more sanctions upon his regime.”

On New Year’s Day, Mr. Kim did not face his people with a nationally televised speech as he had done in previous years. Instead, the state news media carried his policy statement, which came after a four-day meeting of the Workers’ Party’s Central Committee, North Korea’s highest decision-making body.

Mr. Kim’s new guidelines meant that “North Korea will give up denuclearization talks with the United States, accept a prolonged standoff and sanctions as reality, and strengthen its self-empowerment, including its nuclear and missile capabilities,” said Cheong Seong-chang, a senior analyst at South Korea’s Sejong Institute.

And Mr. Kim does appear to be giving the hard-line military a more prominent role in his government, even if it is unclear when and whether he will test an ICBM.

North Korea’s state news media recently reported that he was expediting the development of new weapons technologies, such as solid-fuel missiles that are harder to intercept and a new submarine-launched ballistic missile.

“We should expect that elements of the regime favor tests of several new systems, which likely include new solid-fuel and intercontinental-range missiles, as well as new warhead designs,” said Adam Mount, a senior fellow at the Federation of American Scientists in Washington.

“As talks stalled,” Mr. Mount said, “these elements will have steadily gained in influence.”