Venezuela Opposition Leader Is Arrested After Proposing to Take Power 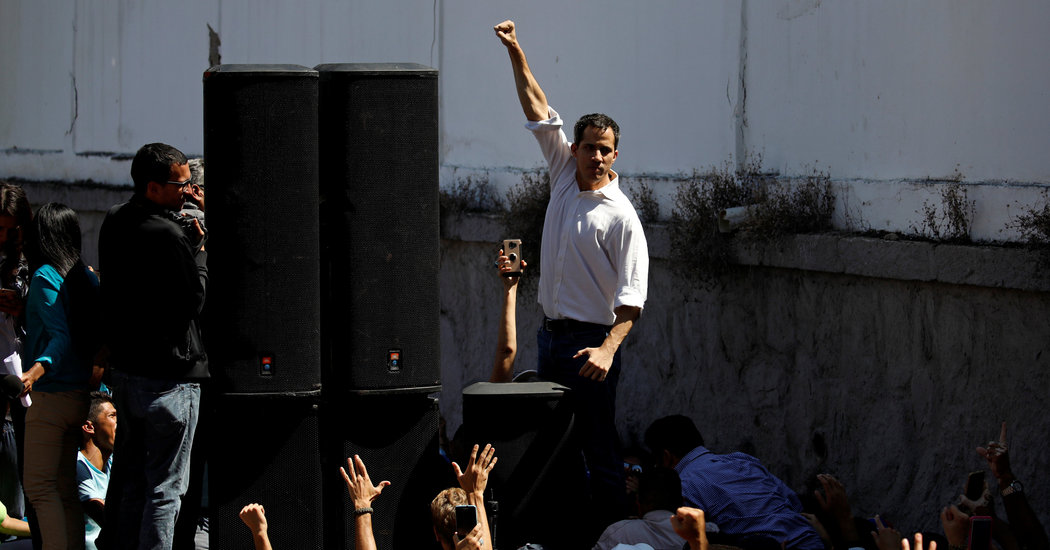 CARACAS, Venezuela — The president of Venezuela’s opposition-controlled National Assembly was briefly arrested on Sunday, two days after declaring that he was prepared to take over temporarily as the country’s leader in a renewed push to oust President Nicolás Maduro from power.

The opposition leader, Juan Guaidó, was captured when a van he was traveling in was stopped on a highway on Sunday morning.

A video recorded by a driver on the highway appeared to show masked, heavily armed agents from the Bolivarian National Intelligence Service pulling Mr. Guaidó from his vehicle and pushing him into a white van before driving away.

He was released shortly after, according to Edward Rodríguez, the head of communications for the National Assembly. Mr. Guaidó then traveled to the northern city of La Guaira, where he was due to participate in a town hall event with members of the public.

Mr. Maduro was sworn in for a second term as president on Thursday, after an election that was widely denounced by other countries as fraudulent. During his six years in office, the country’s economy has unraveled, leading to widespread hunger and violence. An estimated three million people have fled Venezuela since the crisis took hold.

On Friday, Mr. Guaidó, 35, called for Venezuelans to take the streets in protest against Mr. Maduro’s continuing rule, and asked the armed forces to support his becoming interim president while new elections are held.

Mr. Guaidó argued that the Constitution gave him “the legitimacy to carry out the charge of the presidency over the country to call elections,” adding: “But I need backing from the citizens to make it a reality.”

The National Assembly, which Mr. Guaidó leads and which is controlled by lawmakers who oppose Mr. Maduro, was essentially nullified in 2017 when the president created a new Constituent Assembly. That body, which was given broad powers to write and pass legislation, is controlled by supporters of Mr. Maduro.

Government reaction to Mr. Guaidó’s appeal on Friday was scarce, but Iris Varela, the minister who oversees the prison service, posted a threat to the opposition leader on Twitter: “I have your cell ready, with your uniform. I hope you name your cabinet quickly so we know who is going with you.”

Jorge Rodríguez, the Venezuelan communications minister, called Mr. Guaidó’s arrest “arbitrary” and said it had not been ordered by the government.

“We have learned that there has been an irregular situation where a group of officials, acting unilaterally, initiated an irregular procedure against congressman Juan Guaidó,” Mr. Rodríguez said, adding that the matter had been “solved.”

“Those officials who volunteered to install this ‘show’ are being dismissed and subjected to the most stringent disciplinary procedures,” Mr. Rodríguez said.

During his speech in La Guaira, Mr. Guaidó questioned the communication minister’s explanation. “If it was something spontaneous, then who is commanding?” he said.

Two journalists covering Mr. Guaidó’s arrest were also detained. The journalists, Osmary Hernández of CNN Español and Beatriz Adrián of Caracol Radio, were arrested in the headquarters of the national intelligence service in central Caracas.

“We have just been detained by members of the Sebin,” Ms. Adrián said in an interview with Caracol, using the acronym for the intelligence service. “They are pointing at us with long guns and asking us to end this call.”

The Foreign Press Association of Venezuela said that both journalists were released several hours later.