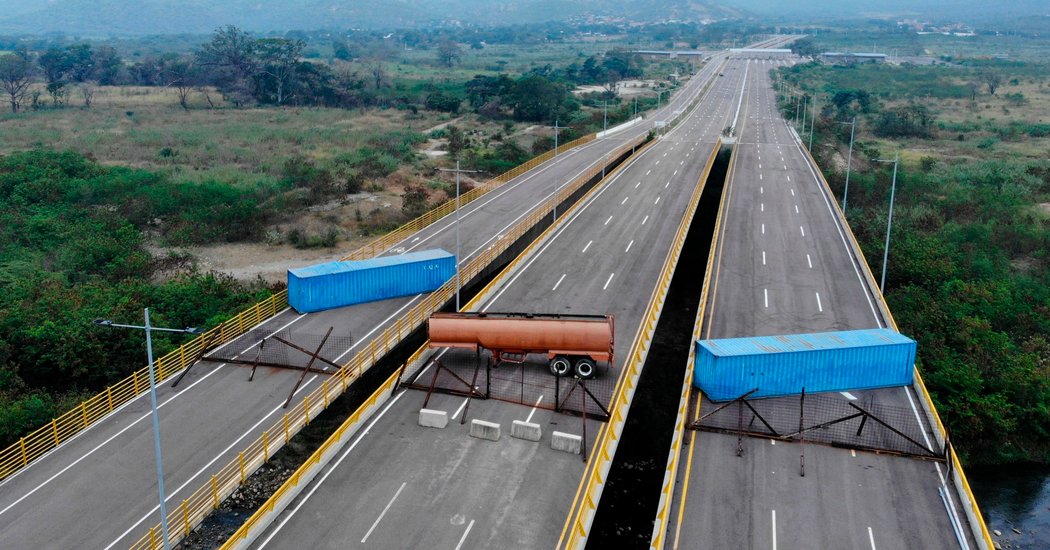 The Venezuelan military has blockaded a major highway link with Colombia to prevent opponents of the government from bringing food and medicine into Venezuela, a country gripped by life-threatening shortages and a deepening political crisis.

Troops positioned truck trailers and shipping containers to block the lanes of the Tienditas Bridge on the border in northwestern Venezuela on Wednesday.

But it was not clear what effect the blockade, a show of defiance by the government of President Nicolás Maduro, would have. The first convoy of trucks carrying aid from the nearby city of Cúcuta, Colombia, had not yet approached the border, and there were other places it could cross.

The American secretary of state, Mike Pompeo, wrote on Twitter that “the Venezuelan people desperately need humanitarian aid,” and called on the government to let it into the country.

Opposition groups announced plans this week to deliver tens of millions of dollars of aid from the United States, from Colombia and from Venezuelans abroad, undermining the rule of Mr. Maduro, whose government had vowed to block the supplies.

International aid groups, including the Red Cross and Caritas, have not taken part in the effort, fearing that doing so would politicize the delivery of desperately needed supplies and would appear to be taking sides in Venezuela’s power struggle.

Mr. Maduro’s authoritarian, leftist government has presided over an economic collapse that has endangered the lives of millions of people and driven millions of others to leave the country. He was elected last year to a second term, but the vote was marred by allegations of coercion and fraud.

He was sworn in for his new term last month, but the National Assembly, controlled by opposition parties, called Mr. Maduro’s government illegitimate. The Assembly’s leader, Juan Guaidó, declared himself interim president last month and promised to organize new elections.

The United States and dozens of other countries have recognized Mr. Guaidó.

The aid shipment represents a challenge to Mr. Maduro’s authority and to his ability to provide for the nation. (“We are not beggars,” he recently said.) For his opponents, it is a test of their ability to deliver on promises and to win supporters.

Mr. Guaidó said recently that he hoped the aid would persuade security forces to abandon the government and rally around the opposition. “We’re putting the ball in their court,” he said.