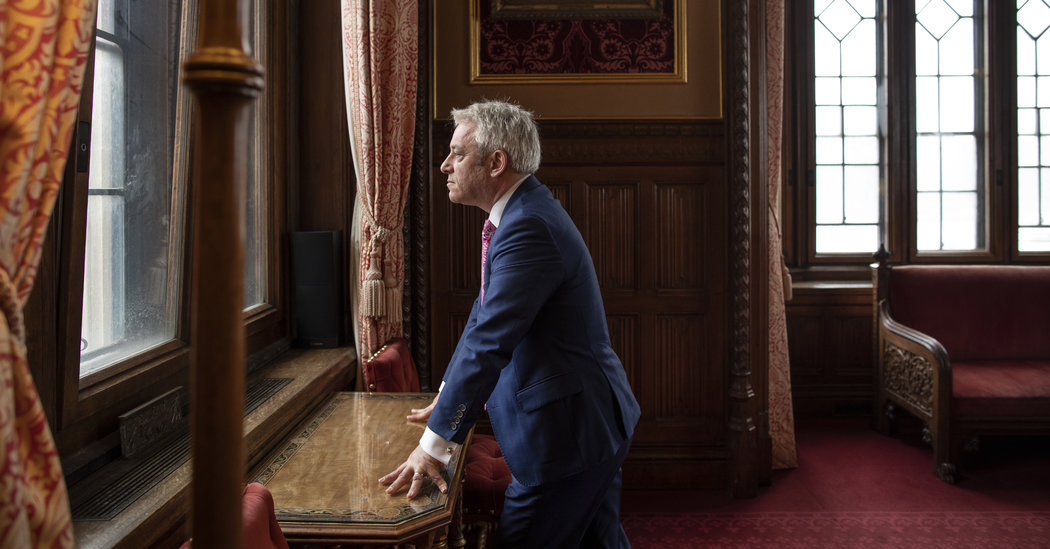 LONDON — For more than 600 years, it has been one of the top jobs in Britain. Perks include an apartment next to Big Ben and better pay than the prime minister. And, if you like the sound of your own voice — as the incumbent seems to — there is the added bonus of hearing it broadcast, sometimes around the globe.

With his familiar, braying rebuke — “Order! Order!” — his cheerful put-downs and his constant battle to control a cacophonous and unruly Parliament, the speaker of the House of Commons, John Bercow, has become something of an international celebrity, raising not just his own profile but also that of his successor.

Little wonder, then, that with Mr. Bercow about to step aside after a decade, no fewer than nine lawmakers are vying for the job.

The contest comes at a moment of extraordinary flux for Parliament, with division and paralysis over Britain’s withdrawal from the European Union exposing lawmakers to the wrath of many Britons.

And, because of the wide powers of the speaker, decisions made by Mr. Bercow’s successor could determine the fate of Brexit — the battleground that has made him, for supporters, a heroic defender of democracy, and to opponents a menace to Britain’s unwritten constitution.

Mr. Bercow not only presides over Parliament’s main debates but is the ultimate arbiter of the arcane rules of the House of Commons. He has been a thorn in the side of the government, championing the rights of backbenchers, or lawmakers who are usually consigned to following the orders of party leaders, at the expense of members of a government without a parliamentary majority.

On Saturday, for example, it was a cheerful Mr. Bercow who decided to allow a vote on a critical amendment that was approved, delivering the latest setback to Prime Minister Boris Johnson’s Brexit strategy.

Speakers tend to be seen as either helpful to the government or the opposite, and there is not much dispute about how to categorize Mr. Bercow. He has worked relentlessly to ensure that Parliament plays what Ms, Lilly called “a vital role in deciding what the shape of Brexit should be.”

Lawmakers plan to vote on Nov. 4 on a successor who must abandon party political affiliation, refrain from voting (except in the case of a tie) and take responsibility for administrative tasks, including a costly renovation of the crumbling parliamentary buildings.

The victorious candidate will assume one of the grandest and most important jobs in politics — a position so ancient that it makes the prime ministership, dating from the 18th century, look like a recent development.

Thomas Hungerford was the first to hold the speaker’s title, in 1377, although presiding officers were identified as far back as 1258, when Peter de Montfort is thought to have fulfilled that role in the so-called Mad Parliament held at Oxford that year.

To contemporary critics, such a description could apply to the current House of Commons — tormented by Brexit, prone to yelling and inflammatory language and presided over by the booming voice of Mr. Bercow.

Yet, while he has received plenty of vitriolic abuse, historically speaking, Mr. Bercow can count himself lucky: Seven of his predecessors were executed between 1394 and 1535. In 1510, Henry VIII had two former speakers beheaded in a single day.

But in 1642, Speaker William Lenthall wrote himself into the history books by defying Charles I’s attempt to arrest five lawmakers for treason, in so doing defending the rights of the House of Commons. (Since then, no king or queen has set foot in the chamber.)

So the past hangs over every speaker, who lives in a grand, four-bedroom apartment containing an imposing dining room and a canopied bed designed to accommodate the monarch.

The Speaker’s House hosts glittering receptions and dinners and has an entertainment allowance to match.

But the job also involves leading a committee responsible for administration, and last year there were calls for Mr. Bercow’s resignation following a report that concluded that bullying and harassment in Parliament were not being dealt with because of a culture of “acquiescence and silence.” Mr. Bercow has faced personal accusations of bullying, which he denies.

In a wood-paneled meeting room in the House of Commons, five men and four women recently made their pitches to succeed him, answering questions about their agendas, including how they would curtail clapping by lawmakers — deemed by most a modern-day abomination — and what they would wear if they end up sitting beneath the silk canopy that tops the speaker’s chair.

Most support Mr. Bercow’s decision to ditch the more antiquarian trimmings of the speaker’s uniform. Though he wears a black silk gown, he abandoned the waistcoat, cuffs and winged collar worn by his predecessor, preferring a lounge suit and tie. (The last speaker to wear the full outfit, including a long-bottomed wig, knee breeches and tights, was Bernard Weatherill, speaker from 1983 to 1992.)

But there is less consensus about the rest of Mr. Bercow’s record. While several praised his defiant support for backbenchers and willingness to let them challenge the government, others think a change of style is called for.

One contender, Chris Bryant, a Labour lawmaker, wants to be “an umpire, not a player,” while another candidate, Shailesh Vara, a Conservative, called Mr. Bercow a “playground bully” who has “tarnished the role of speaker” through bias and by demeaning colleagues.

Some of the criticism is tactical in the hunt for lawmakers’ votes, and some breaks along ideological lines because Mr. Bercow went against precedent to allow Parliament to thwart the government over Brexit. He allowed lawmakers to take over the business of the House of Commons, passing legislation designed to prevent Britain leaving the European Union without an agreement.

Asked why they want the job, the contenders stress their qualities and profess their love of Parliament — and some even claim not to know what the salary is. (At around £155,000, or just over $200,000, it is slightly more than the prime minister accepts.)

The favorite seems to be Lindsay Hoyle, a deputy speaker and Labour lawmaker from northern England, who refused to say how he voted in the 2016 Brexit referendum. Mr. Hoyle promised to be neutral and fair, and to hold the executive to account. “I want to make this place happy,” he added, setting himself arguably a harder task.

Another prominent candidate is Harriet Harman, a Labour lawmaker who is the body’s longest-serving woman, who said she would be the “champion of Parliament.”

Other contenders are the Labour lawmakers Rosie Winterton and Meg Hillier, and the Conservatives Eleanor Laing, Edward Leigh and Henry Bellingham.

The transition is a big moment for an institution that likes to think of itself as the mother of parliaments, yet seems to many voters to behave more like an overindulged, entitled child.

“The choice of speaker really does matter,” Ms. Lilly said. “The House of Commons is an institution facing all sorts of practical challenges, and there is fairly low public faith in members of Parliament.”

While most contenders approve of Mr. Bercow’s defense of backbenchers, some think he was too egotistic, talked too much and went too far, for example by too frequently hauling ministers to the chamber at short notice to answer “urgent questions” from lawmakers.

None of his prospective successors seem to be running as the continuity candidate. It’s a matter of strategy, Ms. Lilly said: “There is a lot of implicit and explicit criticism of John Bercow, and there does seem to be some concern that the speaker should not be the story.”