U.S. Launches Airstrikes on Iranian-Backed Forces in Iraq and Syria 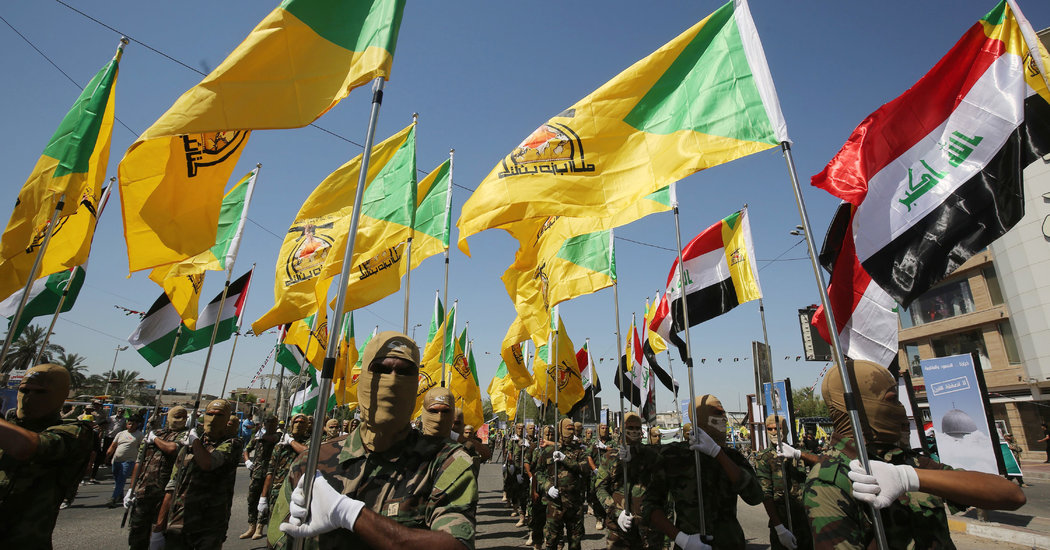 WASHINGTON — The United States military on Sunday struck five targets in Iraq and Syria controlled by an Iranian-backed paramilitary group, the Pentagon said, a reprisal for a rocket attack on Friday that killed an American contractor.

The airstrikes, carried out by Air Force F-15E fighter planes, hit three locations in Iraq and two in Syria controlled by the group, Kataib Hezbollah. Jonathan Hoffman, the chief Pentagon spokesman, said the targets included weapons storage facilities and command posts that were used to attack American and partner forces.

A United States response to an attack that kills or wounds Americans is not unusual. But Sunday’s retaliation involved direct strikes on Iranian proxies, making it particularly dangerous ground.

Since the United States military returned to Iraq in 2014, Iranian-backed forces and American forces have refrained from attacking each other because of a common enemy: the Islamic State. But ISIS has lost its territory, and tensions have risen between Tehran and Washington over the Trump administration’s “maximum pressure” campaign.

Rocket attacks over the last two months by Iranian proxies threatened the uneasy peace, and Friday’s deadly strike broke it. The key question now is whether the American counterattack tamps down the cycle of violence or escalates it.

President Trump was briefed by Defense Department leaders on Saturday, and allowed the strikes to proceed. Senior officials including Defense Secretary Mark T. Esper and Secretary of State Mike Pompeo traveled to Mr. Trump’s Mar-a-Lago resort in Florida on Sunday for discussions with the president, American officials said.

“What we did is take a decisive response that makes clear what President Trump has said for months and months and months,” Mr. Pompeo said on Sunday, “which is that we will not stand for the Islamic Republic of Iran to take actions that put American men and women in jeopardy.”

Mr. Hoffman said the United States would conduct additional strikes if the attacks by Kataib Hezbollah did not stop. Iranian proxy forces have carried out 11 attacks over the last two months on bases and facilities housing American contractors and service members, an American official said.

“Iran and their K.H. proxy forces must cease their attacks on U.S. and coalition forces, and respect Iraq’s sovereignty, to prevent additional defensive actions by U.S. forces,” Mr. Hoffman said.

Iran has long supported Kataib Hezbollah by providing weapons and other lethal aid. The group has tight ties with the Quds Force, an elite unit of the Iranian Revolutionary Guards Corps, the Pentagon said. The United States has labeled the Guards Corps a terrorist organization.

Iraq’s Hezbollah fighters are among several armed groups that are close to Iran but also have the imprimatur of the Iraqi government because they fall under the Iraqi security forces. Iraq has deployed the group’s troops to the border with Syria to help defend against the Islamic State. It has also facilitated the movement of Iranian arms and logistical support across the border to Syria, where Iranian troops are assisting President Bashar al-Assad’s government, according to Iraqi and American security experts.

The ammunition facilities that were struck on Sunday held both rockets and drones used by Kataib Hezbollah. The command and control buildings had been used by the group to plot attacks. The ordnance dropped by the F-15Es on the ammunition depots set off several large secondary explosions, American officials said, confirming that the facilities were used to store a significant amount of weaponry.

Sayyid Jaafar Al-Husseini, the Hezbollah military spokesman in Iraq, claimed that 24 were killed and more than 50 wounded. News media reports in Iraq said one man was a commander of a Kataib Hezbollah brigade. American officials have not been able to confirm how many members of the group were killed.

Hezbollah, responding to the attacks, said that “all options were available” and renewed calls for American troops to leave Iraq.

Officials did not identify the precise location of the sites. The strikes in Syria took place in the Euphrates River Valley in the southeast, officials said.

Experts say Tehran miscalculated that Mr. Trump’s desire to avoid war with Iran would restrain the American military if its forces were attacked. Kirsten Fontenrose, a former National Security Council official now with the Atlantic Council, said the current upheaval and protests in Iraq had allowed Iranian proxies to “operate unfettered.” Iran’s stepped-up activity convinced the United States that it needed to act.

“We knew Iran would pursue a policy of continued low-level escalation with the U.S. and allies at least through the U.S. elections,” she said. “Iran knew that President Trump does not want an all-out war. Iran’s mistake was in assuming that U.S. strategic thinking would not adapt to conditions on the ground.”

While Mr. Trump has sought to wind down the American war against the Islamic State in Iraq and Syria, he has built up forces meant to deter against Iranian attacks. Trump administration officials have also said American forces were in Iraq to help counter Iranian influence in Iraq and the region.

As rocket attacks by Iranian proxies have increased in recent weeks, some Defense Department officials have been worried that the situation could escalate beyond the kind of shadow conflict that the United States and Iran have been engaged in.

The death of the American contractor and the response by the Pentagon could potentially lead to further escalation. Iran could respond with a renewed roadside bomb campaign or more powerful rocket and missile attacks, a move that would most likely result in a more aggressive response by the United States.

American military commanders have warned for months about a growing risk of attacks by Iranian proxy forces on American interests and forces in the region, as Tehran chafes against the Trump administration’s renewed economic sanctions and campaign to force it to renegotiate the 2015 nuclear deal.

So far Iran and its proxies have mostly focused on American allies and partners. The United States has accused Iran of striking at oil tankers in the Arabian Sea and launching drone and cruise missile attacks on Saudi oil facilities. Iran also shot down an American drone.

In response, the United States launched a series of cyberattacks, but Mr. Trump backed away from a larger military airstrike.

Kataib Hezbollah launched more than 30 rockets against the base, which is near Kirkuk and is known as K1. The rocket attacks killed the American contractor and wounded four American service members and two members of the Iraqi security forces, Mr. Hoffman said.

That attack was one of the two largest over the last two months and the only one to kill an American citizen, the American official said.

The rising number of attacks in recent months had prompted diplomatic warnings, including private requests to the Iraqi government to pressure Iran to stop the attacks. In addition, Mr. Pompeo and Mr. Esper had said in recent weeks that Iran would be held to account for attacks by its proxy forces on Americans.

While Iran does not always have direct control over its allied paramilitary groups, current and former military officials have long contended that Tehran is able to control the level of violence in Iraq through such groups and its militia. Iran also provides broad direction on what kind of attacks the groups make and how often they target American or allied forces.

The United States military warned the Iraqi government, along with other coalition partners, before the strikes against Kataib Hezbollah.

American officials have also been telling Iraq that their tolerance for the strikes by Iranian proxy forces is low. Mr. Hoffman said that while the United States military is in Iraq at the request of the Iraqi government, American forces reserve the right to act in self-defense.