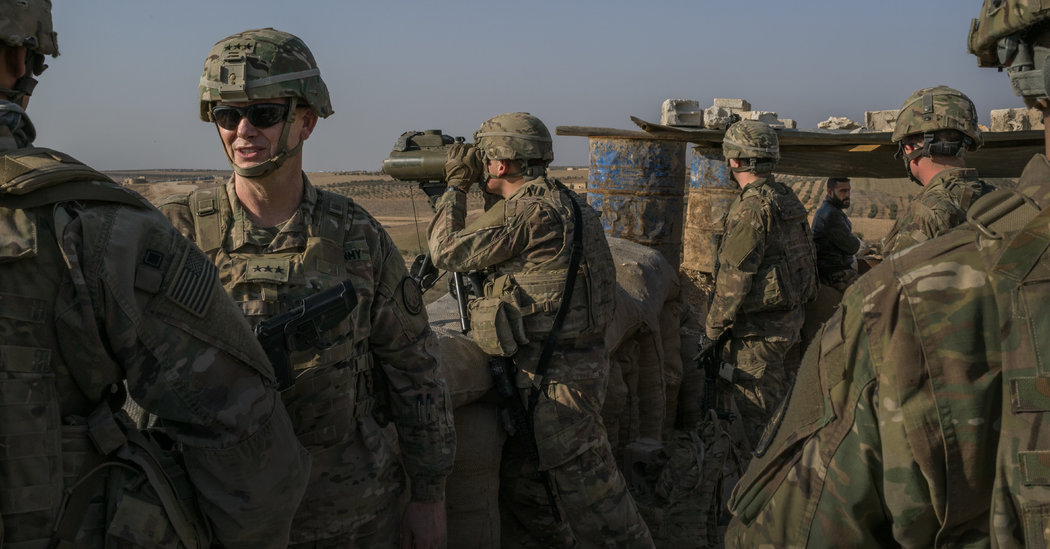 WASHINGTON — The American military has started withdrawing some equipment, but no troops yet, from Syria as part of President Trump’s order to wind down that battleground against the Islamic State, two Defense Department officials said on Friday amid continuing confusion over plans to disengage from one of the Middle East’s most complex conflicts.

The officials said the number of American troops might actually increase slightly in Syria, to help protect the final process of pulling out — an operation that is still expected to take at least four to six months to complete. There are currently about 2,000 troops — mostly Army soldiers and Marines — in northeast Syria or in the Middle Euphrates River Valley to oust the remaining pockets of Islamic State fighters and secure newly-liberated areas from their return.

A vaguely worded statement from the American military headquarters in Baghdad, which is overseeing the fight against the Islamic State, said the withdrawal process from Syria had begun. Last month, officials said, Mr. Trump said that he intended to pull out American troops within 30 days.

But as recently as Sunday, the White House national security adviser, John R. Bolton, had said that the pullout was conditional — based on circumstances that could leave American forces there for months or even years.

The surprise announcement on Friday, from Col. Sean Ryan, the spokesman for the United States-led coalition against the Islamic State, gave no indication of whether any troops were being pulled out or whether the United States was taking other measures that could be considered a withdrawal.

Colonel Ryan said the coalition had “begun the process of our deliberate withdrawal from Syria,” adding that he would provide no further information about “specific timelines, locations or troop movements.”

The announcement, coming days after Mr. Bolton’s remarks, added to a climate of chaos surrounding Washington’s policy on Syria at a time when Turkey has threatened to invade the country.

Mr. Trump has made no secret of his desire to bring the troops home, saying that they were sent to fight the Islamic State and that their mission has nearly been accomplished. In an apparently snap decision following a telephone call with the Turkish president, Recep Tayyip Erdogan, he said last month that he wanted the troops out within a month.

That decision prompted the resignation of two top aides — Defense Secretary Jim Mattis and Brett McGurk, the special presidential envoy to the coalition fighting the Islamic State — and the reformulation by Mr. Bolton, a hawkish adviser whose principal Middle East aim is to contain the ambitions of Iran, which is entrenched in Syria.

Reflecting the confusion, Interfax reported that the spokeswoman for the Russian Foreign Ministry, Maria Zakharova, said in Moscow on Friday that the American military’s announcement added to the Kremlin’s growing doubts that the United States would soon withdraw from Syria.

It seems like Washington “is looking for a reason to stay,” she said. “I cannot share your confidence that they are leaving there because we never saw an official strategy.”

After Mr. Trump’s call for a rapid pullout, discussions with others in his administration led to the timeline being lengthened as diplomats sought to find a way to protect the United States’ Kurdish allies from a Turkish attack and to get Turkey to take over the fight against the jihadists.

The possible swift withdrawal of the American military in northern and eastern Syria alarmed many analysts, who warned that could threaten to hinder the Islamic State and unleash a potentially violent scramble between the other forces in Syria to fill the void.

The United States had intervened in Syria to work with local, Kurdish-led militias to fight the Islamic State, which had established a self-declared caliphate that spanned the border between Syria and Iraq.

As the militants were pushed back, the zone of American influence grew to include roughly one-quarter of Syria’s territory, where the militias set up local councils to conduct basic governance.

The Syrian government and its Russian and Iranian allies want the territory back for several reasons: its oil deposits; its agricultural land; reopening the border with Iraq; and reunification of the country, which has been shattered by a war that began in 2011.

Turkey also has interests in the area and sees the primary Kurdish militia there as a national security threat. It has sent its troops to the Syrian border and threatened to send them into Syria to fight the Kurds.

A United States withdrawal would make it easier for all those forces to make moves into the area, perhaps bringing them into conflict.