U.S. Carries Out Retaliatory Strikes on Iranian-Backed Militia in Iraq 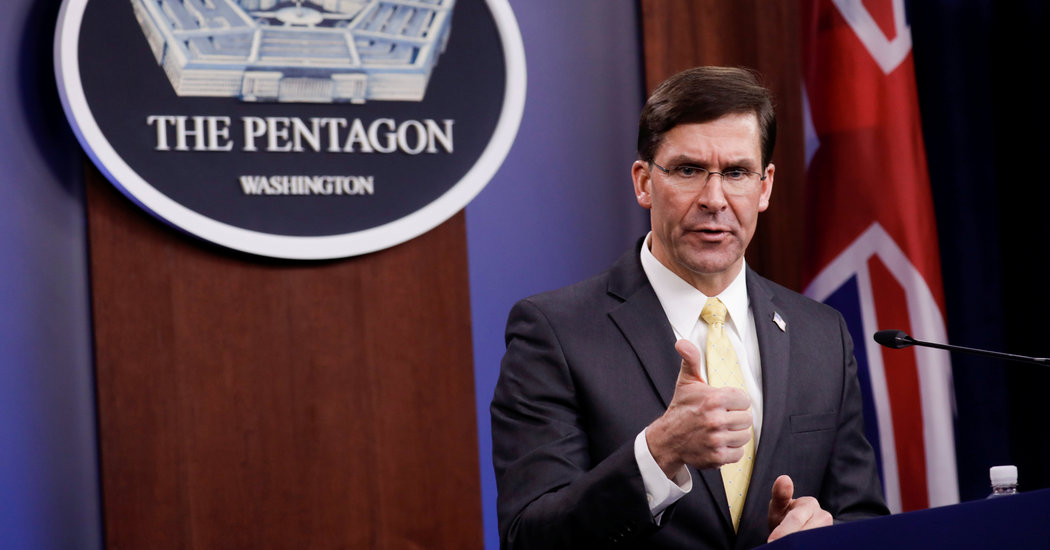 WASHINGTON — United States warplanes struck five targets in southern Iraq on Thursday night, hitting back at an Iraqi militia with ties to Iran that is believed to have been part of a rocket attack on Wednesday that killed two Americans and a British soldier, American officials said.

The airstrikes, which were supported by the British military, targeted the militia Kataib Hezbollah and facilities that were believed to store the type of rockets used in the attack on coalition forces on Wednesday. It is not known how many militia members, if any, were killed, a military official said.

“The United States will not tolerate attacks against our people, our interests or our allies,” Defense Secretary Mark T. Esper said in a statement after the strikes.

Mr. Esper’s language falls in line with a now familiar pattern as Washington moves to curb malign efforts from Iran and its proxies across the region.

But ultimately, the effort has translated into a violent tit-for-tat exchange with an outcome that is anything but clear.

A Defense Department official said the strikes were specifically designed to be punishing and retaliatory — but not to escalate into a conflict with Iran. Another military official noted that the attack was ordered at night in Iraq with the intention of minimizing civilian casualties.

Kataib Hezbollah released a statement on Thursday praising those who had carried out the strikes on Wednesday, though the group denied responsibility. That strike was “a precision jihadi operation,” the statement said. It also signaled that the group hoped to see an increase in operations against the American presence in Iraq.

In December, Kataib Hezbollah was accused of a rocket strike that killed an American contractor, setting off a series of events that led the United States to the brink of war with Iran.

The two Americans killed on Wednesday were with the Army and the Air Force, according to an American official. More than a dozen members of the United States-led military coalition, including those from Poland and civilian contractors, were wounded.

Roughly 30 rockets were fired from a homemade mobile launcher miles outside the base, Camp Taji. More than a dozen hit the sprawling installation about 15 miles north of Baghdad, officials said.

After the rocket attack in December, the United States struck five bases held by Kataib Hezbollah.

Those strikes were followed by a siege of the American Embassy in Baghdad and then a U.S. airstrike that killed the leader of Iran’s elite Quds force, Maj. Gen. Qassim Suleimani, and Abu Mahdi al-Muhandis, a top Iraqi militia leader with ties to Iran.

The rapid pattern of escalation ended weeks later, when Iran launched 16 ballistic missiles at bases in Iraq that housed American forces. No one was killed by those strikes, but dozens had traumatic brain injuries as a result. Some had to be evacuated out of the country.

The American casualties in Taji on Wednesday were part of a deadly several days for United States forces in Iraq. On Sunday, Capt. Moises A. Navas of Germantown, Md., and Gunnery Sgt. Diego D. Pongo of Simi Valley, Calif., both Marine Raiders, were killed during a vicious gunfight against Islamic State fighters in northern Iraq.

The episode prompted a review of current American operations against the Islamic State, given the intensity of the mission and the fact that the Marines had not planned for such a battle in a sprawling cave complex. Members of the American military’s elite Delta Force were ordered to respond and recover the dead.

According to a Pentagon database, before the attack on Wednesday, 19 Americans had been killed in combat in Iraq and Syria since the start of the campaign against the Islamic State, known as Operation Inherent Resolve.