U.S. Allies in Mideast Fear They May Pay Price for Suleimani Killing 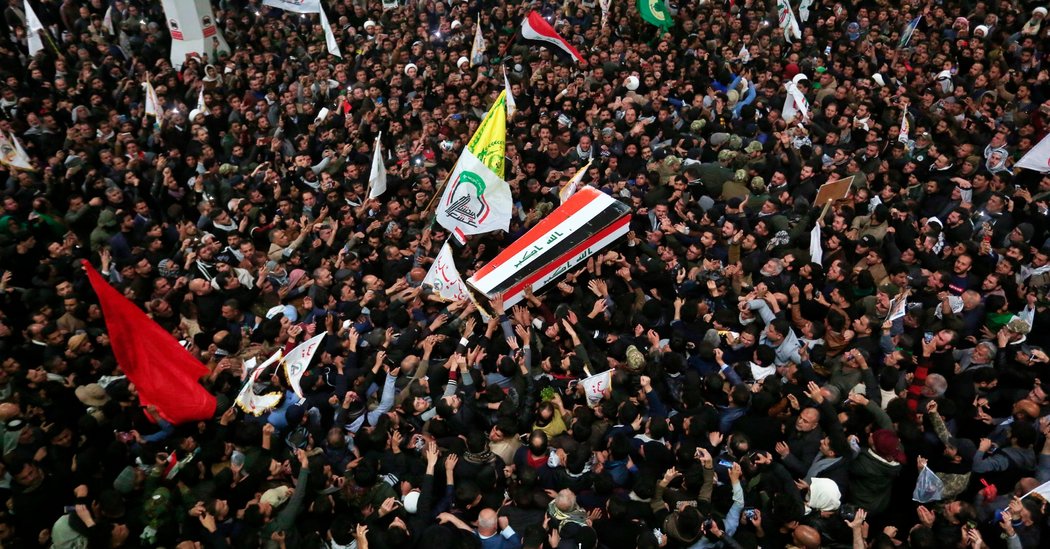 BEIRUT, Lebanon — For years, allies of the United States across the Middle East have sounded the alarm about Iran’s progress in strengthening their enemies, building up arsenals and sponsoring militant groups near or inside their borders to advance Tehran’s interests.

But since President Trump ordered the drone strike on Friday that killed Maj. Gen. Qassim Suleimani, the mastermind of Iran’s regional efforts, however pleased they might have been, the predominate response from America’s friends in the region has been silence.

This mix of private celebration and public caution reflects two driving fears. Many expect that to avoid a spiral of violence with the United States, Iran could avenge General Suleimani’s death by attacking American allies. And if that happens, many of those allies wonder, will Mr. Trump will have their back?

“The entire region is on edge, as we are in unchartered territory,” said Taufiq Rahim, a senior fellow at the foundation New America who works in the Persian Gulf. “There is no way to be ready for what comes next, because anything could be a target.”

The jigsaw layout of American and Iranian influence across the Middle East makes assessing the threat of an Iranian response difficult. The United States maintains close ties with Israel, as well as with a range of Arab states, including Egypt, Saudi Arabia and the United Arab Emirates.

But Iran, often through General Suleimani, has worked for decades to build close ties with the government of Syria and armed groups in Gaza, Lebanon, Syria, Iraq and Yemen, many of them within firing range of United States allies — and close to contingents of American troops deployed in Syria and Iraq.

The spread of that network means that Iran could rely on allied forces to strike at any number of places across the region while giving Iran itself a way to deny responsibility.

As the United States’ regional allies try to anticipate Iran’s next move, they are shoring up their defenses, keeping their distance from Mr. Trump’s decision to kill General Suleimani and even quietly reaching out to Iran directly to try to avert conflict.

The situation is particularly delicate for countries like Saudi Arabia and the United Arab Emirates that sit directly across the Persian Gulf from Iran and have close ties to the United States. Their wealth and vast oil and commercial infrastructure could be attractive targets for Iranian attacks.

The threat against such sites was made clear this past summer, when a surprise drone and missile attack left two oil-processing facilities in Saudi Arabia smoldering and temporarily halved the kingdom’s oil production.

United States officials blamed Iran for the attacks, but Mr. Trump chose to forgo a military response, despite a decades-old commitment to using American might to ensure the free flow of gulf oil.

Many in the region hate Iran for what they see as its efforts to build Shiite militias to advance its interests and undermine Arab states in a majority-Sunni region. That left many pleased, privately at least, that the United States had killed General Suleimani, the most visible face of that project.

Khalid al-Dakhil, a political sociologist in Saudi Arabia, criticized Iran for selling itself to the Arabs as the head of “the resistance” — the regional struggle against the United States and Israel — when it has expended more effort in recent years amassing power in Iraq, Syria and Lebanon.

“What kind of a resistance is this?” he said. “It is a resistance meant to cover the sectarian substance of Iran’s policy in the region.”

While many gulf leaders agree, they have not publicly praised General Suleimani’s killing for fear of attracting Iran’s ire.

“Saudi Arabia and all the gulf countries are just quiet,” Dr. al-Dakhil said. “They don’t want to antagonize the Iranians, because the situation in the region is so delicate, so divided, so sensitive, that you don’t want to stir it up further.”

Prince Khalid bin Salman, the Saudi deputy defense minister and a younger brother of Crown Prince Mohammed bin Salman, flew to Washington this weekend for consultations with United States officials. And on Saturday, Mohammed bin Abdulrahman al-Thani, the foreign minister of Qatar, met with his Iranian counterpart in Tehran.

Exacerbating the nervousness in the gulf are questions about the extent of the support countries can expect from Mr. Trump should they become the target of Iranian retaliation, be it military action, a cyberattack or sabotage, said Barbara Leaf, a former United States ambassador to the United Arab Emirates who is now at the Washington Institute for Near East Policy.

Gulf leaders, she said, want to know “what is the U.S. planning next?”

And still more important, Ms. Leaf said: “What is it willing to do for its highly vulnerable gulf partners, who are seen by Tehran as partners in the economic warfare being waged by the U.S. on Iran?”

The situation is also complex for American allies in countries where the United States competes for influence with Iran.

In Syria, rebels, activists and exiles who oppose the government of President Bashar al-Assad rejoiced at the news of General Suleimani’s killing, since they held him responsible for backing Mr. al-Assad’s military, which has killed hundreds of thousands of people. But the United States gave up on the effort to remove Mr. al-Assad from power years ago, and Syrian Kurds, an American ally in the battle against the Islamic State, have no idea how long the United States will stick around.

In Iraq, where the United States has invested thousands of lives and billions of dollars, few thanked it publicly for killing General Suleimani, who oversaw the expansion of Iranian influence there, primarily though ties to the country’s Shiites. Even Kurds and Sunnis who may prefer the United States to Iran kept quiet to avoid provoking their Shiite compatriots and their powerful militias.

In Lebanon, American allies were also keeping quiet to avoid provoking pro-Iran forces there. General Suleimani was key to the growth of Hezbollah into a major political party and the country’s strongest military force.

For Israelis, General Suleimani was an archfoe and practically a household name, having surrounded the country with hostile proxy forces armed with tens of thousands of rockets and missiles. His name was associated with a quarter-century of attacks on Jewish and Israeli targets abroad.

But Israeli celebrations were muted over the weekend amid concerns that Israel could end up a target for Iranian retaliation. Israeli officials also wanted to avoid any suggestion of involvement in the Suleimani killing.

Mr. Netanyahu, however, described the dead Iranian commander’s record without mentioning Israel, saying he had “brought about the death of many American citizens and many other innocents in recent decades and at present.”

Amos Yadlin, a former Israeli military intelligence chief and now director of the Institute for National Security Studies in Tel Aviv, was less ambiguous. Writing on Twitter, he said that killing General Suleimani, “with the blood of hundreds of Americans and Israelis + thousands of Sunni Arabs on his hands, was an act of justice.”