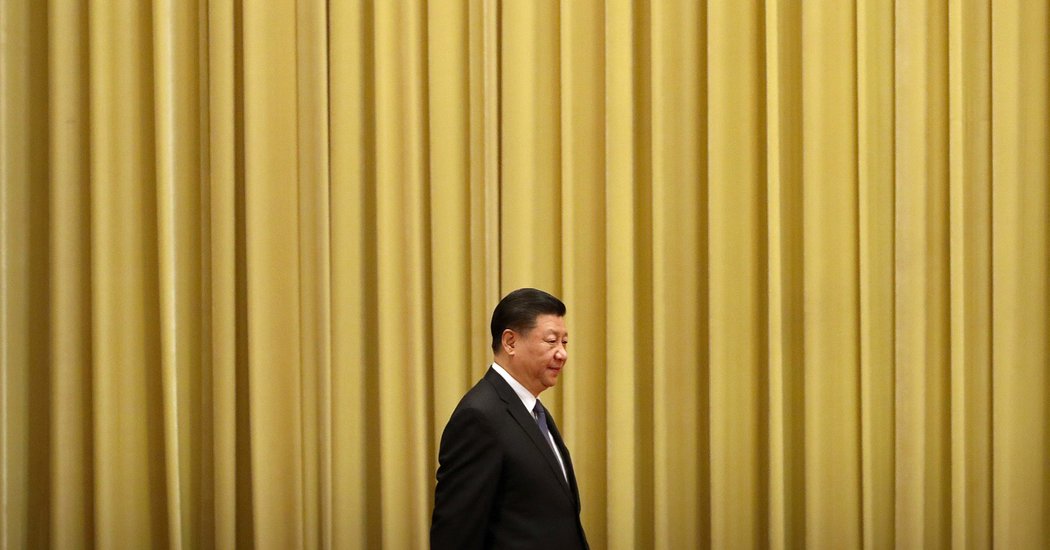 President Trump expressed confidence on Thursday that the United States and China would reach a trade deal but warned that any agreement must include sweeping changes to China’s economic policies or Washington would move ahead with stiffer tariffs on Chinese goods.

In remarks in the Oval Office, Mr. Trump said any agreement he made with President Xi Jinping must go far beyond China simply buying more American products and include an unprecedented opening of its markets to American businesses. He said a final deal would probably be sealed in person during a meeting next month with Mr. Xi at a location that has not been determined.

“I think that probably the final deal will be made will be made between myself and President Xi,” Mr. Trump said.

The United States wants China to commit to buying American goods and services in large quantities to reduce America’s trade deficit, and to agree to make structural changes, including ending its practice of requiring American companies to hand over trade secrets as a condition of doing business there.

Mr. Trump said all issues were being discussed. “We’re certainly talking about theft,” he said. “We’re talking about every aspect of trade with the country.”

The president added that a deal “has a very good chance of happening.”

The world’s two largest economies have been locked in a monthslong standoff that has begun to slow global economic growth and rattled financial markets. Both countries are under growing pressure to reach an accord: American companies with exposure to China have begun warning that the trade war is hurting profits, and the Chinese economy is growing at its slowest pace in years.

Mr. Trump spoke as his top economic advisers were holding the second day of talks in Washington with a delegation of Chinese officials about the framework of a trade pact. If a deal is not reached, the United States will raise tariffs on $200 billion worth of Chinese imports to 25 percent from 10 percent.

[Why the trade talks are unlikely to resolve all issues by the deadline.]

The prospect of another meeting between Mr. Trump and Mr. Xi, who met in Buenos Aires last year, could help soothe investors’ jitters, though equity markets in the United States were mixed in midday trading.

The president is scheduled to meet with Liu He, China’s vice premier, in the Oval Office on Thursday afternoon. Mr. Liu is expected to formally propose a meeting with Mr. Xi at that time.

Mr. Trump could see Mr. Xi in February if he travels to Asia for his next summit meeting with Kim Jong-un of North Korea.

Mr. Trump did appear to offer some wiggle room about extending the deadline while continuing negotiations, but he did not appear willing to budge on raising tariffs.

Trade analysts said a potential meeting between Mr. Trump and Mr. Xi was a strong sign that an agreement could be within reach, as Mr. Trump has shown a greater inclination to close a deal than Robert Lighthizer, his hawkish top trade negotiator.

“Trump’s apparent willingness to meet with Xi raises the odds of a deal that allows the U.S. to claim at least a partial victory and avoid any further escalation of trade tensions,” said Eswar Prasad, the former head of the International Monetary Fund’s China division. “Both sides seem to want to reach a negotiated settlement, and for Trump, the political benefits to striking some sort of deal now probably outweigh the benefits of continuing to maintain a tough and inflexible posture against China.”

He added, “For China, avoiding any escalation of tariffs would constitute a welcome outcome that allows the government to refocus its attention on domestic growth challenges.”

On Monday, Mr. Trump reiterated the types of concessions he wants China to make, including opening its market to American manufacturers, farmers and financial services. “Without this a deal would be unacceptable!” Mr. Trump said in a tweet.

Some Trump administration officials have signaled that the negotiations are narrowing around a smaller initial deal that would stave off additional tariffs, but not roll back the duties on $250 billion worth of Chinese imports that Mr. Trump has already imposed. In exchange, China would follow through with promised purchases of American goods and services and some modest economic changes reforms.

A person familiar with the negotiations said that there were signs of progress on Wednesday, the first day of talks, but that it did not appear that major breakthroughs were imminent on many of the major concessions the United States is seeking. There continues to be division within the Trump administration over what would constitute a sufficient deal, with some advisers such as Mr. Lighthizer urging Mr. Trump to push China harder for major concessions. Other advisers, such as Steven Mnuchin, the Treasury secretary, have warned Mr. Trump that a protracted trade war and additional tariffs would hurt the president’s economic agenda and spook financial markets.

Business groups in the United States have been pleading with the administration to resolve the trade war, which has dented consumer sentiment in both countries and begun to raise prices for Chinese imports. While many American businesses agree that China needs to change its ways, the tit-for-tat tariffs have started to hurt manufacturers and technology companies, including Apple and Caterpillar.

Myron Brilliant, the head of international affairs at the U.S. Chamber of Commerce, who has been briefed on the talks, said China had shown some willingness to make reforms on market access issues and intellectual property. However, China has been highly reluctant to budge on sensitive subjects such as technology transfer and subsidies of state-owned enterprises. For that reason, there are significant gaps between the two sides.

“I would now say we are at halftime of the Super Bowl of trade relations,” Mr. Brilliant said. “There is still work to be done.”

Mr. Trump is also facing political pressure to strike a deal. While Democrats, who now control the House, have urged him to be tough with China, Republicans are encouraging the administration to strike a quick deal that secures big changes from China without destabilizing the United States economy. The president is likely to face criticism from both parties if he strikes an agreement that primarily entails China buying more American products without dramatically opening its markets.

“My hope is that the administration will focus on where the real problem lies, and the real problem is Chinese behavior with respect to intellectual property,” Senator Patrick J. Toomey, Republican of Pennsylvania, said in an interview on Thursday. “It’s the theft. I t’s the forced technology transfer. I think those are the items at the top of the list.”