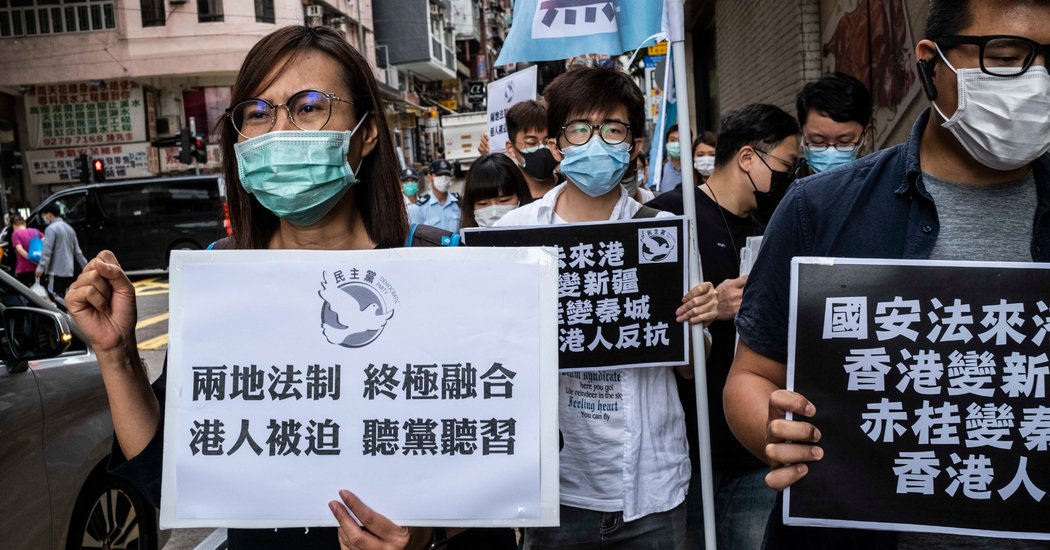 WASHINGTON — Secretary of State Mike Pompeo said on Friday that a broad new security measure proposed by China would amount to a “death knell” for Hong Kong’s political freedoms, as Trump administration officials warned of punishments — possibly including revoking the territory’s special economic and trading status.

A move by the United States to end that special status would subject goods from Hong Kong to the same American tariffs now applied to ones from mainland China.

Other economic and visa restrictions that Washington has imposed on China would also be applied to the semiautonomous territory. That could deal a major blow to Hong Kong’s historic role as a base for multinational companies that command global lanes of trade and commerce from a cluster of skyscrapers on the edge of the South China Sea.

It would also deepen the sense of crisis forming around United States-China relations — now at its worst point in decades — in the wake of the coronavirus pandemic and a 2020 presidential campaign in which China already features prominently.

On another front to pressure Beijing, the Trump administration added more than 30 Chinese companies and other entities on Friday to a blacklist that restricts their access to American technology, saying that they had provided support to the Chinese military, helped Beijing construct a high-tech surveillance system and aided in human rights violations against Muslims.

Bipartisan support is also growing in Congress for sanctions on mainland Chinese officials and entities associated with the proposed Hong Kong security measure, which is likely to be enacted in coming days.

Mr. Pompeo issued his statement hours after Beijing unveiled details of the new security measure that would allow greater crackdowns on political dissent in Hong Kong, becoming the most senior Trump administration official to aggressively react against China’s drastic proposal.

Mr. Trump did not comment, however, leaving his intentions unclear. He has shown limited interest in Hong Kong’s anti-Beijing protest movement and, despite his public anger at China for its management of the coronavirus outbreak in Wuhan, has stopped short of condemning its president, Xi Jinping, with whom he has spent years trying to strike a huge trade deal.

The pointed statement from Mr. Pompeo, among the government’s most aggressive China critics, said that the proposal “would be a death knell for the high degree of autonomy Beijing promised for Hong Kong under the Sino-British joint declaration” and that it “would inevitably impact our assessment of ‘one country, two systems’ and the status of the territory.”

“The United States strongly urges Beijing to reconsider its disastrous proposal,” he added. “We stand with the people of Hong Kong.”

State Department officials have discussed how China’s proposed national security law might affect a potential decision to revoke the preferential trade and economic status that the United States has given Hong Kong since 1997, when Britain handed control of the territory to China. A 1992 law has allowed administrations, for purposes of commerce, to treat Hong Kong under Chinese rule in the same way the American government did when the territory was a British colony.

Under the Hong Kong Human Rights and Democracy Act, which passed last fall with bipartisan support in Congress, the State Department is required to deliver a report each year certifying the semiautonomous status of Hong Kong — and thus endorsing the continuation of the preferential treatment. Mr. Trump reluctantly signed the bill into law in November, at a time when he was trying not to anger Mr. Xi because he was aiming to secure a trade deal. China’s Foreign Ministry called that measure “a naked interference in China’s internal affairs.”

Mr. Pompeo said this month he would delay issuing a report to Congress in order to measure actions that Beijing has taken on Hong Kong. That was intended to signal to Chinese leaders to ease their hard-line policies on Hong Kong, but it has not worked so far.

The State Department spokeswoman, Morgan Ortagus, said in a statement Thursday that the department was delaying the report to “allow us to account for any additional actions” that “would further undermine Hong Kong’s high degree of autonomy.”

The message was clear: American officials are tracking the proposed law, and American policy toward Hong Kong is in the balance.

On Friday, a spokesman for the Chinese Foreign Ministry, Zhao Lijian, accused the United States of adopting a “Cold War mentality” and said it should not interfere in China’s internal affairs. “No one can stop China from growing stronger,” he added, according to the Chinese newspaper Global Times.

In the Trump administration, China policy debates have generally been divided between economic officials wary of conflict that could rattle markets or disrupt trade talks, and national security officials determined to confront Beijing’s growing strategic power. That made the harsh words of Mr. Hassett, a senior economic aide, all the more notable.

“China’s move in Hong Kong is going to be very, very bad for the Chinese economy and the Hong Kong economy,” Mr. Hassett added in remarks to reporters at the White House.

Concerns among Trump administration national security officials over Hong Kong escalated last year, when pro-democracy protesters took to the streets beginning in the summer and were confronted at every turn by the police. In Beijing, hard-line Chinese officials determined that the police were not using enough force to suppress the protests.

“This latest move is yet another case of how the Chinese leadership’s preoccupation with domestic national security considerations override its considerations of the international repercussions of such a move,” said Dali L. Yang, a political scientist at the University of Chicago.

In considering whether to revoke the territory’s preferential status, Trump administration officials must weigh the damage it would do to both mainland China and Hong Kong itself. China relies on Hong Kong, whose currency is pegged to the dollar, as the first financial stop in trade with the rest of the world. Chinese financial institutions and state-owned companies hold vast assets there. And many Chinese companies list on the Hong Kong Stock Exchange.

Some American officials have asked whether a status change would ultimately harm Hong Kong, and the many corporations based there, while failing to get China to back off.

The preferential trade status of Hong Kong became even more important for American companies under the trade war begun by Mr. Trump in 2018. Some companies that wanted to avoid tariffs imposed by the Trump administration arranged for goods from China to be sold first to Hong Kong trading companies before going to the United States, allowing them to avoid some of the burden of tariffs.

The withdrawal of Hong Kong’s special status would make all exports from the territory subject to the tariffs Mr. Trump has slapped on Chinese products, including goods that transit through the territory. Investments routed through Hong Kong are also likely to be subject to greater scrutiny for national security risks, said Eswar Prasad, a professor of trade policy at Cornell University.

Even if the Trump administration takes no action, Congress is likely to: A bipartisan Senate measure introduced on Thursday would penalize Chinese officials, or entities like police units, involved in the security measure, as well as banks that conduct “significant transactions” with them.

In an interview, Senator Chris Van Hollen, Democrat of Maryland, said that he and his co-sponsor, Senator Pat Toomey, Republican of Pennsylvania, would “urge the Senate to move very quickly,” and predicted the measure would win a veto-proof majority in the Senate and House.

On Friday, the Commerce Department added 24 organizations, including Qihoo 360 Technology Company, FiberHome Technologies Group and Beijing Cloudmind Technology, to its “entity list” for activities that run counter to America’s national security interests, including supporting the Chinese military. An additional nine entities were added for aiding human rights violations in the Xinjiang region, home to members of the Uighur minority who have been targeted by Chinese officials. The designation will bar American companies from selling them certain high-tech items without first obtaining a special license.