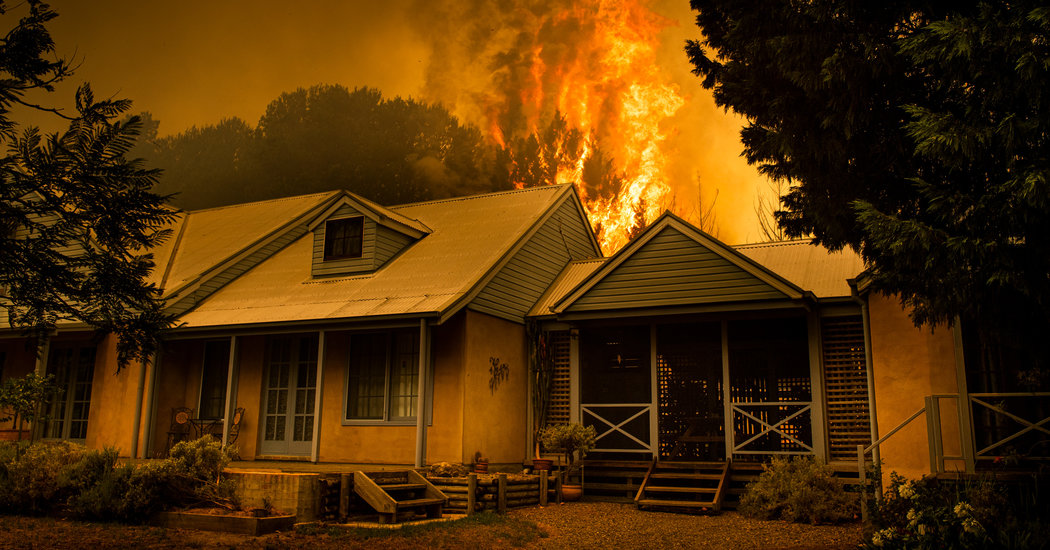 SYDNEY, Australia — As the fire stalked the east coast of Australia on Tuesday, the daytime sky turned inky black, then blood red. Emergency sirens wailed, followed by the thunder of gas explosions. Thousands of residents fled their homes and huddled near the shore. There was nowhere else to go.

Apocalyptic scenes like these in Mallacoota, a vacation destination between Sydney and Melbourne, came on the last day of the warmest decade on record in Australia. The country is in the grip of a devastating fire season, with months of summer still to go, as record-breaking temperatures, strong winds and prolonged drought have ignited huge blazes across the country.

The government prepared to deploy navy vessels and military helicopters to help fight the fires and evacuate people.

The devastation is immense. In the state of New South Wales, which includes Sydney, more than 900 homes have been destroyed and nine million acres have burned since November. About 100 fires are currently raging in the state, with about three dozen more across the border in Victoria. At least 11 people have died.

Australia is normally hot and dry in summer, but climate change, which brings more frequent and longer periods of extreme heat, worsens these conditions and makes vegetation drier and more likely to burn. The country recently concluded its driest spring on record. That was followed in mid-December by the hottest day on record, with average highs across the country of 41.9 degrees Celsius (107.4 degrees Fahrenheit).

Polls show a large majority of Australians view climate change as an urgent threat and want stronger government action to combat it. The catastrophic fire conditions have put an intense focus on the Australian government’s failure to reduce emissions of carbon dioxide, which traps heat when released into the atmosphere and contributes to global warming.

Prime Minister Scott Morrison, a conservative, has made it clear that Australia’s economic prosperity comes first. Even as his country burned, he has said repeatedly that it is not the time to discuss climate policy.

As Australia has seen a surge of climate activism in recent months, Mr. Morrison has gone so far as to suggest that the government should outlaw efforts by environmental groups to pressure businesses with rallies and boycotts. Other members of Mr. Morrison’s government have answered calls for action with insults; the deputy prime minister called people who care about global warming “raving inner-city lunatics.”

More recently, Mr. Morrison has been in damage control mode over his decision to vacation in Hawaii even as the authorities raised emergency fire warnings across the country. He cut the trip short after two volunteer firefighters died.

Those deaths raised new questions about Australia’s reliance on an overwhelmingly volunteer firefighting force. The physical and emotional toll on the thousands of unpaid firefighters has been mounting as some have worked shifts of 12 hours or more. After initially resisting calls to compensate firefighters, Mr. Morrison announced limited daily payments.

The fires have been a constant presence in Australia for weeks, but the eerie images that emerged on social media on Tuesday cast them in a new light, and seemed to be a harbinger for the new decade that the country rang in hours later.

In Mallacoota, residents in boats shared footage of themselves wearing masks and life vests as they waited under the blazing red sky. Others opted to stay and defend homes, likening burning trees to “exploding infernos” and describing the roar of the blazes.

In Batemans Bay, four hours north, residents sat on folding chairs along the beach, life rafts at the ready, as a fire encircled the town and burned homes. To the south, in Cobargo, a father and son died in a blaze as they tried to protect the family home.

With several blazes burning out of control, thousands were stranded in evacuation centers in other towns along the coast as firefighters told people to stay put. Tens of thousands of people were without power, the Australian military was authorized to deploy aircraft and naval vessels, and the government requested firefighting help from Canada and the United States.

In Sydney, where heavy smoke from fires has obscured the sun many days this summer, officials rejected calls to cancel the city’s signature New Year’s Eve fireworks display after the Rural Fire Service in New South Wales approved the celebration. One blaze reached the western part of Sydney, threatening homes.

The fires have been so fierce that they have created their own weather systems. On Monday night, a volunteer firefighter died after a phenomenon called a fire tornado — turbulence caused by extreme rising heat — in New South Wales caused a 10-ton fire truck to roll over.

The firefighter, Samuel McPaul, 28, was expected to become a father in May. He was the third volunteer firefighter to die this fire season; the other two, who also died in an accident involving a fire truck, were fathers of young children.

In Mallacoota, just over the border in the state of Victoria, residents had spent Monday night preparing to evacuate. As the fire approached, some gathered at a community center, while others climbed into boats in bodies of water.

“I’ve never seen anything like it,” said one man filming his escape on a boat.

Ida Dempsey of Melbourne, who spends Christmas every year in the area with her family, also took refuge on the water.

“We couldn’t see a thing. It was pitch black,” Ms. Dempsey said. “We had face masks; the smoke was very bad.”

She commended fire officials for keeping people calm. “If we didn’t have a plan, I would have panicked a bit more,” she said.

In Batemans Bay, said James Findlay, who grew up there, the fire came so quickly that there was no hope to save his family home.

His parents, Mr. Findlay said, were in shock.

“If this isn’t some kind of a sign that more should be done, then I don’t know what is.”