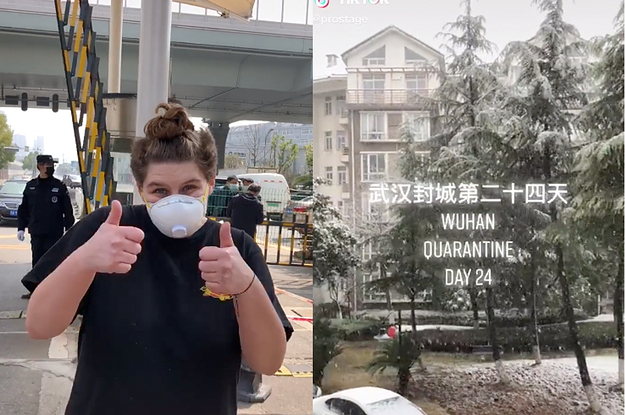 Megan Monroe went to Wuhan 90 days ago to work as an English teacher. The 21-year-old American has spent the last half of that period in quarantine for COVID-19.

Almost every day, Monroe (who uses the pronoun “they”) has posted a video about their trip to their 40,000 followers on TikTok, providing an unfiltered view of what life is like in lockdown in Wuhan.

“I mostly just want people to know it’s not scary,” Monroe wrote to BuzzFeed News. “I’m a real person and I’m living here and I’m just continuing on with my life.”

Some of the videos are so normal they could be set anywhere. Monroe is shown cooking, volunteering, opening parcels from family, learning tongue twisters and enjoying sunshine.

But the videos also depict the surreal — often grim — reality of being locked down in a city at the epicentre of the deadly virus outbreak.

In one, they are passed medicine through a fence by a pharmacist from outside the quarantine area. In another, Monroe recounts abandoning a grocery trip after discovering their apartment had been padlocked shut.

Monroe and their supervisor have been producing the TikToks together: Monroe appears in the videos, the supervisor shoots, edits and uploads them to the account @prostage.

The pair has found a big audience on TikTok. The account’s videos have been liked more than 360,000 times.

A community has sprouted around the account, with followers sending best wishes and asking questions about what life is like in Wuhan.

“People have heard rumours about … the clouds being black from the government cremating all the secret deaths, and just a bunch of crap. I told them to follow my TikTok if they really wanted to know [what it’s like].”

Megan has even had to dispel rumours that they are faking being in Wuhan. “Yes, I’m actually in China holding this fish,” Monroe says in one TikTok.

Despite having an abundance of reasons not to be, Monroe is unflinchingly chipper and warm in the videos. They are not scared — they don’t have COV-19 and aren’t too worried about catching it — but they are bored and looking forward to going home.

“The US had flights going back [earlier], but they’re charging $USD1,100 to fly back home and I just can’t afford that. Other countries were flying their citizens home for free. Also, my mum didn’t want me to risk being stuck on the plane and have to be stuck in quarantine back in the US,” they said.

For now, Monroe is trying to make the best of a bad situation.

“This seems a bit silly but right before I left my parents and I celebrated an early Christmas, and they gave me a bracelet that says ‘Life is tough but I am tougher’. I know that I’m lucky, and that everything happens for a reason. I’m exactly where I need to be right now,” they wrote.