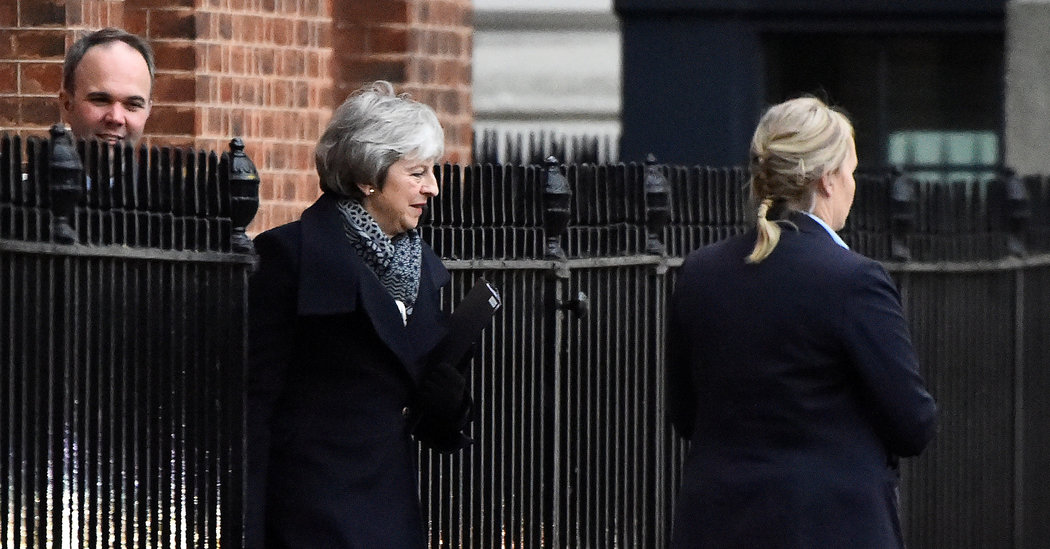 Ahead of a vote on her Brexit plan that could go down to a humiliating defeat in Parliament, Prime Minister Theresa May of Britain was fighting on Monday less to avert the loss than to limit its scale.

In that vein, Mrs. May enlisted fresh promises from Europe’s most senior officials through an exchange of letters and warned supporters of Britain’s withdrawal from the European Union that the whole project would be threatened if her deal was voted down as expected.

Neither tactic looked likely to change the overall outcome, but if Mrs. May can curb the magnitude of any defeat to manageable proportions, she could avert an immediate political meltdown. That, given the precarious state of events, would be a victory of sorts.

Speaking in a ceramics factory in Stoke-on-Trent, an area that voted heavily to leave the European Union, Mrs. May warned that Britain’s failure to withdraw from the bloc would risk “a subversion of the democratic process” and do “catastrophic harm” to faith in politics.

Though she carefully refused to rule it out, Mrs. May insisted that she has no intention of seeking to extend the negotiating deadline of March 29 laid down under Article 50 of the European Union’s treaty.

Even in defeat, Mrs. May wants to show that, in a Parliament paralyzed over Brexit, her plan still has more support than likely alternatives, like negotiating closer ties to the European Union, rethinking Brexit altogether through a second referendum or leaving without any deal at all.

The stakes are high because a crushing defeat in the vote on Tuesday could destroy Mrs. May’s strategy of keeping her plan alive in the hope that, as other options falter, lawmakers will support hers out of desperation.

A severe loss, meaning by more than 100 votes in Parliament, would reduce prospects of Britain’s winning further concessions from European Union officials. They are loath to give ground unless it seems like Mrs. May needs only a small push to get over the finish line. A loss of historic proportions might make her position untenable, forcing her resignation.

Lawmakers are preparing for a moment of parliamentary high drama on Tuesday. In one prominent example, Tulip Siddiq, a member of the opposition Labour Party, told the Evening Standard newspaper that she had ignored medical advice and postponed her cesarean section by two days in order to vote in person.

The last time a government was defeated by more than 100 votes is thought to have been in October 1924, when, academics say, a minority government led by James Ramsay MacDonald went down to a defeat of 166 over its abandonment of the prosecution of a left-wing newspaper, prompting a general election.

Mrs. May faces a rebellion from many of her own lawmakers who are angry about the so-called “backstop” plan to keep the Irish border open for the free flow of goods after Britain leaves the bloc. Brexiteers fear that this could keep Britain tied to the European Union indefinitely, while the Democratic Unionist Party from Northern Ireland, which props up Mrs. May’s government, is petrified about its part of the country being separated economically from the rest of the United Kingdom.

In a letter published on Monday, Jean-Claude Juncker and Donald Tusk, presidents of the European Commission and the European Council, emphasized that they did not want the backstop to come into force and hoped it could be averted by agreement on a trade deal that removes the need for border checks.

If it did become operable, the European Union would use “its best endeavors” to negotiate an agreement to replace it, “so that the backstop would only be in place for as long as strictly necessary.”

That did little to placate Nigel Dodds, the deputy leader of the D.U.P., who wrote on Twitter that “rather than reassure us, the Tusk and Juncker letter bolsters our concerns.”

Mrs. May seems to have calculated that, for the time being, her best hope is to cajole some hard-line Conservative Party Brexiteers into supporting her, even if they hate her plan, for fear of something worse. Her hand has been strengthened by machinations in Parliament in recent days, as lawmakers have tried to wrest control of the Brexit process, to inconclusive results, from a government that has no clear majority.

That wrangling has raised the possibility of a much “softer” Brexit, with closer ties to the European Union than Mrs. May wants, or a second referendum that might stop Brexit completely.

Mrs. May has also been trying to persuade lawmakers to side with her for fear of the disorderly Brexit that might arise on March 29 if, by then, there is not agreement. Prospects of that outcome have lessened lately because of the assertiveness of Parliament where a clear majority of lawmakers is determined to avoid a “no-deal” Brexit.

There was some bad news on Monday for Mrs. May with the resignation from her government of Gareth Johnson, an assistant whip, so that he would be free to vote against her Brexit plan.

But there was some movement in the other direction, too. One opposition Labour lawmaker, Kevin Barron, who represents a constituency that voted heavily for Leave, told The Times of London that his reservations over the plan were “far outweighed” by the risk of no deal, and that any attempt to reverse Brexit would be a “betrayal.”

A small group of Conservative Brexit supporters, including Andrew Murrison, Geoffrey Clifton-Brown, Caroline Johnson and Edward Leigh, are also now expected to support Mrs. May. They are hardly the most enthusiastic cheerleaders, however.

Mr. Clifton-Brown told the BBC that he believed Mrs. May was headed for defeat but was “fearful that a coalition in the House of Commons will somehow find a way of either extending Article 50 or, worse still, preventing us leaving altogether.”

Asked about the merits of Mrs. May’s plan, he replied, “Well, basically I still think it’s a thoroughly bad deal.”