The Saturday Profile: Her Visit to a Men-Only Temple Went Smoothly. Then the Riots Started.

KOCHI, India — One morning this month, Bindu Ammini stood at the base of a steep, forested trail in southern India and looked up: She was a three-mile hike away from making history.

Two hours later, at 3:45 a.m., Ms. Ammini and a friend became the first women to enter the Sabarimala Temple, a centuries-old Hindu shrine, after India’s Supreme Court struck down a longstanding rule preventing women of menstruating age from visiting.

In the wake of that ruling, a dozen women tried in October to climb a slippery path leading to the temple. None of them made it, as men screamed in their faces and hurled coconuts.

Video of Ms. Ammini’s journey on Jan. 2 shows two women in long black gowns striding through a gilded archway. They maneuver past mostly placid men. “Our visit has been very smooth,” Ms. Ammini, 40, says to the camera.

A few hours later, the rest of India woke up. Pandemonium followed.

Protesters in the state of Kerala, where the shrine is, threw crude bombs at the police. Over 3,000 people were arrested. At least one person was killed. Dozens more were injured.

Within hours of the women’s trip, a priest had shut down the Sabarimala Temple to sprinkle water for a “purification ritual,” evidence to some that the ban was rooted in a belief that menstruating women were dirty.

For days this month, Ms. Ammini has been on the move: bouncing from one safe house to the next, separated from her husband and daughter and weighing the risks of returning home.

Still, in an interview near the city of Kochi, she said the trip had been worth it. A lower-caste woman who had grown up in grinding poverty, Ms. Ammini emphasized that her entering the temple should not fall under the category of activism. All she was doing, she said, was exercising a constitutional right to equality.

“We were not trying to start trouble,” she said. “Our goal was only to visit the temple. For the next generation of women, this is motivation.”

Every year, millions of people wait for hours to climb the 18 gold-plated steps leading to the Sabarimala Temple, one of Hinduism’s holiest shrines. For centuries, however, pilgrims say they have observed a de facto bar against women between the ages of 10 and 50, thinking that to allow menstruating women inside would disturb the temple’s celibate deity, Lord Ayyappa. 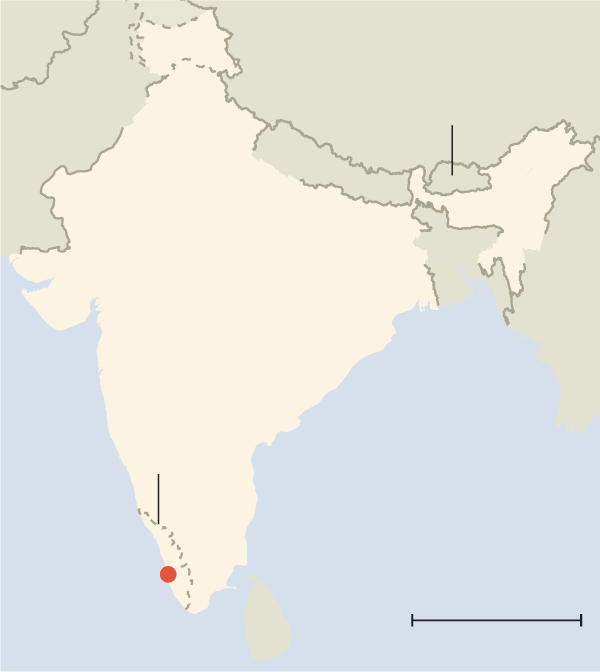 Though the historical record suggests that women had sporadically visited the temple for years, Kerala’s High Court made the tradition a law in 1991, which was subsequently overturned by the Supreme Court.

In the face of the ensuing protests, Kerala’s governing Communist Party of India offered protection to women who wished to visit the temple. But the police struggled to contain crowds blocking the trail. Rosters of the women who had tried to visit the temple spread on social media. They were marked as “Hindu haters,” Maoists, atheists, Muslims and “Xtians.”

Ms. Ammini said she was unsurprised; many of the protesters were Hindu nationalists. Fallout from the Supreme Court’s ruling had emboldened far-right groups to promote anti-women “Brahmanical interests,” she said. These were issues she had thought about for most of her life.

Born to illiterate parents in Kerala, Ms. Ammini described her childhood as perpetually unstable. Tired of beatings by her husband, Ms. Ammini’s mother fled their small village with her young children, taking menial jobs in hotels and on farms.

Growing up, Ms. Ammini was always a bit of a rebel, bending rules that had restricted the lives of so many Indian women. She fell for an upper caste boy. At 17, she joined a feminist group.

The risks of speaking out were underlined during that period. Shortly after a local girl was raped and murdered, Ms. Ammini said she and two other women marched into the office of a senior police official and called for the arrest of the men responsible for the crime.

“They were siding with the criminals,” she said.

Instead, a few days later, the police arrested Ms. Ammini, she said, accusing her of attacking a man and knocking out one of his teeth. After a night locked in the police station, she escaped by jumping from the building’s first floor.

(Ms. Ammini said she was not convicted in the “fake case.”)

The first in her family to attend college, Ms. Ammini gravitated to leftist circles at the University of Calicut and joined the Communist Party of India. She also met her future husband, K.V. Hariharan, a party member, bonding with him over books by Pablo Neruda and humanist writers.

“Even his love letters were serious,” Ms. Ammini said.

With little money, Ms. Ammini wore a $2 sari to her wedding in a building called “Freedom Fighters Hall.” A few years later, she gave birth to a daughter, B.H. Olga, naming her for Olga Benário Prestes, a German Communist who was killed in a Nazi gas chamber.

In her 20s and early 30s, Ms. Ammini earned a law degree and climbed up the ranks of the Communist Party of India, weathering splits and realignments. She was often one of the few women at meetings, an observation that pressed on her. Fed up with the direction of the party, she left politics eight years ago and settled into a position teaching law at Kannur University in Kerala.

Then news of the Supreme Court’s verdict captured her attention.

In December, Ms. Ammini joined a Facebook group for women who were interested in visiting the temple. She connected with Kanakadurga, 39, a government employee who came from a Hindu family that had opposed the Supreme Court’s verdict. The women teamed up. Some 4,000 women had registered similar intentions with the police.

On Dec. 24, they made a first attempt to reach the temple, but retreated after a mob attacked police officers who were escorting the women. Officials encouraged them to forget it and return home, but Ms. Ammini refused.

“I decided I would start a hunger strike,” she said. The police backed off.

On Jan. 1, inspired by news that several million women had joined hands across Kerala to form a “women’s wall” for equality, they decided to try again, recruiting a few police officers to accompany them.

At 1:26 a.m. Ms. Ammini and Ms. Kanakadurga, who uses one name, started the climb toward the temple. Near the mouth of the complex, the women beelined for an entrance for V.I.P.s, seeing that the main door was too clogged with people.

But inside, nobody confronted the women, Ms. Ammini said. A pilgrim offered her water. They capped off a short visit by praying to the deity. “The violent mob was out of that place,” she said. “No devotee raised any voice against our journey to the shrine.”

On the way down, Ms. Ammini said she stopped cooperating with the police, who tried to keep her head covered with a shawl. The women lingered at stalls to buy rice and lemon juice.

In the days after the visit, other women tried unsuccessfully to visit the shrine. This week, two women in men’s clothing were turned back. Another woman angrily claimed that she was prevented from going to the temple even after telling the police that she had no uterus. Ms. Ammini burst out laughing when she heard this.

“We definitely have uteruses,” she said.

New challenges await the women. The Supreme Court plans to consider review petitions, though lawyers do not expect a reversal of the verdict. Earlier this week, after the women left a safe house, Ms. Kanakadurga’s mother-in-law beat her so badly with a piece of wood, she said, that she was hospitalized.

Ms. Ammini said she was realistic about her safety, fretting about a recent ominous “silence” in Kerala. But the way forward — “to serve the society, work with Dalits, women, for blacks” — had never been plainer or more urgent, she said.

“They may attack me, they may kill me, but I feel no fear,” she said. “I am struggling for existence.”