The Rise of the Robot Reporter 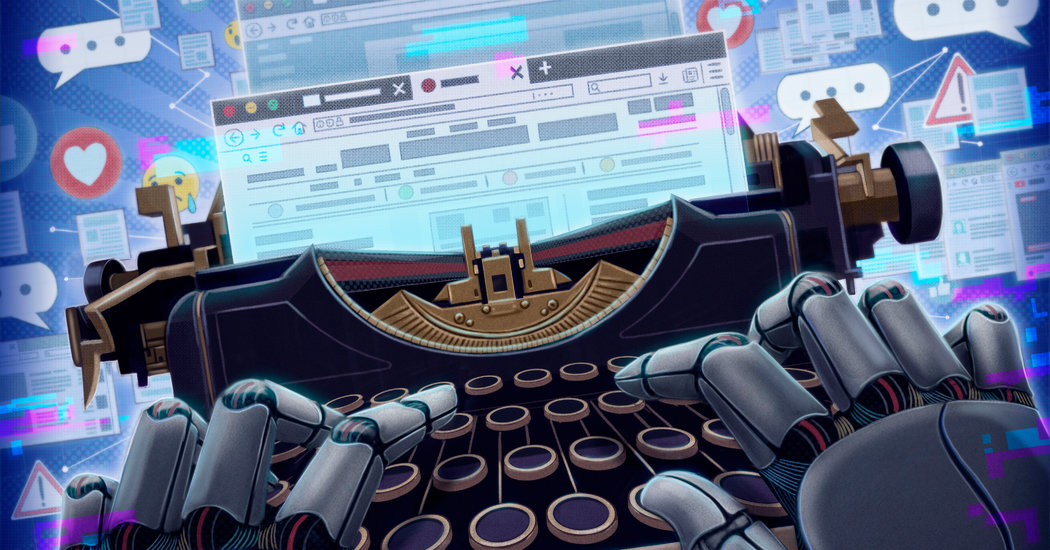 As reporters and editors find themselves the victims of layoffs at digital publishers and traditional newspaper chains alike, journalism generated by machine is on the rise.

Roughly a third of the content published by Bloomberg News uses some form of automated technology. The system used by the company, Cyborg, is able to assist reporters in churning out thousands of articles on company earnings reports each quarter.

The program can dissect a financial report the moment it appears and spit out an immediate news story that includes the most pertinent facts and figures. And unlike business reporters, who find working on that kind of thing a snooze, it does so without complaint.

Untiring and accurate, Cyborg helps Bloomberg in its race against Reuters, its main rival in the field of quick-twitch business financial journalism, as well as giving it a fighting chance against a more recent player in the information race, hedge funds, which use artificial intelligence to serve their clients fresh facts.

“The financial markets are ahead of others in this,” said John Micklethwait, the editor in chief of Bloomberg.

In addition to covering company earnings for Bloomberg, robot reporters have been prolific producers of articles on minor league baseball for The Associated Press, high school football for The Washington Post and earthquakes for The Los Angeles Times.

Examples of machine-generated articles from The Associated Press:

Last week, The Guardian’s Australia edition published its first machine-assisted article, an account of annual political donations to the country’s political parties. And Forbes recently announced that it was testing a tool called Bertie to provide reporters with rough drafts and story templates.

As the use of artificial intelligence has become a part of the industry’s toolbox, journalism executives say it is not a threat to human employees. Rather, the idea is to allow journalists to spend more time on substantive work.

“The work of journalism is creative, it’s about curiosity, it’s about storytelling, it’s about digging and holding governments accountable, it’s critical thinking, it’s judgment — and that is where we want our journalists spending their energy,” said Lisa Gibbs, the director of news partnerships for The A.P.

The A.P. was an early adopter when it struck a deal in 2014 with Automated Insights, a technology company specializing in language generation software that produces billions of machine-generated stories a year.

In addition to leaning on the software to generate minor league and college game stories, The A.P., like Bloomberg, has used it to beef up its coverage of company earnings reports. Since joining forces with Automated Insights, The A.P. has gone from producing 300 articles on earnings reports per quarter to 3,700.

The Post has an in-house robot reporter called Heliograf, which demonstrated its usefulness with its coverage of the 2016 Summer Olympic Games and the 2016 elections. Last year, thanks to Heliograf, The Post won in the category of Excellence in Use of Bots at the annual Global Biggies Awards, which recognize accomplishments in the use of big data and artificial intelligence. (As if to make journalists jittery, the Biggies ceremony took place at Columbia University’s Pulitzer Hall.)

Jeremy Gilbert, the director of strategic initiatives at The Post, said the company also used A.I. to promote articles with a local orientation in topics like political races to readers in specific regions — a practice known as geo-targeting.

“When you start to talk about mass media, with national or international reach, you run the risk of losing the interest of readers who are interested in stories on their smaller communities,” Mr. Gilbert said. “So we asked, ‘How can we scale our expertise?’”

The A.P., The Post and Bloomberg have also set up internal alerts to signal anomalous bits of data. Reporters who see the alert can then determine if there is a bigger story to be written by a human being. During the Olympics, for instance, The Post set up alerts on Slack, the workplace messaging system, to inform editors if a result was 10 percent above or below an Olympic world record.

A.I. journalism is not as simple as a shiny robot banging out copy. A lot of work goes into the front end, with editors and writers meticulously crafting several versions of a story, complete with text for different outcomes. Once the data is in — for a weather event, a baseball game or an earnings report — the system can create an article.

But machine-generated stories are not infallible. For an earnings report article, for instance, software systems may meet their match in companies that cleverly choose figures in an effort to garner a more favorable portrayal than the numbers warrant. At Bloomberg, reporters and editors try to prepare Cyborg so that it will not be spun by such tactics.

A.I. in newsrooms may also go beyond the production of rote articles.

“I hope we’ll see A.I. tools become a productivity tool in the practice of reporting and finding clues,” said Hilary Mason, the general manager for machine learning at Cloudera, a data management software company. “When you do data analysis, you can see anomalies and patterns using A.I. And a human journalist is the right person to understand and figure out.”

The Wall Street Journal and Dow Jones are experimenting with the technology to help with various tasks, including the transcription of interviews or helping journalists identify “deep fakes,” the convincingly fabricated images generated through A.I.

“Maybe a few years ago A.I. was this new shiny technology used by high tech companies, but now it’s actually becoming a necessity,” said Francesco Marconi, the head of research and development at The Journal. “I think a lot of the tools in journalism will soon by powered by artificial intelligence.”

The New York Times said it had no plans for machine-generated news articles, but the company has experimented with using A.I. to personalize newsletters, help with comment moderation and identify images as it digitizes its archive.

Previous technological advances have rendered moot a number of jobs that were once essential to the journalism industry, such as Linotype operator. But reporters and editors have not yet been tempted to smash the programs now taking care of some of the busy work that once fell to them.

“When you look at the ways things are laid out and printed and produced and distributed, a lot of those functions have been replaced with technology,” said Nastaran Mohit, the organizing director for the News Guild of New York. She added that she did not consider A.I. a threat to newsroom workers, while also noting that the guild monitors emerging technologies to make sure that hypothesis holds true.

Mr. Marconi of The Journal agreed, likening the addition of A.I. in newsrooms to the introduction of the telephone. “It gives you more access, and you get more information quicker,” he said. “It’s a new field, but technology changes. Today it’s A.I., tomorrow it’s blockchain, and in 10 years it will be something else. What does not change is the journalistic standard.”

Marc Zionts, the chief executive of Automated Insights, said that machines were a long way from being able to replace flesh-and-blood reporters and editors. He added that his daughter was a journalist in South Dakota — and although he had not advised her to leave her job, he had told her to get acquainted with the latest technology.

“If you are a non-learning, non-adaptive person — I don’t care what business you’re in — you will have a challenging career,” Mr. Zionts said.

For Patch, a nationwide news organization devoted to local news, A.I. provides an assist to its 110 staff reporters and numerous freelancers who cover about 800 communities, especially in their coverage of the weather. In a given week, more than 3,000 posts on Patch — 5 to 10 percent of its output — are machine-generated, said the company’s chief executive, Warren St. John.

In addition to giving reporters more time to pursue their interests, machine journalism comes with an added benefit for editors.

“One thing I’ve noticed,” Mr. St. John said, “is that our A.I.-written articles have zero typos.”