Tech Fix: It’s Time to Use Your Imagination With Bluetooth Trackers. We Did. 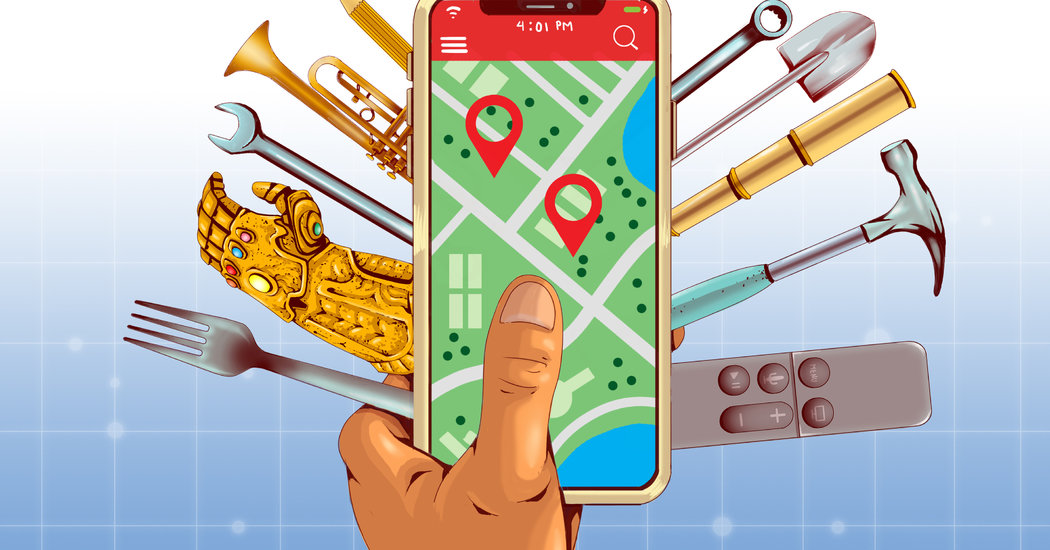 This week, I’m asking readers to engage in an admittedly odd exercise: to use our imaginations with Bluetooth trackers.

Bluetooth trackers are those tiny tags that help you find lost items. They attach to your house keys or wallet so that if those things are misplaced, you open a smartphone app and tap a button to make the tracker play an alarm. That sound lets you find the item more easily.

But that’s not all these trackers can do. You can squeeze a lot more value out of the tags by thinking beyond the items that live in your pockets.

I engaged in this exercise over the past two weeks. Bluetooth trackers, which are generally priced between $10 and $35, come in many shapes and sizes from dozens of brands, including Tile, Chipolo and Adero. I tested Tile, the Bluetooth tracker recommended by Wirecutter, a New York Times company that reviews products, in various focal points of my life: the car, my luggage, the living room and even my dog.

It turned out the tags were useful in far more situations than lost items. Who would have guessed that trackers would make retrieving my checked luggage at the airport slightly less miserable, or help an absent-minded driver find his car? More on these below.

There’s a bigger point to this exercise, of course. Many tech gizmos seem to be designed for one specific use. But with a little thought and inspiration, they can be helpful in more situations. Try it!

Searching for my Apple TV remote

Anybody who owns an Apple TV is familiar with its frustratingly slim remote control. While thin and elegant, the remote control vanishes between couch cushions on a regular basis. I have misplaced two Apple TV remotes and still haven’t found them — they are probably living somewhere deep in the crevices of my couch.

So when I bought my third remote, I also purchased an Apple remote loop, which is basically a bracelet that you plug into the remote control’s power port. Then I tied a Tile tracker to the loop.

This was an absolute success

Whenever I lose the remote, I now open the Tile app on my phone and press a button to make the tracker play a sound. Then I know exactly where to look. The only downside is that with a tracker tied to it, the Apple TV remote is bulkier and somewhat reminiscent of a bathroom key at a gas station.

The most annoying part about checking your luggage is waiting for it to arrive at baggage claim. The second most annoying part is searching for your bag amid dozens of others that look just like it. So when I traveled recently, I slipped a Tile into my luggage tag to see if it would make my bag easier to find.

When my luggage finally showed up, the Tile app on my phone showed that the tracker was nearby. I pressed a button to play an alarm from the Tile; it was just loud enough for me to spot my luggage as it arrived.

In a crowded parking lot, my silver Toyota Prius is unremarkable and can be difficult to find. So when I parked in a large lot recently, I stuck a tracker into the glove compartment.

It worked (though there are better ways to find a car)

When walking through the parking lot, I opened the Tile app, which showed the last known location of the tracker on a map. I followed the map, and as I got closer to the location that it indicated, the app signaled the tracker was nearby.

This was helpful, but there are probably better methods for keeping track of where you parked. Some mapping apps, like Google Maps, can automatically detect where you parked and make a note of it on a map. But since I often drive without using a maps app, leaving a tracker in my glove compartment was a decent backup solution.

Plenty of pet owners are paranoid about their dogs or cats running away. I was curious to see how effective a Bluetooth tracker would be at tracking down a fast-moving animal.

I recently attached a Tile to the collar of my Labrador retriever, Mochi, and asked my fiancée to take the dog somewhere so I could try finding her.

I opened the Tile app, selected the tracker attached to Mochi and tapped “notify when found.” Then I received an alert indicating that Mochi was last seen a few miles away in a dog park on the side of a mountain.

Here’s how that worked: My Tile is part of a network of Tile users. That means when other people with the Tile app get within range of the tracker on Mochi, their app automatically lets Tile know the location. That information is then forwarded to my Tile app.

That may sound like a privacy disaster, but Tile said the network was anonymized, meaning others don’t actually see my Tiles and I don’t see theirs; this is all running in the background of people’s Tile apps. With Mochi, another Tile user was probably near her, so my Tile app informed me of where my tracker was last seen.

The problem was that Mochi’s last known location remained static on the map, probably because she did not pass by more Tile users. I went to the indicated location in the dog park, but she was nowhere in sight. (It is a big dog park.)

Luckily, I eventually ran into Mochi there. But if this were a loose animal with true intentions of running away, lacking a real-time update on the tracker’s location would make it very difficult to find the pet.

Representatives of Tile noted that the device was not designed for tracking pets in real time. There are pet products made for this purpose, like trackers that rely on GPS to pull a signal from a satellite and provide a precise, up-to-date location. Those tend to be expensive.

One final note: These situations were pertinent to my life, but there are plenty of other applications for these trackers for people with different lifestyles.

Busy parents may benefit from adding trackers to the jackets of their young children, for example. People with medical conditions may want to attach trackers to devices they need to find quickly, like inhalers. In other words, with a little bit of inventiveness, the things that are truly important to you won’t become lost.