Taliban Wipe Out an Afghan Army Company While Talking Peace With the U.S. 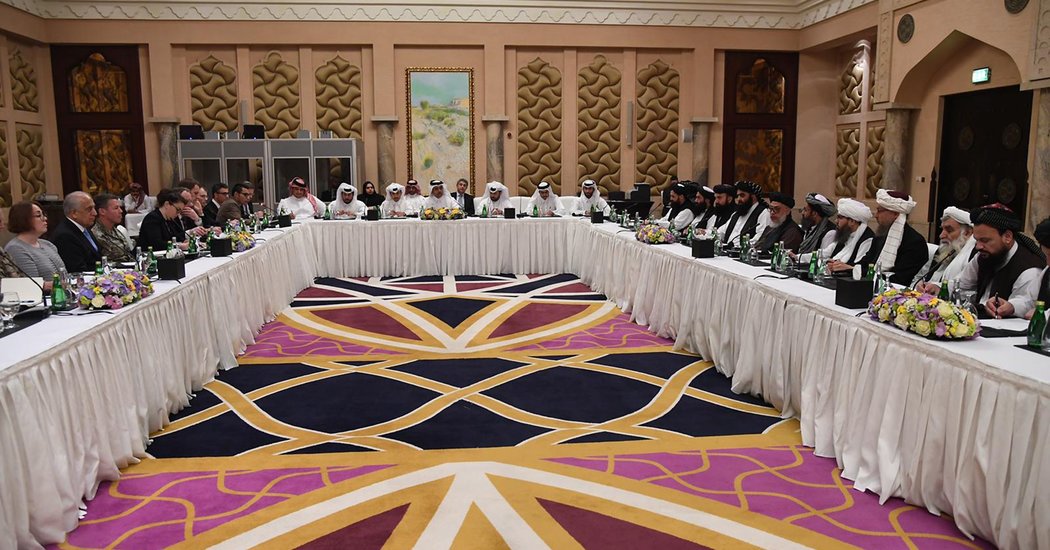 HERAT, Afghanistan — Taliban fighters killed or captured an entire Afghan National Army company of more than 50 soldiers on Monday, Afghan officials said, the latest in a series of major attacks by the militant group even as it pursues a peace deal with the United States.

The attack, in which the Taliban were reported to have killed 16 soldiers and taken 40 prisoner, took place in northwestern Badghis Province, close to the country’s western border with Turkmenistan. It came as Taliban negotiators entered a third week of talks with American diplomats in the Persian Gulf kingdom of Qatar.

In the assault, a large force of Taliban insurgents surrounded a base in the Bala Murghab district. After four hours of fighting, the militants captured or killed all of the soldiers in their base, as well as others at two outposts nearby, according to Abdul Aziz Beg, head of the Badghis provincial council.

The episode was the deadliest in a weeklong insurgent campaign that has killed, wounded or captured 70 soldiers in the district, Mr. Beg said. “The district is on the verge of collapse,” Mr. Beg said. “The fighting has gone on for a week, but the government is not paying any attention.”

Qais Mangal, a spokesman for the Afghan Ministry of Defense, confirmed the attack and said that four security outposts were captured by the Taliban. “We lost contact with all of the personnel there,” he said. “We don’t know the casualty figures.”

Reinforcements, including commandos and air support, were deployed to the district as fighting continued, Mr. Mangal said.

The area has been the site of constant conflict for years, and the Taliban have made numerous efforts to take control of the district. The heavily mountainous area offers the promise of a border sanctuary for the insurgents.

The attack came 10 days after a Taliban attack in southern Helmand Province in which 20 insurgents penetrated the defenses of an Afghan Army camp, killing as many as 40 soldiers. American forces stationed in the base helped to repel the Taliban attack.

On Monday, smaller Taliban attacks in Samangan, Sar-i-Pul, Balkh, Kunduz and Helmand Provinces were reported to have killed at least 13 members of the security forces. The casualties reflected the unusually high tempo of insurgent attacks during the winter months, when cold weather and snow blanket much of the country.

In January, President Ashraf Ghani, speaking at the World Economic Forum in Davos, Switzerland, said 45,000 members of the security forces had died since he took office in September 2014 — a much higher total than anyone in his government had previously acknowledged.

The American military has also increased attacks against the Taliban, seeking leverage in the peace talks with the militants.

The Taliban, claiming credit for the attack in Badghis Province, said they had killed 20 soldiers. A spokesman, Zabihullah Mujahid, posted photos on his Twitter feed that he claimed were of the Afghan soldiers taken prisoner. It was not possible to verify their authenticity.

The fighting in Badghis began Saturday, when a Taliban attack killed eight soldiers, with six others taken prisoner, followed by Monday’s much deadlier assault, according to an Afghan official who spoke on the condition of anonymity because he had been banned from talking to the news media.

In a familiar pattern, Afghan government officials attributed their forces’ failure to the Taliban’s purported possession of superior equipment, particularly night vision goggles and weapons with laser sights, and the insurgents’ greater numbers.

“The situation in Bala Murghab district is very bad,” said Saleh Mohammad Mubarez, the commander of the local police forces there, adding that his men were poorly equipped compared to the insurgents, who he said numbered 2,500.

“The majority of our outposts have collapsed to the Taliban,” Mr. Mubarez said. “We only have outposts in the bazaar, at the police headquarters and government offices. There has been continuous fighting for the last three nights, but still no reinforcements have arrived. We are all under siege.”

A police officer named Safiullah, reached by telephone in the district, said that reinforcements had not been able to arrive by air because the insurgents now controlled outposts close to the local air strip.

Allah Nazar, 40, who lives near the site of the fighting in the Bala Murghab district, said he saw Afghan military helicopters abort efforts to land after coming under Taliban fire from the ground. He said he also saw the insurgents march 30 soldiers past his home and off to captivity.

“The situation is very bad here,” he said.