Taliban Deputy Chief Arrives in Qatar for Talks With U.S. 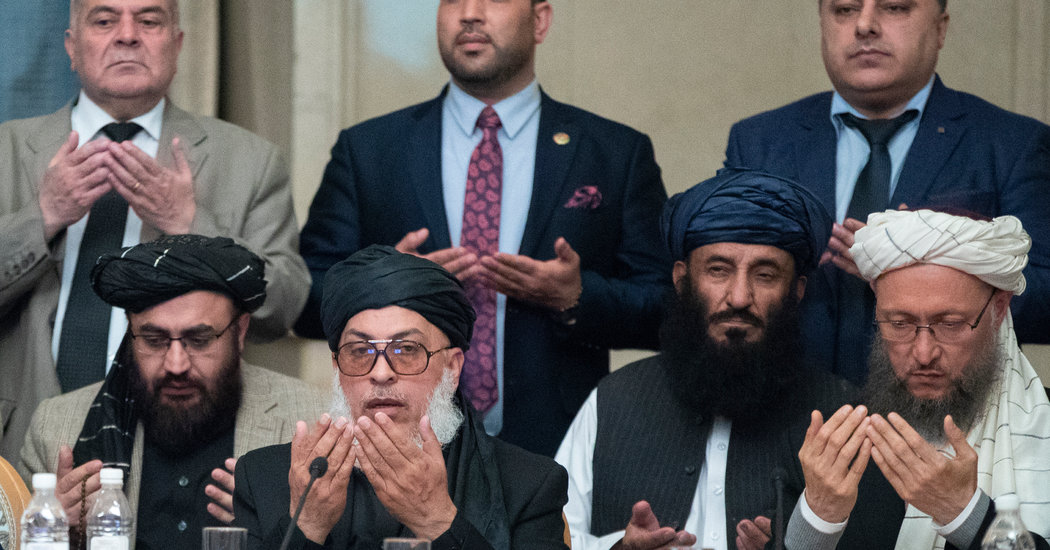 KABUL, Afghanistan — The Taliban’s deputy leader, Mullah Abdul Ghani Baradar, arrived in Qatar on Sunday, officials said, for what could be the highest-level negotiations yet between the insurgents and American diplomats on ending the long Afghan war.

The next round of talks, scheduled to begin on Monday in Doha, the Qatari capital, is expected to focus on the details of a framework deal that the two sides reached in principle last month. Under that framework, American troops would withdraw from Afghanistan in return for a Taliban guarantee that Afghan territory would never be used by terrorists.

The talks have so far excluded the Afghan government. American officials have said that any final agreement would require the insurgents to meet with Afghan officials and to declare a cease-fire to ease the burden of a war that is taking lives in record numbers.

Visiting Kabul, Zalmay Khalilzad, the special envoy leading the American delegation, said he would be pushing the insurgents to agree to the steps with the Afghan side, a process complicated by deep divisions among the country’s government and the political elite.

[Read about the three Afghan scholarship students from the 1970s who are now at the center of peace talks.]

Mullah Baradar’s travel to Doha from Pakistan, where he had been detained for years, was confirmed by a Western official who is closely following the peace developments but who requested anonymity, as he was not authorized to speak to the news media.

Sayid Akbar Agha, a former Taliban official who still has contacts with the group, also confirmed the move, saying, “Mullah Baradar reached Doha an hour ago, and he will take part in peace talks with Khalilzad.”

Kai Eide, a former United Nations envoy to Afghanistan who was involved in some of the earliest peace contacts with the Taliban, said Mullah Baradar’s arrival to join the Taliban’s negotiators based in Doha was an encouraging sign that the insurgency’s top leadership was directly engaging in talks.

“Baradar’s participation certainly means that the Doha team will become more of a decision-making body than before,” Mr. Eide said. “From my own experience 10 years ago, I believe that he was already, before his arrest, the most prominent Taliban leader in favor of finding a political settlement.”

Mullah Baradar, one of the Taliban’s founding leaders, was instrumental in their regrouping as a strong insurgency after the United States toppled their regime in 2001. Around eight years later, he made contacts with the Afghan government at the time, drawing the ire of the Pakistani military, which has been supporting the Taliban as a proxy force and giving its leadership sanctuary.

The mullah was arrested in a joint operation of Pakistani and American agents, at a time when the United States military was still pursuing a victory on the battlefield and had not embraced a political resolution to the war.

Mullah Baradar was released from Pakistani custody in October at the request of the American government, which hoped he could help end a war the Trump administration desperately wants behind it. But his delay in arriving in Doha repeatedly raised doubts about how free he actually was — with Afghan officials and some Taliban sources suggesting Pakistan was still closely watching him.

Mullah Baradar’s arrival for peace talks gives the Americans a senior interlocutor who can finalize a deal and then use his weight with the Taliban’s rank and file to put it in place. Even so, moving the peace talks to the next stage, with Afghan government involvement, still seems daunting.

The Taliban have refused to meet with the Afghan government, while President Ashraf Ghani has insisted that the peace talks will not go anywhere unless the insurgents formally sit with his administration.

A large group of Afghan politicians, led by former President Hamid Karzai, met with the Taliban in Moscow this month in what they hoped could be an icebreaker for broader talks between the groups. But officials in the Ghani government heavily criticized the move, saying it undermined the fragile Afghan state at a critical time.

The government and the opposition have also vehemently disagreed over the makeup of a negotiating team for when the Taliban do agree to formal talks with Afghan officials. Mr. Ghani’s choice — a group of negotiators that would include several government ministers and be led by his chief of staff — was denounced as unrepresentative by the opposition. Mr. Khalilzad, the American envoy, has also said the government would have to make its team inclusive for negotiations to move forward.

Mr. Ghani has called for a loya jirga, a grand consultative meeting of about 2,000 representatives from across Afghanistan, next month to define the parameters for talks with the Taliban. Officials hope the meeting could bridge the gap between the positions of the government and the opposition, building consensus for a united peace effort.

Mr. Eide, the former United Nations official, said Afghanistan’s political establishment needed to unite around the unique opening for peace, or the current momentum could collapse.

“If that happens, it may take a long time before another attempt could be made to find a political settlement,” Mr. Eide said.