Suleimani’s Gone, and the Iran Nuclear Deal May Be Next 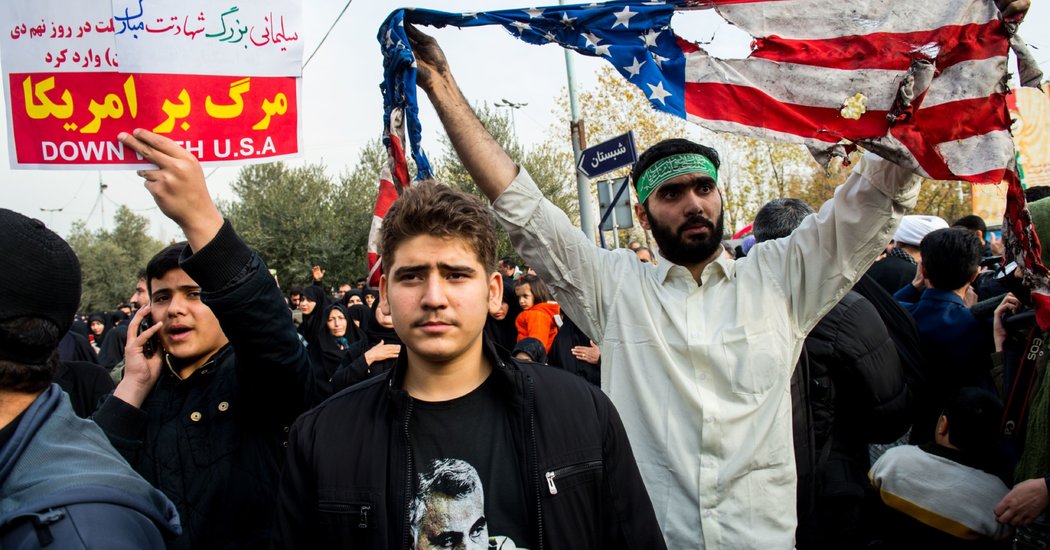 BRUSSELS — How Iran will respond to the American assassination of Maj. Gen. Qassim Suleimani remains a matter of speculation, but one outcome seems almost certain: the end of Europe’s long effort to keep the 2015 Iranian nuclear deal alive.

In interviews on Friday, European analysts envisioned a number of baleful results from the killing of the general, who was a national hero and potential political leader in Iran, and whose death Tehran has vowed to avenge.

Among those were the downgrading of diplomacy, the destabilization of Iraq and the further strengthening of Iran’s hard-liners and the Islamic Revolutionary Guards Corps.

But the more immediate threat, they said, was to the nuclear deal negotiated by President Barack Obama in 2015.

President Trump pulled the United States out of the treaty in May 2018, calling it “a horrible one-sided deal that should have never, ever been made,” and imposed punitive new sanctions as part of a “maximum pressure” campaign.

The other signatories — Europe in particular, but also Russia and China — tried hard to preserve the agreement, known as the Joint Comprehensive Plan of Action. And Iran initially said it would adhere to its treaty obligations. But Tehran has since taken a series of steps away from the treaty, and analysts fear that it may now renounce all of its obligations.

Tehran’s strategy could become clear in a matter of days, as it had already said that it was about to take another step away from the accord.

There was speculation that Iran would return to enriching uranium at 20 percent, a major breach of the deal, which the European signatories — France, Britain, Germany and the European Union — have warned against, said Ellie Geranmayeh, an Iran expert with the European Council on Foreign Relations.

“This would give Europeans even less breathing room to keep the J.C.P.O.A. alive until November 2020,” when the world would know whether President Trump is re-elected, Ms. Geranmayeh said. “It will be very difficult for the Europeans to hold it together.”

After conversations on Friday morning with officials in Tehran, she said that “people inside Iran pushing for the diplomatic process the Europeans have been advocating have lost a lot of ground.”

She said she expected the Iranian response to the killing to be on different tracks, potentially including military attacks on American targets in Iraq, Syria, Afghanistan or elsewhere; cyberattacks; or various other possibilities.

Part of the Iranian debate, she said, is whether to retaliate openly or through proxies in a more deniable way, which has been Iran’s practice in the past. “But with the internal pressure building up inside Iran, and now this external pressure, Iranian decision makers will have to let off some steam somewhere,” Ms. Geranmayeh said.

Carl Bildt, the former prime minister of Sweden, said that Europe had been trying to prevent war between Iran and the United States for a decade, but that the scope for salvaging the nuclear accord now “is very small, and the scope for diplomacy is extremely limited.”

There was a narrowing window before the elections that Iran is due to hold next month, which the conservatives were already expected to win, Mr. Bildt said. “But that window is now gone.”

Still, he said, Iran is likely to be careful on how far it acts beyond the accord, since it has tried to keep the nuclear issue largely separate from its regional battles and interests. “I think their response will be more likely on the kinetic side rather than the nuclear one, at least not more than they were going to do anyway,” Mr. Bildt said.

His larger concern is the effect on Iraq, which is already a fragile state. “With Iraq now a battleground between the U.S. and Iran,” Mr. Bildt said, “the state of Iraq is weakened considerably more, which will have consequences for everyone,” including Europe.

For François Heisbourg, a French defense analyst, the killing of General Suleimani creates great uncertainty, and could even produce a push for the general’s Islamic Revolutionary Guards Corps to take over the Iranian government. “Iran will react,” he said. “But will this trigger new dynamics in the Iranian government?”

Yet the death of even such a prominent military commander may not change Iran’s fundamental calculus of its own interests, which have so far meant dissolving the edges of the nuclear deal without prompting the Europeans to abandon it, Mr. Heisbourg said.

On a more hopeful note, Mr. Heisbourg said that given Mr. Trump’s stated desire to avoid further American military engagement around the world, he might now — having shown toughness — be more open to negotiating with Iran.

And Iran, after some measured retaliation — having watched the tactics of North Korea’s leader, Kim Jong-un, with Mr. Trump — might even go along with it.

The recently departed chief of the European Union’s foreign and security policy, Federica Mogherini, called the killing of General Suleimani “an extremely dangerous escalation” in the Middle East. But she said on Twitter that she hoped “some of the diplomatic achievements of the past will be preserved.’’

One of her top advisers was more doubtful.

“Even before this killing, Iran was considering whether the next step would be 20 percent enrichment, but now it’s reasonable to assume that and even more,” said the adviser, Nathalie Tocci, who is director of Italy’s Institute of International Relations. “And it’s more or less safe to conclude that there’s very little left we can do” on the nuclear accord.

The Europeans “should have been braver” on the nuclear deal, Ms. Tocci said. That would have included getting its alternative trading system with Iran — intended to circumvent American economic sanctions — up and running faster and on a larger scale, and not just for humanitarian goods.

Just $2 million in trade was in line this month for the barter program, known as Instex — an amount that the Iranians regard as risible, Ms. Tocci said. “It could have been $200 million,” she said, with more European courage and autonomy.

The program was also hindered by a separate initiative by President Emmanuel Macron of France, who tried to be a mediator between Washington and Tehran for a program of prepayment of Iranian oil sales. Iran got excited about that, Ms. Tocci said, but “Macron tried in September to get Washington’s permission and was told, ‘No.’”

“It was very French, a huge distraction, and three months were lost,” Ms. Tocci said. And with the Iranian elections coming next month, “given that the conservatives were bound to win, even moderates would have made relatively hard-line moves now.”

Whatever the eventual reverberations of the killing, it will be another reminder to Europeans of their collective weakness in the face of unilateralist American policy, Ms. Tocci said.

“Europe is again exposed to the reality that its policy in the Middle East is ancillary to U.S. policy there,” she said. “So as the U.S. withdraws or attacks or whatever it does, we’re exposed to the ensuing mess without the tools to develop an alternative policy.”

Europe talks more and more now about “strategic autonomy” from the United States and acting more to defend its own interests, Ms. Tocci added. “But there remains almost a psychological attitude of subservience to Washington. We talk about it and skirt around it, but we’re not there yet.”