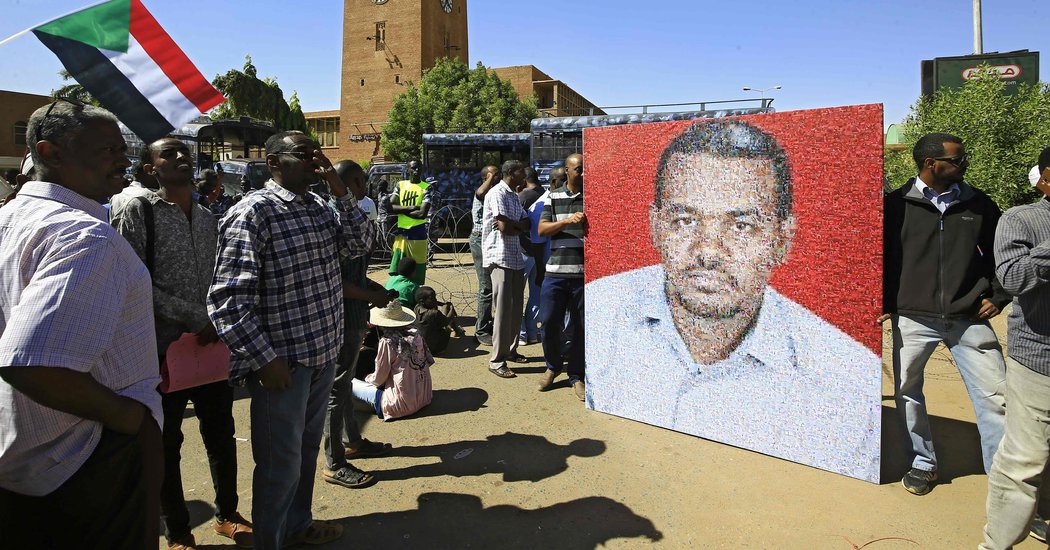 NAIROBI, Kenya — A Sudanese court on Monday sentenced to death 29 members of the national intelligence service for the torture and killing of a teacher, the latest in a series of convictions and investigations this month targeting the government of the deposed president, Omar Hassan al-Bashir.

The court sentenced the men in the killing of Ahmed al-Kheir, a teacher who died in custody in February during mass protests against Mr. al-Bashir’s rule. Mr. al-Kheir, 36, was arrested in January from his home in Khashm el-Girba, in the eastern state of Kassala, on allegations that he had helped to organize the protests, according to news reports.

Following his death, family members told Reuters that Mr. al-Kheir’s body had bruises showing that he was beaten while in detention.

Dozens of security officers filled the court on Monday as the judge read the charges against the accused, who were seated in a dock surrounded by metal bars. As the ruling proceeded, some of the defendants repeatedly yelled, “Monsters!”

Mr. al-Kheir’s death became a focus of demonstrators’ outrage early this year, as they demanded an end to the autocratic rule of Mr. al-Bashir and his allies, a tenure that was marked by corruption and brutality.

Outside the court in Omdurman, the country’s second-most populous city, a large crowd gathered, many of them carrying the Sudanese flag and holding pictures of Mr. al-Kheir.

Itimad al-Mujamar, a representative of the Sudanese teacher’s union, said at a news conference on Monday that the convictions were “a win for justice.”

The ruling, he said, “sends a message to the other martyrs of the revolution and their families that we are intent on getting our lost rights back.”

The Sudanese Professionals Association, an umbrella group of unions that steered the protests against Mr. al-Bashir, said they hoped the family and students of Mr. al-Kheir would find “some solace in this ruling.”

The verdict came weeks after another court convicted Mr. al-Bashir, 75, of money laundering, and sentenced him to two years in a rehabilitation facility, citing his age. Mr. al-Bashir ruled Sudan for almost three decades but was ousted in April after months of protests precipitated by high bread prices persuaded military commanders to turn against him.

In August, Sudan’s generals and protest leaders formed an 11-member sovereign council to govern the country for three years, until elections can be held. Abdalla Hamdok, an economist, is currently serving as prime minister, while Lt. Gen. Abdel Fattah al-Burhan leads the sovereign council.

In October, the government appointed two independent judges after protesters demanded that previous appointees be removed before prosecutions went ahead against members of the old leadership and those responsible for crackdowns against anti-Bashir protests.

This month, one of the new appointees, the Sudanese attorney general Taj al-Sir al-Hibir, said the government would open investigations into the crimes committed in the western region of Darfur during Mr. al-Bashir’s rule.

About 300,000 people were killed in the conflict there, and 2.7 million were forced from their homes, according to the United Nations. Mr. al-Bashir is wanted by the International Criminal Court over his role in the atrocities in Darfur.

Mr. al-Bashir could also face a slew of other charges related to accusations that he ordered the killing of pro-democracy protesters earlier this year and his role in the coup that brought him to power in 1989.

In looking into crimes committed under Mr. al-Bashir, the transitional government’s law enforcement and judicial systems want to be seen as responsive to the protesters’ demands for justice, said Cameron Hudson, a senior fellow with the think tank Atlantic Council.

But while efforts to hold security officials responsible are “welcome progress,” Mr. Hudson said, “there is also a degree of score-settling and purging going on within the intelligence services.”

Many officers remain loyal to former intelligence chief Salah Gosh, who is being investigated by the current administration. He quit days after Mr. al-Bashir was ousted, and then left the country.

Given that, Mr. Hudson said, it was important that “the arrests and trials be seen as credible in the eyes of the people and targeting those truly responsible for ordering and carrying out these crimes.”