South Korea Goes to the Polls, Coronavirus Pandemic or Not 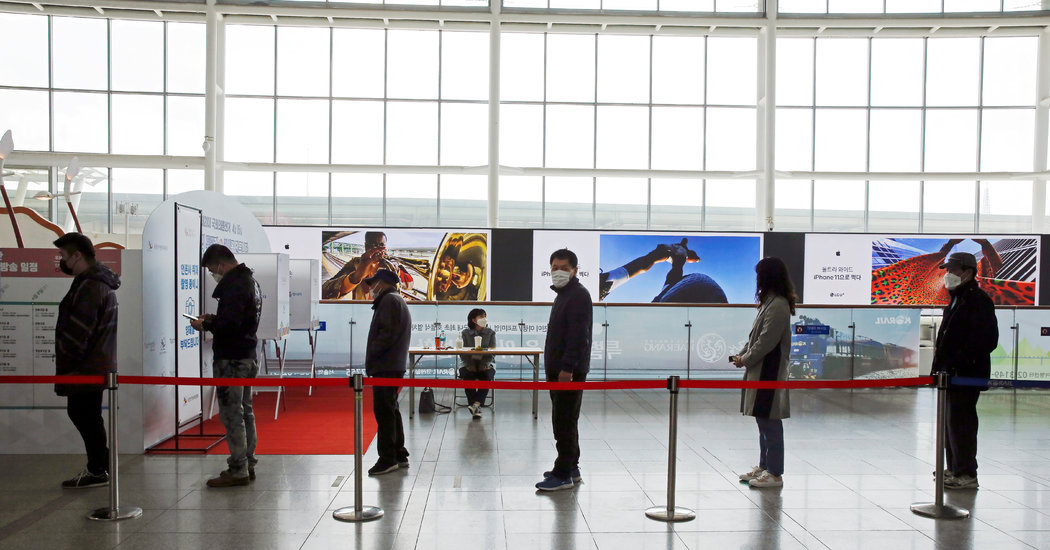 SEOUL, South Korea — They came wearing masks and stood in line at three-foot intervals. They were required to have their body temperatures taken, to rub their hands with sanitizer and to put on disposable plastic gloves handed out by officials. Then they entered the booths and voted, as South Korea pressed ahead with its first election in a time of epidemic.

The coronavirus pandemic is disrupting political calendars around the world, causing delays and triggering electoral chaos​ in the United States. It has provoked voter ire in Wisconsin, where many absentee ballots failed to arrive in time and voters were afraid to put their health at risk by going out to cast their ballots.

In South Korea, the parliamentary election is proceeding relatively seamlessly so far — albeit with a lot of preparation and protocols in place to protect voters. The government is trying to assure its 44 million eligible voters that it is safe to leave their homes to go to the polls, even as it is urging the public to ​avoid large gatherings and ​practice social distancing​.

To make the voting run smoothly, South Korea has mobilized armies of public servants, including young men doing civic duty in lieu of mandatory military service, to prepare for the election. They have disinfected 14,000 voting stations across the country and marked waiting lines at three-foot intervals so voters avoid standing too close.

South Koreans were also allowed to vote in advance on Friday and Saturday at any of the 3,500 balloting stations opened for that purpose. Anyone showing temperature readings higher than 37.5 Celsius (99.5 Fahrenheit) would be stopped at the gates of polling stations and escorted to a separate area to vote. The voter would then be sent for testing, and the voting booth disinfected.

Officially, the election for South Korea’s 300-member National Assembly is scheduled to take place on Wednesday. But nearly five million people cast ballots on Friday, and more were expected to vote on Saturday. The advance voting system, introduced in 2013, is serving as a dress rehearsal of sorts for the extraordinary plan ​disease-control officials have designed for an epidemic-era election.

“The challenge for us has been how to protect the suffrage of the people and at the same time install safeguards to minimize the danger of infection that could happen during the election,” said Kim Gang-lip, a vice health minister and senior coordinator for the government’s war against the coronavirus.

The epidemic brought an unexpected political bonanza for President Moon Jae-in’s Democratic Party as it campaigned for the parliamentary election, widely seen as a midterm referendum on his government.

In recent weeks, Mr. Moon’s government has won plaudits for bringing the epidemic under control quickly and effectively, and his approval ratings have surged as a result. That burnished the image of his government, which has been hammered for months by a slowing economy, stalled diplomatic efforts with North Korea, huge anti-government protests and scandals involving Mr. Moon’s closest allies.

“This election is mainly about whether the government has dealt well with the coronavirus or not,” said Park Sung-min, head of Min Consulting, a political polling company. “The epidemic sidelined all the policy complaints about President Moon. Instead, people believe that his government has done quite well as they see the epidemic spiraling out of control in other countries.”

The number of newly confirmed cases in South Korea has fallen below 50 a day this week, down from a peak of 813 on Feb. 29. South Korea has confirmed 10,400 cases of the coronavirus, although 70 percent of them have recovered and been sent home.

The country attributed the success to its ability to test large numbers of people to screen out patients quickly for isolation and treatment​, along with its tireless public-heath campaign urging social distancing​. It has banned outdoor political rallies and discouraged religious services. When schools reopened this week after a weekslong delay, they offered their classes only online.

​South Korea has also managed to curb the epidemic without locking down cities as China and other countries did. In Seoul on Friday morning, subway cars were jam-packed with commuters. The country’s decision to ask millions of voters to vote reflects its determination to regain as much normalcy as it can, even though it acknowledges that its battle against the coronavirus is far from over.

“I always try to vote early to beat the crowd, but more so this year than before,” said Kim Hee-suk, 70, emerging from a voting station in Seoul on Friday.

​As​ the electoral and disease-control authorities prepared for the election, they took pains to protect the voting rights of 3,100 patients still infected with the virus.

The government first gave the patients the choice to vote by mail between March 23 and 28. After the voting-by-mail ended, election officials in full protective suits opened special voting stations in eight temporary shelters where many new patients have been held for isolation and treatment. More than 900 patients and medical personnel in those facilities can vote on Friday and Saturday.

But officials have yet to decide how to ensure the voting rights of an estimated 70,000 South Koreans who might be under a mandatory two-week quarantine when Wednesday’s vote takes place. At least six people have been indicted on charges of breaking the quarantine.

One option under discussion is for officials to escort them out of quarantine to vote in a specific time slot on Wednesday to minimize contact with other voters.

“We are working on a guideline so that we can prevent infections while allowing these people to vote,” said Jung Eun-kyeong, head of the Korea Centers for Disease Control and Prevention.

Electioneering in South Korea is usually a festive affair, with young volunteers performing synchronized dances to draw voters’ attention. Vans with blaring loudspeakers and plastered with colorful posters weave through the streets.

This year, the mood was somber. As part of disease-control guidelines, candidates were advised to wear masks and avoid rallies and handshakes. Volunteers with the campaigns swept streets with brooms and handed out fliers, instead of loudly chanting slogans.

South Korean campaigns typically revolve around issues like North Korea’s nuclear threat, the economy and corruption. But the virus has shifted the debate.

Both Mr. Moon’s supporters and critics cite his response to the epidemic as the single biggest reason they supported or opposed him. Nearly 73 percent of voting-age Koreans said they wanted to vote, coronavirus or not, compared with 64 percent four years ago, when the country held its last parliamentary poll, according to a survey conducted by Gallup Korea on behalf of the National Election Commission.

Once criticized for underestimating the threat of the coronavirus, Mr. Moon saw his political fortune rising when his government deployed diagnostic kits in large quantities and established drive- and walk-through testing stations around the country. Foreign leaders have called Mr. Moon in recent weeks asking South Korea for supplies of test kits and disease control know-how, according to his office.

His approval ratings rebounded to 56 percent last week from 41 percent in late January, according to Gallup Korea polls. His party zeroed in on the Moon government’s successful battle against the coronavirus, adopting the campaign slogan: “We protect the people!”

The opposition ascribed South Korea’s epidemic-control success not to the Moon government but to the efforts of doctors and nurses. Still, it too sought voters’ support by appealing to their deep sense of insecurity at a time of epidemic.

“We can live only when we change the government!” read the main campaign slogan of the United Future Party, the chief rival of Mr. Moon’s party.