Some of Europe, ‘Walking a Tightrope,’ Will Loosen Coronavirus Restrictions 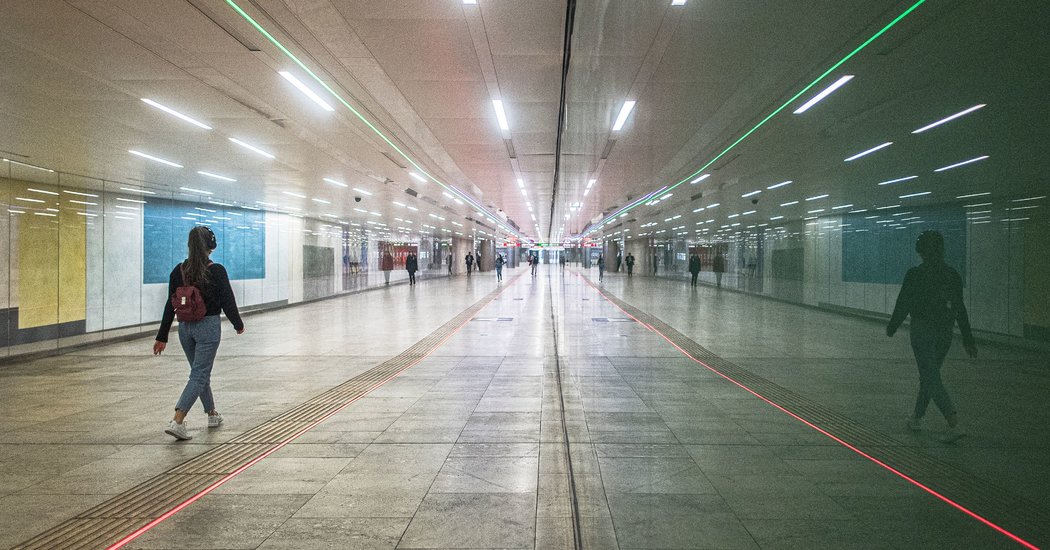 BERLIN — Austria is allowing small shops to resume business after Easter. Denmark is reopening nurseries and primary schools. The Czech Republic is planning to lift a travel ban.

Gingerly, and with plenty of caveats, some corners of Europe are tiptoeing toward a loosening of the strict lockdown measures that have been in place for close to a month to slow the spread of the coronavirus, idling economies and leaving citizens in an uneasy limbo of social isolation.

But even as the number of new infections appears to be plateauing in several European countries, the message from leaders is clear: The next phase is not a return to normality. It is learning how to live with the pandemic — possibly for quite a long time.

Wearing a face mask and speaking behind plexiglass, Chancellor Sebastian Kurz of Austria illustrated what that new normal might look like when he announced “a step-by-step resurrection” of the economy this week. “We are not out of the woods,” he said.

Prime Minister Mette Frederiksen of Denmark was more explicit: “It’s like walking a tightrope,” she said. “If we stand still, we may fall. If we go too fast, it may soon go wrong. We don’t know when we’ll be on firm ground again.”

This week’s announcements came as China lifted its lockdown of the city of Wuhan on Wednesday, a powerful symbolic victory for the country and for a world battling a virus that first emerged there.

European governments are eager to give their citizens a sense of hope and to reboot economic activity, too. But overshadowing that desire is the real risk of unleashing a second wave of mass infections and deaths.

How soon is too soon to allow the resumption of some activities — and which activities — is the overriding question.

While the number of deaths from the disease continues to accelerate in the United States, it has begun stabilizing in parts of Europe and even declined in hard-hit countries like Italy. But the number of new daily infections in major countries like Germany, France and Britain, the three largest on the continent, may peak only after Easter.

Austria, Denmark and the Czech Republic, the three countries that have begun planning an exit from the lockdowns, are all smaller nations that moved early to shut down public life and perhaps as a result have been spared the worst of the fallout from the pandemic.

Many other countries are reluctant to announce a concrete timetable. The European Commission abandoned plans to present a “road map” for ending restrictions this week after several capitals insisted that such a move would send a dangerous message at a time when they are still asking millions of people to stay at home.

On Wednesday, the World Health Organization’s director for Europe, Hans Kluge, warned that despite seeing “positive signs,” it was too early to roll back containment measures.

“Now is not the time to relax measures,” he told a news conference. “It is the time to once again double and triple our collective efforts to drive toward suppression with the whole support of society.”

Instead of searching for a return of normality, many experts warn that living with the virus may be the new normal, at least for months to come. The only time the world could hope to return to anything resembling pre-coronavirus normality was after a vaccine had been found, they said.

“This won’t go away until we have an effective vaccine, hopefully in 12 months time,” said Walter Schachermayer, a professor of mathematics at the University of Vienna who was consulted by Mr. Kurz’s team on their exit timetable.

The idea that immunity would rise fast enough in any country to allow social distancing measures to be abandoned before then — without paying for it with an exorbitant death toll and overwhelming hospitals — was “a total illusion,” Professor Schachermayer said. “There is the constant risk of a second wave.”

After the Spanish flu first emerged in 1918, he noted, a second wave killed millions a year. There are already signs of a second wave now building in some East Asian countries that recently ramped up business.

That is why, even as Chancellor Kurz’s government announced its tentative opening, it made clear that the situation needed to be constantly monitored and reserved the right to impose restrictions quickly again.

“We will very closely monitor the number of new infections and will immediately pull the emergency brake if need be,” he said.

That monitoring will require a high volume of testing, Professor Schachermayer said. “It’s hard to get it right, because everything comes with a delay of two weeks” because of the virus’s incubation period, he said.

Even so, European leaders and their populations worry that the consequences of not allowing a broader resumption of economic activities could be devastating, too.

Even in Italy, officials have begun talking about “phase two” of the national shutdown starting next month.

“This is an extraordinary result,” the country’s health minister, Roberto Speranza, said on Italian television on Tuesday evening after the latest statistics showed that the rate of contagion had decreased from one person infecting around three people to one person infecting only one.

“The measures have worked, and we can finally start planning the future,” he said.

In Spain, Prime Minister Pedro Sanchez said a ban on all nonessential work might be lifted after Easter, even as he extended the lockdown in his country until April 26. “When we have the curve under control, we will shift toward a new normality and toward the reconstruction of our economy,” Mr. Sanchez said.

What exactly that new normal will look like is unclear, though it is likely to involve mandatory masks in enclosed public spaces and smartphone apps tracking contact with people who are potentially infected. Going back to work and traveling might be contingent on test results, and potentially the presence of antibodies that might provide a measure of immunity.

Early versions of this new reality will soon be rehearsed in Austria, Denmark and the Czech Republic, all of which moved quickly in response to the pandemic.

It paid off. When Austria went into lockdown in mid-March, the number of infections was doubling every three days. Now, with new infections receding every day over the past week, that period has slowed to two and a half weeks.

“Austria acted quicker and more decisively than other countries,” Mr. Kurz told The New York Times in emailed comments. “We have managed to prevent the worst. This also enables us to get quicker out of the crisis again.”

Small shops, hardware stores and garden centers will be allowed to reopen on April 14, followed by other businesses at the end of the month. Restaurants and services that involve close human contact, like gyms and hairdressers, might not get the green light until mid-May or June.

The gradual acceleration of economic activity is accompanied by strict new rules requiring people to cover their nose and mouth in shops and on public transport — and many more months of strict social distancing. Overseas travel is off the cards for now, and most schools might remain closed until the fall. In Denmark, day care centers and primary schools are scheduled to reopen on April 15, though that is subject to the number of infections stabilizing.

Every incremental loosening can be reversed at any point.

Denmark has seen daily deaths gradually decline from a peak a week ago. But restaurants and borders will remain closed for now. The government has also banned large gatherings through August.

Meanwhile, the Czech Republic extended a state of emergency until the end of April even as Prime Minister Andrej Babis announced a loosening of travel restrictions from Thursday. Borders will remain closed to foreigners, but Czechs who need to go abroad will be authorized to do so. Small shops are allowed to reopen on Thursday.

“We are now able to manage the pandemic relatively well,” the Czech health minister, Adam Vojtech, told a recent news conference. “It’s not the pandemic that is managing us.”

If shutting down economies was hard, reopening them will be even harder, officials warn.

The fact that the countries now pioneering the reboot in Europe have chosen such different paths highlights the absence of any clear road map.

“We are in uncharted territory,” said Prof. Elisabeth Puchhammer-Stöckl, the head of virology at the Medical University of Vienna. “We have to figure this out as we go along.”

Only one thing is certain, said Professor Puchhammer-Stöckl, who is a member of the coronavirus task force advising Austria’s health minister.

“We are still living in a pandemic,” she said. “This virus is not going anywhere.”