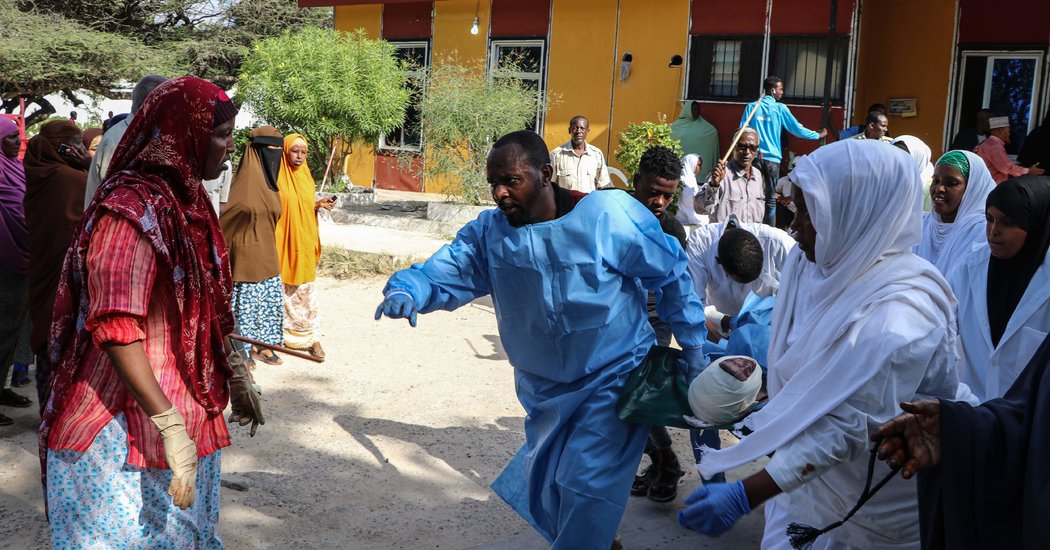 MOGADISHU, Somalia — A truck filled with explosives blew up at a busy intersection in the Somali capital on Saturday and killed at least 76 people in the latest sign of resurgent militant activity in a country that has long struggled to banish violent extremism.

A bus carrying university students to their campus was struck by the blast, which left the streets littered with bodies and the mangled frames of vehicles. It was the worst attack in Somalia in more than two years.

There was no immediate claim of responsibility, but suspicion immediately fell on the Shabab, a terrorist group linked to Al Qaeda which controls large parts of the country and raises considerable funds through local taxation and extortion. Despite intensified American airstrikes and a long-running African Union offensive, the group has carried out deadly attacks not only in Somalia but also in neighboring Kenya and Uganda.

“Unfortunately, it doesn’t appear that much progress has been made against combating what has become a very resilient and deadly insurgency,” said Murithi Mutiga, the Horn of Africa project director at the International Crisis Group, a research organization.

The attack, one of several this year in Mogadishu, added to concerns about the abilities of Somali forces as African Union troops begin to withdraw from the Horn of Africa nation. The African Union peacekeeping operation has been active in Somalia since 2007, but Somali forces are set to assume responsibility for security in May.

Six thousand to 7,000 American troops are stationed in Africa, with the largest numbers concentrated in the sub-Saharan region and in the Horn of Africa. In Somalia, about 600 Special Operations forces are fighting the Shabab from small outposts alongside local troops.

The Pentagon is weighing whether to sharply reduce or pull out several hundred American troops stationed in West Africa as the first phase of a global reshuffling of United States forces. But Defense Department officials said it was less likely that troops would be withdrawn from Somalia because — as Saturday’s attack gruesomely underscores — security in the country remains fraught.

The Pentagon so far this year has carried out 60 drone strikes in Somalia — almost all against Shabab militants, with a handful against a branch of the Islamic State. That compares with 47 strikes against the Shabab in 2018.

While violent extremist groups like the Islamic State also operate in Somalia, none except the Shabab have proved capable of repeated, large-scale attacks in the capital. The Shabab has also declared war on pro-Islamic State cells in Somalia, most of which operate at a distance from Mogadishu in the northeastern Puntland region.

The Shabab, which means The Youth in Arabic, have wreaked havoc in Somalia since 2006, when they began pursuing their goal of establishing an Islamic state. In areas that it controls, the group has banned music, movies, the shaving of beards and the internet.

In recent years, the Shabab have suffered several critical setbacks, including territorial losses, the killing of senior commanders and high-level defections. Yet the group has proved resilient, intensifying its lethal campaign against the Somali government and its allies. Given its control over large areas of the country’s south, it continues to raise considerable revenue and is now manufacturing explosives, according to the United Nations.

Since 1991, following the ouster of the dictator Siad Barre, Somalia has been plagued by conflict and successive humanitarian disasters that have destroyed much of the country’s infrastructure, economy and public institutions.

In 1993, Somalia’s problems drew the world’s attention after 18 American soldiers were killed in an operation aimed at capturing the powerful Somali warlord Gen. Mohamed Farah Aideed — events depicted in the film “Black Hawk Down.” The United States was leading a United Nations mission to end famine and civil war in the country.

For years, Somalia was run by warlords and weak transitional administrations, and did not take the first steps toward recovery until 2012, when a United Nations-backed federal government emerged in Mogadishu.

With a population of about 12.3 million, Somalia continues to rank among the poorest nations in the world. While no longer considered a failed state, it remains in a fragile phase of recovery with a debt-laden economy and soaring unemployment.

Over the last two years, Somalia has also emerged as a central battleground between Persian Gulf monarchies competing for power and profits in the Horn of Africa. The United Arab Emirates and Qatar have each provided weapons or military training to favored factions.

The country is expected to hold elections next year, but a political stalemate between the central government and federal states has dampened the prospect of change.

“It clearly demonstrates that Shabab has the capability and the will to kill civilians, terrorize the population, and destabilize the modicum of governance in the country that does exist,” said Colin P. Clarke, a senior fellow at the Soufan Center, a research organization in New York.

The government, Mr. Clarke said, “continues to flounder, unable to bring security to the war-torn capital.”

Tricia Bacon, an assistant professor at American University, said in an email that the Shabab “remains resilient, strong, able to terrorize Mogadishu at will, and, by extension, undermine the legitimacy of the Somali government.”

In January, the Shabab claimed responsibility for an attack on a luxury hotel and office complex in Nairobi, the Kenyan capital, that killed more than 20 people. In July, militants killed 26 people in a hotel in the southern port city of Kismayo, including a prominent Canadian-Somali journalist, Hodan Nalayeh.

The same month, a suicide attack by the group fatally wounded the mayor of Mogadishu, Abdirahman Omar Osman, a British-Somali citizen. And on a single day in September, the Shabab targeted an American base in Somalia and a group of Italian peacekeeping troops.

Mr. Mutiga of the International Crisis Group said the attacks showed the group’s reach. “This is a year in which they demonstrated a capacity to attack in the capital at a rate that signifies they remain a very potent player,” he said.

The Shabab are suspected in one of the deadliest terrorist strikes in recent years, a double-truck bombing in the heart of Mogadishu that killed nearly 600 people in October 2017.

Saturday’s blast occurred just before 8 a.m. at Ex-control Junction, an intersection that connects Mogadishu to southern and southwestern Somalia.

Mogadishu’s mayor, Omar Mohamud Mohamed, said at a news conference that many of the wounded were students. President Mohamed Abdullahi Mohamed ordered the government to put all of its resources toward supporting the wounded and families of the dead.

“The terrorists massacred the people because of the enmity they have for the country’s development,” he said.

After the attack on Saturday, some Somalis lamented the state of the nation’s politics and asked when lawmakers and leaders would deal with the security situation.

“When will our politicians have human feeling to the relentless massacre against the innocent citizen?” Ahmed Ibrahim, a Mogadishu resident, wrote in a post on Twitter. “Here they are arguing and competing for power, but who will they rule?”