So Help the U.K.: Archbishop Urges Public Prayer After Brexit 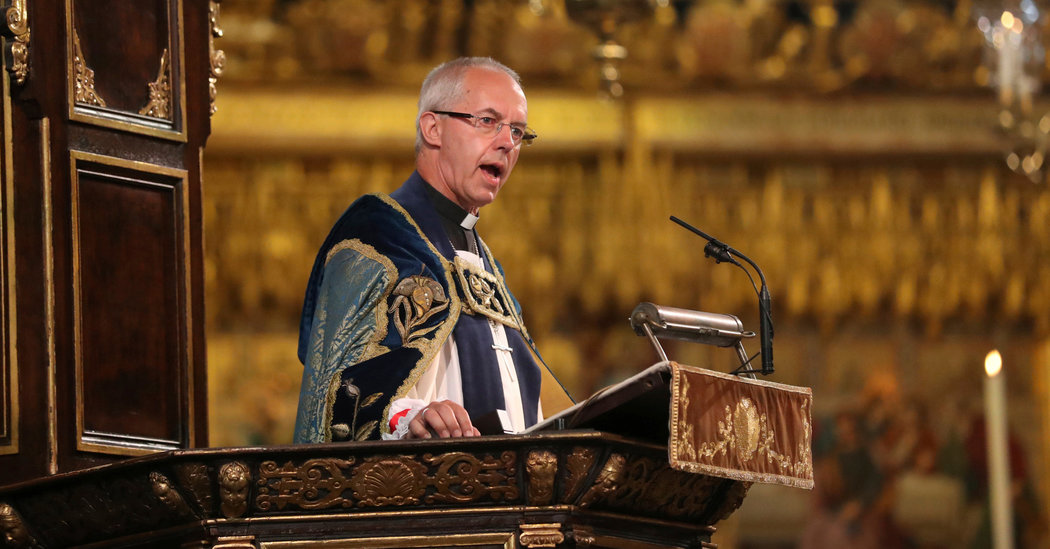 LONDON — The archbishop of Canterbury wants to organize five days of public prayers starting the day after Britain withdraws from the European Union, a local news outlet reported on Sunday.

Justin Welby, the archbishop of Canterbury and principal leader of the Church of England, is seeking to pray in public with the leaders of the Roman Catholic, Methodist, Baptist and United Reformed churches starting on March 30, one day after Britain is scheduled to leave the bloc, The Sunday Times reported.

Prime Minister Theresa May, a practicing Anglican, and Jeremy Corbyn, the leader of the opposition Labour Party, are being invited to join them, the report said.

The archbishop of Canterbury could not be immediately reached for comment on Sunday, but Archbishop Welby, a 62-year-old former oil executive and staunch supporter of Britain’s European Union membership, has been vocal about the possible pitfalls of Brexit, as the withdrawal is known.

He addressed the issue during a speech on Saturday, just five weeks before the country’s expected exit.

“We cannot ignore the warnings that have been proffered about the possible profound impact that the next months may possibly have on the poorest of our society,” the archbishop said during the annual assembly of the General Synod of the Church of England at the church’s headquarters, a short distance from the Houses of Parliament.

He added that the church must be prepared for any difficulties, and that no predictions on the economy were definite.

“That is not project fear,” he said. “It is saying that where there are risks, it is the strongest, not the weakest, who must take the weight of the risk.”

The archbishop, who on Saturday emphasized the need for unity and reconciliation in the society, previously cautioned against leaving the European Union without an agreement to mitigate disruptions.

“That outcome would be not only a political and practical failure, but a moral one equally as serious as ignoring the result of the referendum entirely,” Archbishop Welby told the House of Lords in January.

He added that, in that case, a second referendum would be required.

“This is about more than Brexit, and Parliament must not show itself unfit for the job,” he said.

The collective leadership of the Church of England, a powerful institution in Britain, has been in favor of staying in the European Union. But its flock is hugely pro-Brexit, according to research published in August by the Religion, State and Society journal.

“The main finding is that identifying as Church of England (Anglican) is an important independent predictor of voting Leave even when other relevant factors like age and region are corrected for,” according to poll data gathered shortly after the June 2016 referendum on Britain’s membership in the bloc.

Kevin Featherstone, a professor of European politics at the London School of Economics, said that people expected churches to take a stance on important public issues to avoid condemning themselves to irrelevance.

“For decades, the Church of England has emphasized its social conscience, which can bring it into political controversy,” he said in an email on Sunday. He cited as an example the church’s strong warnings about the inequalities and exclusion brought by so-called Thatcherism in the 1980s.

Mr. Featherstone added that Britons’ fears about the societal and financial implications of Brexit are “natural concerns for the church.”

But if the church’s leadership has generally been more socially progressive than its flock, there might be consequences, he warned.

“Most followers of the church voted to leave the E.U., so church leaders risk being seen as thwarting them if they get into the specifics,” Mr. Featherstone said.

The archbishop is not the only one reported to be calling for divine guidance after Brexit.

This month, the ecumenical ecclesiastical organization Churches Together in Britain and Ireland released Brexit prayers for personal or corporate use, and called all its member churches and associated bodies to join “in a time of dedicated prayer for the political situation in the United Kingdom.”

One line in a Brexit-related prayer referred to Britain’s leaders:

Bring wisdom to confused minds whose decisions are momentous.

The archbishop of York, John Sentamu, also tried out another Brexit prayer at the General Synod on Saturday, which included this line, according to The Sunday Times:

God of eternal love and power, save our parliamentary democracy, protect the High Court of Parliament and all its members from partiality and prejudice.

More broadly, a motion put forward by the archbishops of Canterbury and York to place the voices of poor and marginalized people at the heart of the nation’s concerns passed almost unanimously with one abstention, The Guardian reported.

The church also voted to drop a centuries-old requirement for all churches to hold weekly Sunday services and to make land available for traveling communities that face discrimination and racism.