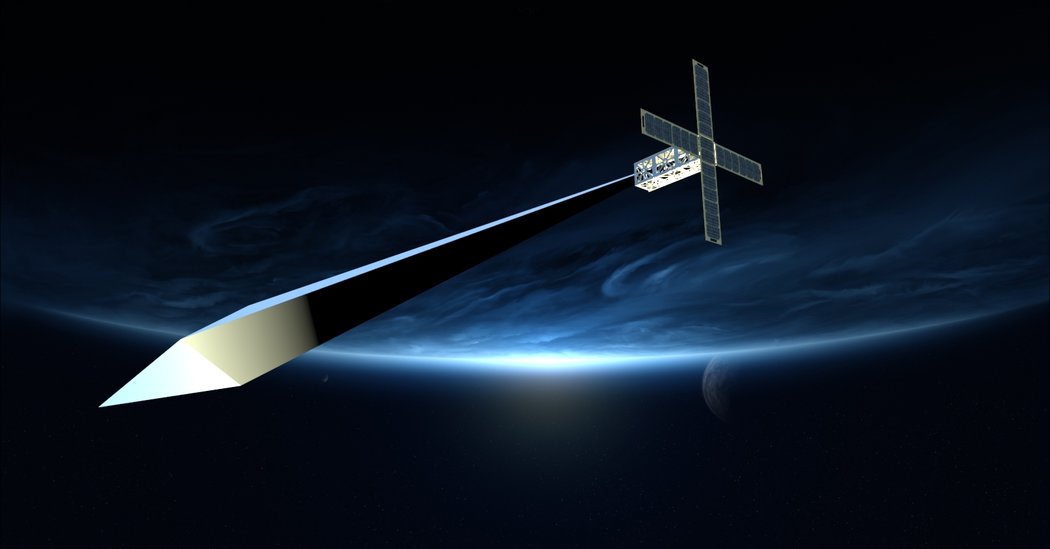 The government shutdown has caused museums in Washington to close and has put exhibitions like the National Gallery of Art’s Tintoretto show, originally scheduled to open on March 10, at risk. It has also endangered an artist’s project nowhere near the Beltway: “Orbital Reflector,” a sculpture by Trevor Paglen that was recently launched into orbit.

The sculpture is not lost in space as much as stuck in a holding pattern before activation, pending clearance by the Federal Communications Commission. According to the artist, it might not survive the wait while F.C.C. workers are on furlough.

A 100-foot-long mylar balloon coated with titanium oxide, “Orbital Reflector” was designed to be visible to the naked eye at twilight or dawn while in orbit for a couple of months. It would then incinerate upon entering the Earth’s thicker atmosphere.

But although it was sent to space, the balloon was never inflated as planned. The small satellite carrying the sculpture and its inflation mechanism went into orbit on Dec. 3 as part of a larger load launched by the SpaceX Falcon 9 rocket. Mr. Paglen said that afterward, his team did extensive “orbital analysis” to ensure a collision-free trajectory and secure F.C.C. clearance to inflate. But communication from the F.C.C. soon ceased because of the shutdown.

“What we’re concerned about,” Mr. Paglen said, “is that every time the satellite goes into sunlight, the entire thing heats up, and then in Earth’s shadow it gets really cold and contracts. If you let this process go on too long, it can damage the electronics.”

“It’s not designed to live indefinitely,” he said, adding, “We would really like to deploy this.”

While at one level “Orbital Reflector” recalls the simple gesture of a child releasing a balloon into the sky, Mr. Paglen’s project has been challenging from the start, with engineering and production costs over three years running about $1.5 million and SpaceX delaying the rocket launch several times last year. (Coincidentally, the same SpaceX rocket also carried into orbit a sculpture-satellite by Tavares Strachan called “Enoch,” which he reports is functioning as planned.) And there’s an ambitious art-world context for Mr. Paglen’s project, with the Nevada Museum of Art acting as a co-producer and showing models of it in its galleries.

The idea behind “Orbital Reflector,” said Mr. Paglen, is to explore who controls outer space by creating a satellite with “no militaristic or commercial ties” and with its only purpose being visibility. “It’s about who gets to do what in space,” he said, which makes the fact that a political standoff has endangered the project more pointed.

“It’s ironic and sad,” he said, “but not nearly as sad as the fact that there are hundreds of thousands of people not being paid.”