Shooting Kills 2 in Germany; Reports Say Gunfire Was Near Synagogue 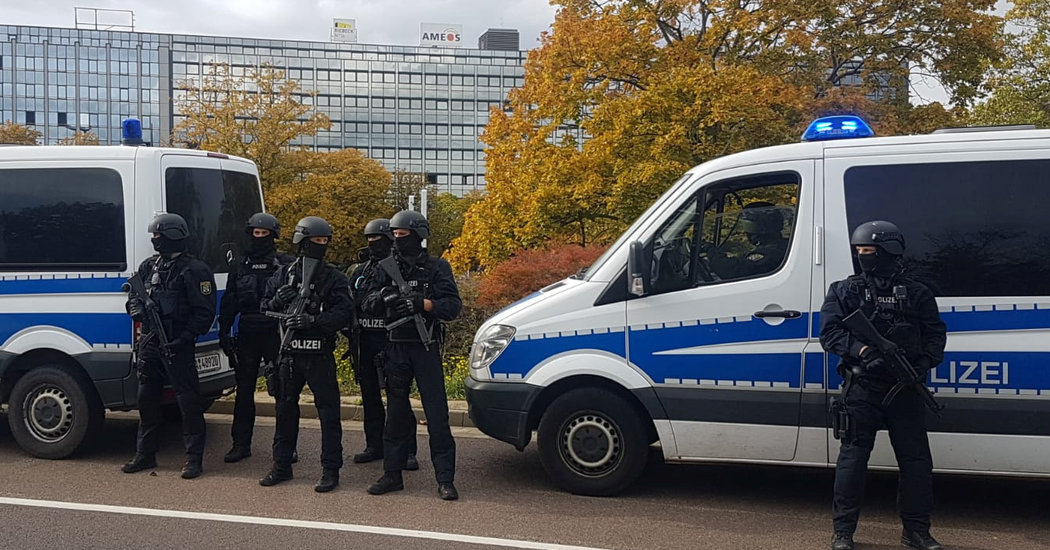 BERLIN — At least two people were fatally shot on Wednesday in the east German city of Halle, the police said, with local news outlets reporting that at least one gunman had opened fire at a synagogue.

The police suggested that more than one person was involved and had fled the scene. One suspect was arrested shortly after the attack and the authorities warned people to stay in their homes while they carried out their search for other potential suspects. The area around the synagogue was cordoned off and other major arteries in the city were blocked.

“Several shots were fired,” the Halle police said in a statement posted to Twitter. “The suspected perpetrators fled in a vehicle.”

Germany’s federal prosecutor took over the investigation into the shootings, a spokeswoman said on Wednesday, a step indicating that the authorities were treating the attack as politically motivated.

A witness to the shooting, which took place in broad daylight, told local broadcaster MDR that he had seen a gunman dressed in military gear and armed with several weapons firing at the synagogue. Other news outlets reported that a hand grenade was thrown into a Jewish cemetery nearby.

Prayers for Yom Kippur began at 9:30 a.m. Wednesday and had been scheduled to continue until 8:30 p.m. It is the holiest day in the Jewish calendar, and services brought many people to the temple.

Max Privorotzki, a leader of the Jewish community in Halle, told Der Spiegel that it appeared that the gunman or gunmen had tried to enter the synagogue, but that police officers posted outside the building had resisted the attackers.

“At the moment, there are 70 to 80 people inside the synagogue,” Mr. Privorotzki said.

The police told MDR that more shots had been fired in Landsberg, a suburb of Halle, though those reports could not be independently confirmed. The mayor of Halle convened a crisis team in reaction to the shootings and urged residents to remain in their homes until further notice.

Immediately after the shooting, television footage showed police officers wearing helmets and carrying automatic weapons as they patrolled streets around the synagogue that had been sealed off with red-and-white tape. Other officers used a ladder to climb over a high brick wall surrounding the cemetery.

One attacker was thought to have fled in a taxi, Der Spiegel reported, and a suspect was apprehended on the highway outside Halle.

Reinforcements were sent to provide extra security around synagogues in nearby Dresden and Leipzig, the local police said.

Anti-Semitic crime and hate crimes targeting foreigners have both increased almost 20 percent in Germany over the past year, according to official figures published in May. The data included a wide range of offenses, including assault, insults, graffiti, hateful postings online and the use of Nazi symbols.

All Jewish institutions in Germany, including synagogues, schools and other cultural centers, are guarded around the clock by local police. In Berlin, which has the country’s largest Jewish population, the police have also provided security to cafes, restaurants and shops that are owned and frequented by Jews.

Earlier this year, the country’s top official for efforts against anti-Semitism warned that Jews should not wear their skullcaps everywhere in public.