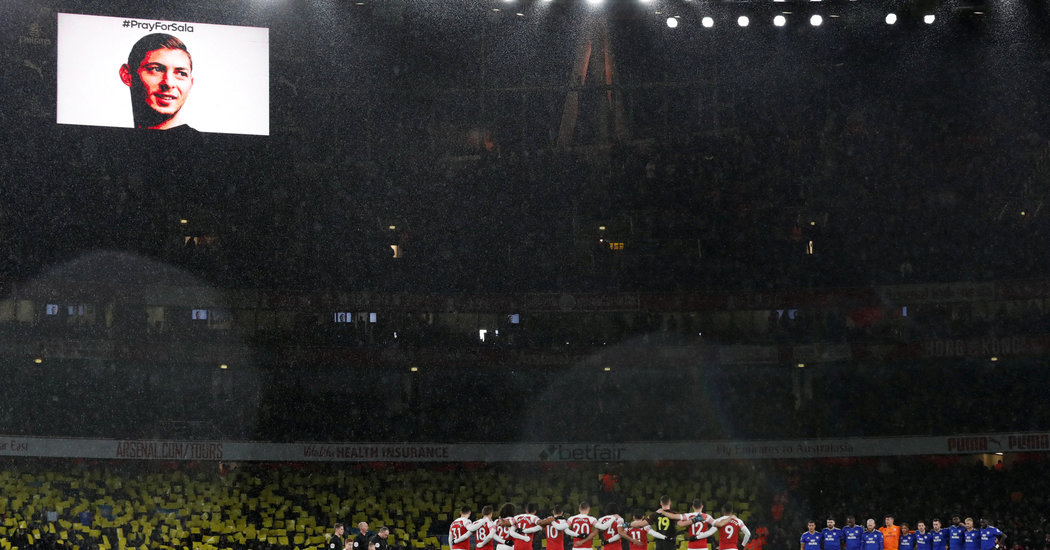 LONDON — Parts of seat cushions believed to be from the small plane carrying the Argentine soccer player Emiliano Sala and his pilot that disappeared over the English Channel have been found on a French beach, the British authorities said on Wednesday.

The cushions were discovered by the French authorities on Monday near Surtainville, a coastal area in northwestern France, Britain’s Air Accidents Investigation Branch said in a statement.

British investigators have identified a search area of approximately four square miles based on the plane’s path and last known radar position. A specialist vessel will search the seabed for the wreckage at the end of this week, weather permitting, the statement added.

“We are aware that a privately operated search is also being conducted in the area, and we are liaising closely with those involved to maximize the chance of locating any wreckage and ensure a safe search operation,” the statement said.

Mr. Sala, a 28-year-old forward, had recently been transferred to the Premier League club Cardiff City after emerging as a prolific goal scorer for Nantes, in the French league. The plane carrying him and the pilot, David Ibbotson, disappeared en route to Cardiff on the night of Jan. 21; Mr. Sala was scheduled to practice with the Welsh team for the first time the next day.

An underwater search conducted by a high-tech submarine is scheduled to start at the end of the week, in what will be a privately led attempt to find the Piper Malibu plane, a single-engine, propeller-driven aircraft.

The initiative to start the private operation was made by Mr. Sala’s family, after the authorities decided end the search on Thursday.

But people from all over the world have chipped in to help support of the family’s search for answers about what happened. Sport Cover, a Paris-based soccer agency, started a GoFundMe page on Friday that by Wednesday evening had raised more than 369,000 euros, about $422,000, to aid the search.

The page has attracted a significant amount of attention, including donations by soccer stars like Kylian Mbappé, a member of the French national team that won the World Cup last year, and Ilkay Gündogan, a German player with Manchester City in the Premier League.

Cardiff City paid tribute to Mr. Sala on Tuesday, at its first match since he disappeared, against Arsenal in London. Players and staff wore daffodils in his honor, and his name was included in the team roster in the match-day program. Both Cardiff and Arsenal, which won the match, laid floral tributes to Mr. Sala at Emirates Stadium.

At several English Premier League matches this week, the teams observed a moment of silence in memory of Mr. Sala.

“It is very difficult to even describe how the players are feeling,” Sol Bamba, a Cardiff defender, told BBC Sport Wales.

“We have all been affected by it — the lads, the city, the whole club.”

News reports have questioned whether Mr. Ibbotson should have been piloting the plane. He held a private pilot’s license in the United States, and his medical certification was up to date, according to records on the Federal Aviation Administration’s website.

But to fly the plane in Britain with a paying passenger, Mr. Ibbotson needed a commercial pilot’s license, and to fly at night, he needed a so-called instrument rating. Britain’s Civil Aviation Authority would not comment on Mr. Ibbotson’s credentials, but the authorities said the investigation into the plane’s disappearance would cover personnel records.

The flight went through rough, wintry weather over the Channel, and Mr. Sala left a voice message for friends and relatives saying that he was afraid that the plane would break apart.

“This would not have posed a problem for a pilot with a current instrument rating, but difficult for a pilot without one,” David Learmount, a former flight instructor, said in an email.

Shortly before the plane vanished from radar, Mr. Ibbotson requested and received permission from air traffic control to descend to 2,500 feet, possibly to go under the worst of the weather, or to avoid icing, which can cause a plane to crash.

Willie McKay, Mr. Sala’s agent has told the BBC that he was involved in selecting the plane or the pilot and that he did not own the plane that flew Mr. Sala. He said the flight was organized through a man named David Henderson, “who has flown us and many of our players all over Europe on countless occasions.”