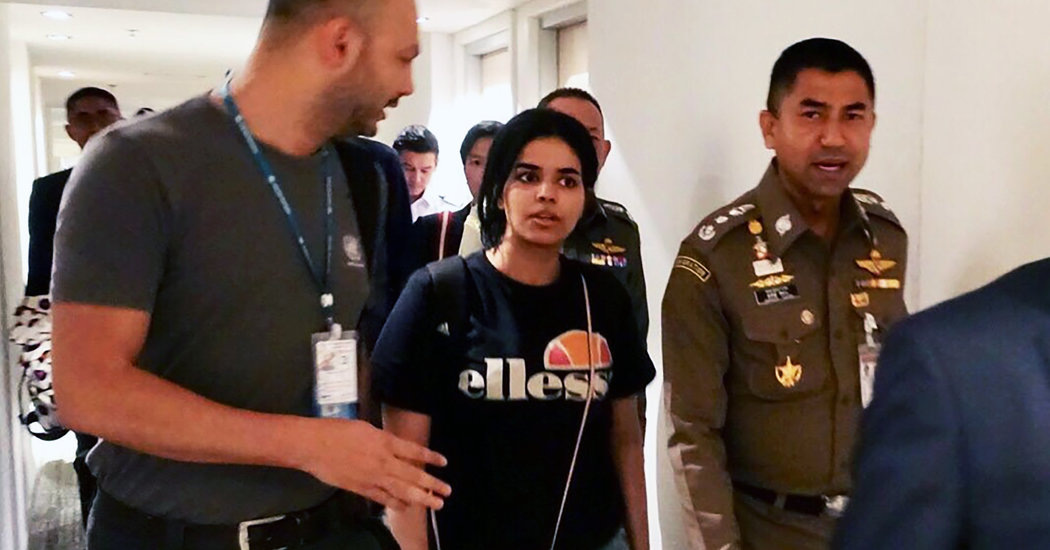 BANGKOK — A young Saudi woman who barricaded herself in a Bangkok airport hotel room to avoid deportation was granted refugee status Wednesday by the United Nations refugee agency, Australian officials said, clearing the way for an asylum request.

The woman, Rahaf Mohammed Alqunun, 18, had said she feared her relatives would kill her if she was forced to return to them. She escaped from her family in Kuwait on Saturday by boarding a flight to Bangkok, intending to fly from there to Australia and apply for asylum. But Thai immigration officials blocked her from entering the country and threatened to deport her.

After a tense 48-hour standoff that was followed around the world on social media, the Thai Immigration Bureau agreed to let her leave the airport under the protection of the United Nations agency, also known as UNHCR.

Now that the agency has granted her refugee status, the next step will be to find a country that will agree to take her in on an urgent basis. Australia’s Department of Home Affairs said on Wednesday that the United Nations had referred Ms. Alqunun’s case to Australia for refugee settlement.

“Amazingly, Rahaf’s original hope may come true after all now that Canberra confirmed the U.N. has determined her to be a refugee and referred her to Australia for resettlement,” said Phil Robertson, the deputy Asia director for Human Rights Watch and a prime advocate for Ms. Alqunun. “Just two days ago, she was barricaded in a hotel room fighting for her life, and now we see this wonderful and astonishing turn of events.”

“What’s important is to get her safe, so Australia really needs to move quickly to get her out of here,” he added.

Thai media reported on Tuesday that her father had arrived in Bangkok, where he met with refugee agency officials, but that Ms. Alqunun refused to see him.

Officials from the United Nations refugee agency could not be reached for comment. They said earlier that they could not discuss individual cases.