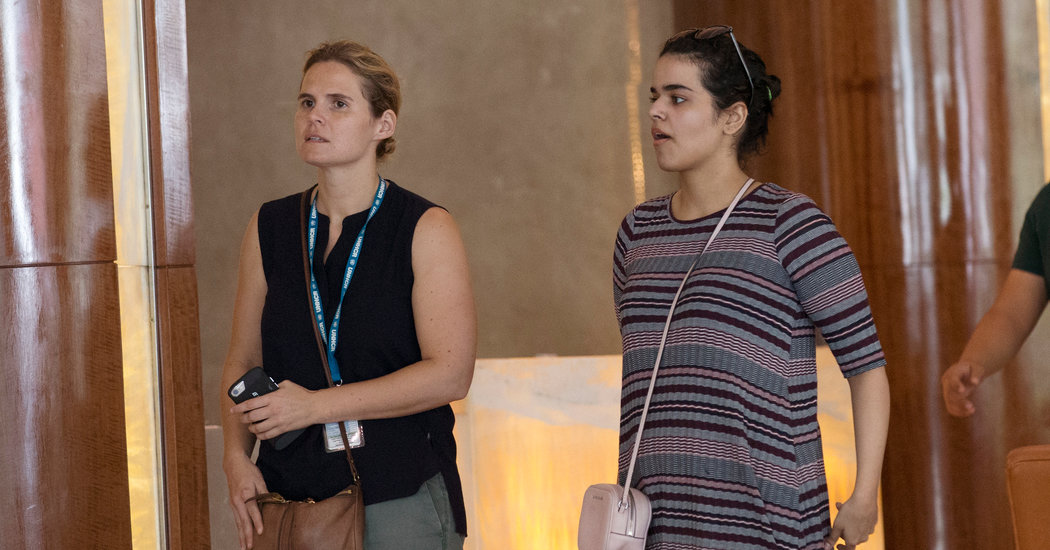 BANGKOK — Canada granted asylum on Friday to an 18-year-old Saudi runaway who feared death from her family if she were deported home from Thailand, and Thai officials said she had left “smiling and healthy” for a new life.

The woman, Rahaf Mohammed Alqunun, boarded a plane to Seoul late Friday evening and from there was scheduled to fly to Toronto, said the Thai immigration chief, Surachate Hakparn, a police general.

He said Canada had given asylum to Ms. Alqunun, which was confirmed a few hours later by Prime Minister Justin Trudeau of Canada.

Mr. Trudeau told reporters in Regina, Saskatchewan, , that the United Nations refugee agency had asked the Canadian government to grant Ms. Alqunun asylum, “and we have accepted the U.N.’s request.”

The events signaled a remarkable reversal in Ms. Alqunun’s fortunes from less than a week ago when she barricaded herself in a Bangkok airport hotel room to avoid being sent back.

“She’s lively, she’s smiling and healthy,” General Surachate told reporters at a late-night airport news conference. “She said that as soon as she arrives in Canada, one of the first things she wants to do is learn the language. She has determination.”

She escaped from her family in Kuwait last Saturday and flew to Thailand. After being denied entry into the country, she rallied support on Twitter to avoid being deported, saying she feared her relatives might kill her if she were returned to them.

The 48-hour standoff at Suvarnabhumi Airport drew global attention through a social media campaign mounted by Ms. Alqunun from the hotel room, as well as by friends and supporters.

Ms. Alqunun’s original destination had been Australia, where she hoped to join other women who have fled Saudi Arabia, a patriarchal society where male family members can control even the smallest details of a woman’s life.

Both Canada and Australia interviewed Ms. Alqunun as part of the refugee placement process, she said. The final decision on where to send her was up to the United Nations refugee agency, which granted her refugee status earlier in the week.

But General Surachate said she preferred Canada over Australia for personal reasons.

“She wishes to go to Canada,” he said, “so we respect her wishes.”

Both Thailand and Canada were commended for their handling of the case by Filippo Grandi, the top refugee official at the United Nations.

“Refugee protection today is often under threat and cannot always be assured, but in this instance international refugee law and overriding values of humanity have prevailed,” he said in a statement.

Canada’s decision is likely to aggravate already tense relations with Saudi Arabia. In August the kingdom expelled the Canadian ambassador to Riyadh, recalled the Saudi ambassador to Ottawa and froze all new trade and investment deals with Canada after Canada’s Foreign Ministry posted two Twitter messages calling on Saudi Arabia to release imprisoned rights activists, including two who have family in Canada.

The kingdom also retaliated against Canada with a series of other measures that included suspending flights by Saudia, the national carrier, to Canadian airports, and ordering the transfer of thousands of Saudi students studying in Canada elsewhere.

Ms. Alqunun’s case received unusually quick consideration by the Thai authorities, the United Nations refugee agency, also known as UNHCR, and Canadian and Australian officials. Many asylum seekers wait years for placement in a country once they are accepted as refugees by the United Nations agency.

After Thai officials agreed on Monday to let Ms. Alqunun leave the airport, they were eager to have her case settled quickly so that she could depart for whatever country agreed to accept her.

Complicating matters, her father and brother arrived in Bangkok on Tuesday. In Saudi Arabia, women are not allowed to travel without a male guardian.

The father met with immigration and refugee agency officials to make the case that Ms. Alqunun should be returned to him. He argued that she needed medical treatment and should be under his family’s care. Ms. Alqunun refused to see them.

She said earlier in an interview that her brother had often beaten her, and that her family once locked her in a room for six months because she cut her hair in a way they didn’t like.

The immigration chief, General Surachate, met with the father, whom he declined to name but identified as a provincial governor in Saudi Arabia. He told reporters that Ms. Alqunun’s father had denied abusing her.

“Her father said that his daughter might have felt neglected because he has 10 children,” the immigration chief said. “Of course, it’s normal that parents worry about their child. But since the daughter asked to be under the care of UNHCR, we have to respect her request.”

Ms. Alqunun’s father and brother asked to see her before her departure but she refused to meet with them, the general said. They also were scheduled to leave Friday evening.

“This matter, therefore, ends for Thailand,” he said. “This issue is not about international relations. This is about a family affair.”

After she arrives in Canada, she will be under the care of the International Organization for Migration.

Thailand has moved more slowly in the case of Hakeem al-Araibi, a star soccer player from Bahrain who spoke out against a powerful official there and later fled the country. He was accepted as a refugee and granted asylum in Australia.

But in November, Mr. Araibi was arrested in Bangkok on a warrant from Bahrain when he arrived to go on his honeymoon. He has been detained since then and is fighting extradition to Bahrain. He fears that he would be tortured if he were returned.

Thailand has rejected calls from rights advocates and requests from the Australian government to free him. General Surachate has said Thailand cannot release him from detention because the arrest warrant has landed him in court, unlike Ms. Alqunun.

“She isn’t a suspect so she can travel anywhere in the world,” he said.

In a post on Twitter, Ms. Alqunun called for Mr. Araibi’s release and his return to Australia. Later, friends posted that Ms. Alqunun had closed her Twitter account because she was receiving death threats.