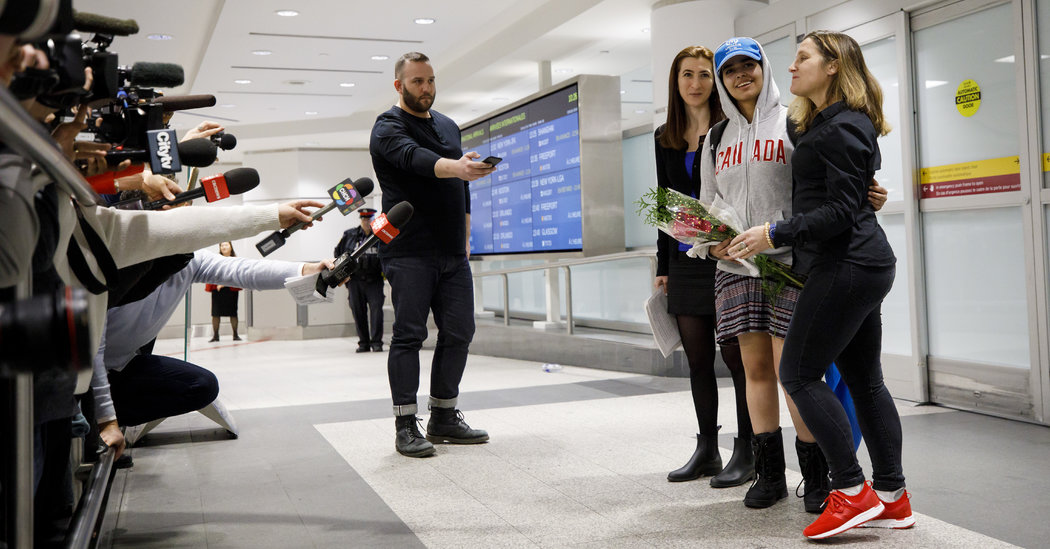 TORONTO — It was another proud moment for Canada: a Saudi teenager who had just been granted asylum walking through the arrivals gate at Toronto airport embraced by the country’s popular foreign minister.

Wearing a gray sweatshirt emblazoned with the word “Canada,” 18-year-old Rahaf Mohammed Alqunun smiled at the throng of cameras that greeted her. But she left it to Foreign Minister Chrystia Freeland to do the talking.

The minister presented her as a “very brave new Canadian,” adding that the young woman — who spent the last week in a Bangkok airport hotel lobbying for her freedom — was tired and just wanted to “go to her new home.”

“Where we can save a single person, where we can save a single woman, that is a good thing to do,” said Ms. Freeland, who refused to answer repeated questions about how this decision will affect Canada’s already strained relationship with Saudi Arabia. “And I’d like to also emphasize, this is part of a broader Canadian policy of supporting women and girls in Canada and around the world.”

The Saudi teenager became a social media sensation and cause celébrè for women’s and refugee rights after fleeing her family during a holiday in Kuwait to seek asylum.

She described her life in an interview with The New York Times as one of unrelenting abuse at the hands of her family, who live in the city of Hail, in northern Saudi Arabia. She said she was once locked in a room for six months because she had cut her hair in a way that her family did not approve of and that her family members used to beat her, particularly her brother.

Two years ago, after an unsuccessful suicide attempt, her family did not seek help for her, she said. It was then she started planning her escape. Her chance for freedom came last week, when her family took a trip to Kuwait, which does not have the same restrictions on women.

But once she arrived in Bangkok last Saturday, planning to travel on to Australia, she said her passport was confiscated and Thai officials threatened to return her to her family. Her brother and father arrived in Bangkok, demanding that she return with them.

Instead, she barricaded herself in a Thai airport hotel, opened a Twitter account and mounted a social media campaign for her asylum.

“I’m in real danger because the Saudi embassy trying to forcing me to go back to Saudi Arabia, while I’m at the airport waiting for my second flight,” she wrote in one post in English. In another post, she said: “They will kill me because I fled and because I announced my atheism. They wanted me to pray and to wear a veil, and I didn’t want to.”

After Thai officials relented, and the United Nations declared her a refugee, the Canadian government agreed to grant her asylum. This further cemented the country’s status as a bastion of refuge in a world where Western nations have become increasingly hostile to refugees.

Prime Minister Justin Trudeau on Friday said his government was “pleased” to provide safe haven for Ms. Alqunun “because Canada is a country that understands how important it is to stand up for human rights, to stand up for women’s rights around the world.”

While praise for Canada poured in, human rights groups criticized Australia — which had been Ms. Alqunun’s original destination — for dragging its feet on her file.

At a press conference two days ago in Bangkok, Australian Foreign Minister Marise Payne said her government was going through the procedural steps to assess Ms. Alqunun as a refugee.

“Why did Rahaf go to Canada instead of her preferred choice of Australia where she had friends?” Human Rights Watch executive director Kenneth Roth said in a tweet. “Because she needed safety from her Saudi pursuers fast, and Canada expedited her case while Australia (under Home Affairs Minister Peter Dutton) slow-walked it.”

Locally, there is concern about whether the move will further damage Canada’s already frayed relationship with Saudi Arabia. In August, the kingdom expelled the Canadian ambassador to Riyadh, recalled the Saudi ambassador to Ottawa and froze all new trade and investment deals with Canada after Ms. Freeland’s ministry posted two Twitter messages calling on Saudi Arabia to release imprisoned rights activists, including two who have family in Canada.

“It’s not going to help for sure,” said former Canadian Ambassador to Saudi Arabia Dennis Horak in a radio interview with the Canadian Broadcasting Corporation.“This will be seen as probably just another example of our interference in Saudi’s internal affairs.”

Attempts to reach the Saudi Embassy in Canada failed. The kingdom also retaliated against Canada last summer with a series of other measures that included suspending flights by national airline Saudia to Canadian airports and ordering the transfer of thousands of Saudi students studying in Canada elsewhere.

Over the next months, Ms. Alqunun will be able to access Canada’s generous immigration programs, including free language classes, monthly checks for food, and help finding and furnishing a home. But first, she will have to get used to the Canadian winters.

“I told her it does get warmer,” Ms. Freeland said.