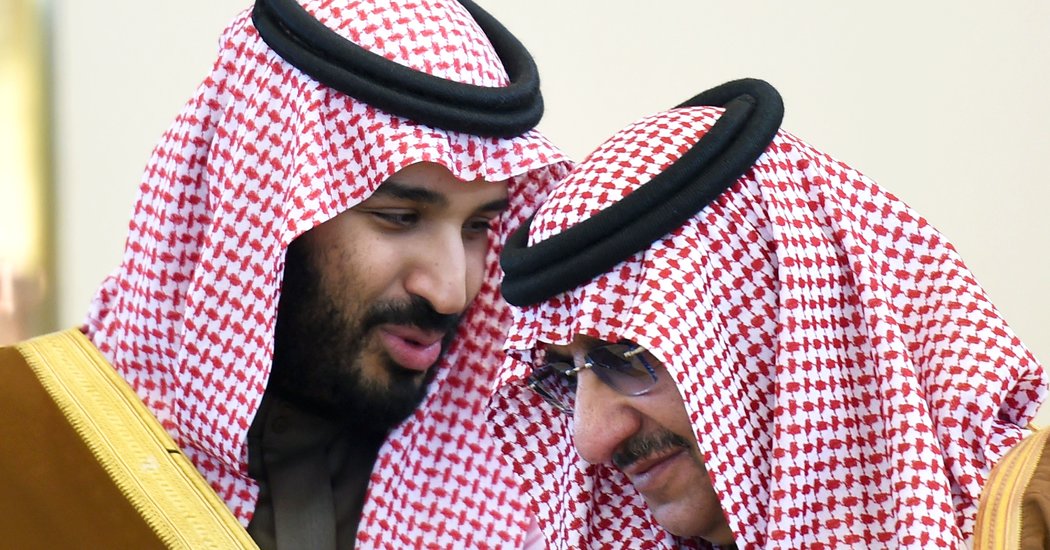 In a fresh episode of Saudi palace intrigue, Crown Prince Mohammed bin Salman has detained three members of the royal family, including a brother of the king and a former crown prince who had been potential obstacles to his power.

The detentions were the latest demonstration of the crown prince’s willingness to take extraordinary measures to quash any perceived rival.

Crown Prince Mohammed first demonstrated his iron grip on the kingdom in 2017 by locking up hundreds of royal relatives and wealthy Saudi businessmen in a Ritz-Carlton hotel.

The next year he gained international notoriety by presiding over the killing of the journalist Jamal Khashoggi inside the Saudi Consulate in Istanbul — an assassination that American intelligence agencies believe the prince ordered.

And he has refused to back down from a five-year-long military intervention in Yemen that has mired the Saudis in a bloody stalemate and produced a humanitarian disaster.

The detentions come at a time when fears about the impact of the coronavirus have slashed the price of oil, the main source of the kingdom’s revenue, and the crown prince’s celebrated plans to diversify the Saudi economy have fallen behind his promises.

The detentions were not announced by the Saudi government, and it remains unclear what prompted them. An official at the Saudi Embassy in Washington declined to comment.

They were disclosed Friday by a member of the royal family and a person close to the clan. Both spoke on condition of anonymity because of the danger of speaking out publicly about the crown prince.

The most senior royal detained was Prince Ahmed bin Abdulaziz, the younger brother of King Salman, who for a time had been the great hope of family members and other critics who wished to block Crown Prince Mohammed, 34, from taking the throne.

The former crown prince who was arrested, Mohammed bin Nayef, is also a former interior minister and longtime American favorite. He had developed close ties to American intelligence agencies during years of work together while he was interior minister. He was ousted from both of those roles by the current crown prince in 2017 and he has effectively been under house arrest since then.

The crown prince, who acts as the kingdom’s de facto ruler on behalf of his aging father, King Salman, has recently faced grumbling within the kingdom and the broader Muslim world over his unilateral decision to halt visits to Mecca in response to the coronavirus — a move with few, if any, precedents in Islamic history.

Conservatives griped that even as he halted pilgrimages, modern entertainment venues the crown prince brought into the kingdom, like movie theaters, remained open.

One possible motive for the detentions may have to do with the aging of Prince Mohammed’s father, King Salman, 84. The crown prince could be seeking to lock down potential challengers to his own succession before his father dies or abdicates the throne.

None of the princes he detained, however, had given any indication that they intended to challenge Crown Prince Mohammed.

Prince Ahmed is a figure of special gravitas in the family because he is King Salman’s only surviving full brother. Both are sons of the kingdom’s modern founder, and succession had previously passed from brother to brother, until King Salman elevated his own son to crown prince in 2017.

Critics of Crown Prince Mohammed adopted Prince Ahmed as a hero after he appeared to criticize the kingdom’s current policies during an encounter with protesters in London in 2018.

The protesters were chanting against the Saudi-led war in Yemen, and Prince Ahmed tried to distance the rest of the royal family from responsibility.

“What does this have to do with the Saud?” Prince Ahmed said, naming the royal family in comments caught on video. “Those responsible are the king and his crown prince.”

Disgruntled Saudis began posting pledges of allegiance to Prince Ahmed on the internet. But he quickly made clear he had no intention to turn on the crown prince, issuing a statement saying that his comments had been misinterpreted.

He returned to the kingdom later that fall, embraced Crown Prince Mohammed at the airport, and appeared to have maintained warm relations with his nephew since.

Unlike some other members of the royal family whom Crown Prince Mohammed suspects of disloyalty, Prince Ahmed had been allowed to come and go freely from the kingdom. He returned Wednesday from a trip abroad for falconry — a popular pastime among Persian Gulf royals — and he was arrested on Friday, according to the person close to the family.

His closeness with Washington was also perceived as an asset within the royal family.

But Crown Prince Mohammed bin Salman not only ousted but also humiliated his predecessor in 2017. Aides to the current crown prince physically forced his predecessor to relinquish his roles, detaining him for a prolonged period and depriving him of needed medicines.

Then aides to Crown Prince Mohammed froze Prince Mohammed bin Nayef’s assets, banned him from travel and started a social media campaign charging that he had become addicted to pain killers and other drugs.

Stripped of his power and freedom of movement, Prince Mohammed bin Nayef also appeared to have largely acquiesced to his successor’s grip on the kingdom.

A person familiar with his arrest said that on Friday morning armed men in black uniforms and face masks had appeared at Prince Mohammed bin Nayef’s desert camp outside Riyadh, a place where he often used to meet with visiting American officials. They took away the prince and his younger brother, searched the property, and cut off all lines communications from the camp.

The accusation against him was treason, according to the person familiar with the arrest.

Detaining family members suspected of disloyalty has become a trademark of Crown Prince Mohammed. His detention of hundreds of powerful businessmen and royal family members in 2017 at the Ritz-Carlton in Riyadh was portrayed as a crackdown on corruption. Critics called it a consolidation of power and a shakedown.

Associates of many of those detained said they were subjected to torture and physical abuse, then coerced into turning over billions of dollars in private wealth in exchange for their release.

Since the killing of Mr. Khashoggi, though, many supporters of Crown Prince Mohammed argued that the debacle had taught him to restrain his aggressive impulses.

The Saudis familiar with the arrests said Friday that it was unclear where the new detainees were being held, if they might face criminal charges, or if they might soon be released.