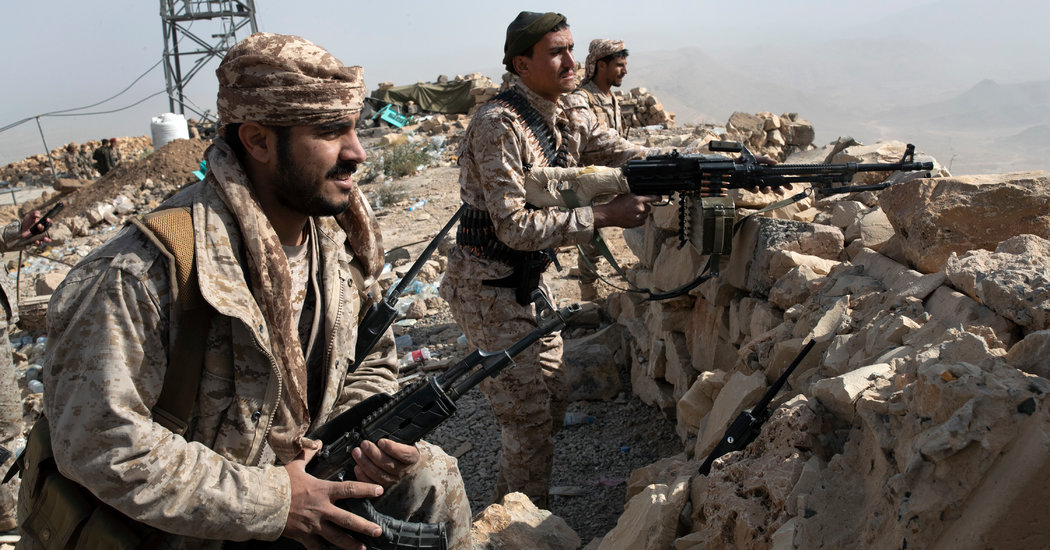 BEIRUT, Lebanon — Saudi Arabia on Wednesday announced that the kingdom and its allies would observe a unilateral cease-fire in the war in Yemen starting at noon on Thursday, a move that could pave the way for ending the brutal five-year-old conflict.

Saudi officials said the cease-fire sought to jump-start peace talks brokered by the United Nations and had been motivated by fears of the coronavirus spreading in Yemen, the poorest country in the Arab world, where the health care system has been ravaged by years of blockade and conflict.

The gesture is the first by any government entangled in an international armed conflict to halt hostilities at least in part because of the coronavirus pandemic, which has traumatized the world. The leader of the United Nations, Secretary General António Guterres, pleaded for a worldwide humanitarian cease-fire two weeks ago because of the pandemic.

While Yemen is one of the few countries in the world yet to have a confirmed case of Covid-19, the disease caused by the virus, aid workers fear that an outbreak there would be devastating for the war-torn country. Saudi Arabia itself has struggled to stop the virus from spreading, including inside its own sprawling royal family.

The cease-fire, the Saudi officials said, would last for two weeks and include Saudi Arabia’s Arab allies and the internationally recognized Yemeni government, which was effectively toppled in 2014 when a rebel group aligned with Iran and known as the Houthis took over much of the country’s northwest and its capital, Sana.

Saudi Arabia and its allies have been fighting since March 2015 to push the Houthis back and restore the Yemeni government — with little success.

The Houthis were not consulted before the cease-fire was announced, Saudi officials said, speaking on condition that they not be identified by name, and the kingdom reserved the right to respond if the Houthis fired missiles into Saudi territory.

But shortly before the Saudi announcement, a senior Houthi official, Mohammed Ali al-Houthi, posted a detailed, eight-page plan to end the war on his Twitter account, raising questions about whether the warring parties were competing to appear more interested in peace than their enemies.

When asked why the Saudis would suddenly, after five years of war, propose a nationwide cease-fire, Elana DeLozier, a research fellow at the Washington Institute for Near East Policy who studies Yemen, attributed it to the pandemic.

She called the Saudi announcement “the biggest concession and the biggest confidence-building measure that the Saudis have given since the beginning of the war.”

And the Saudis appeared to be using it as a way to gauge the Houthis’ willingness to negotiate.

“It really is a test case,” she said.

That meant that the cease-fire’s immediate success will largely depend on compliance by the Houthis, whose leaders did not immediately respond to the Saudi announcement.

Their forces have been making gains against Saudi-backed Yemeni forces in recent months, which may make them hesitant to give concessions. But they could see benefits to engaging in a peace process, if they feel that it recognizes the power they have gained during the war.

Saudi officials said the Yemeni government, most of whose officials live in Riyadh at the kingdom’s expense, had agreed to the cease-fire as well, but no Yemeni officials were on a telephone conference call with journalists to announce the cease-fire.

After the cease-fire was announced, Khalid bin Salman, Saudi Arabia’s deputy defense minister, wrote on Twitter that the kingdom would give the United Nations $500 million for humanitarian work in Yemen and $25 million to fight the coronavirus.

Despite the cease-fire’s tenuousness, Martin Griffiths, the United Nations special envoy to Yemen, hailed the announcement in a statement, saying it should create a fertile environment for peace talks.

“The parties must now utilize this opportunity and cease immediately all hostilities with the utmost urgency, and make progress towards comprehensive and sustainable peace,” Mr. Griffiths said.

Even before the coronavirus pandemic, the United Nations described Yemen as the world’s worst man-made humanitarian disaster. A large majority of the country’s 28 million people face hunger, disease and other deprivations.