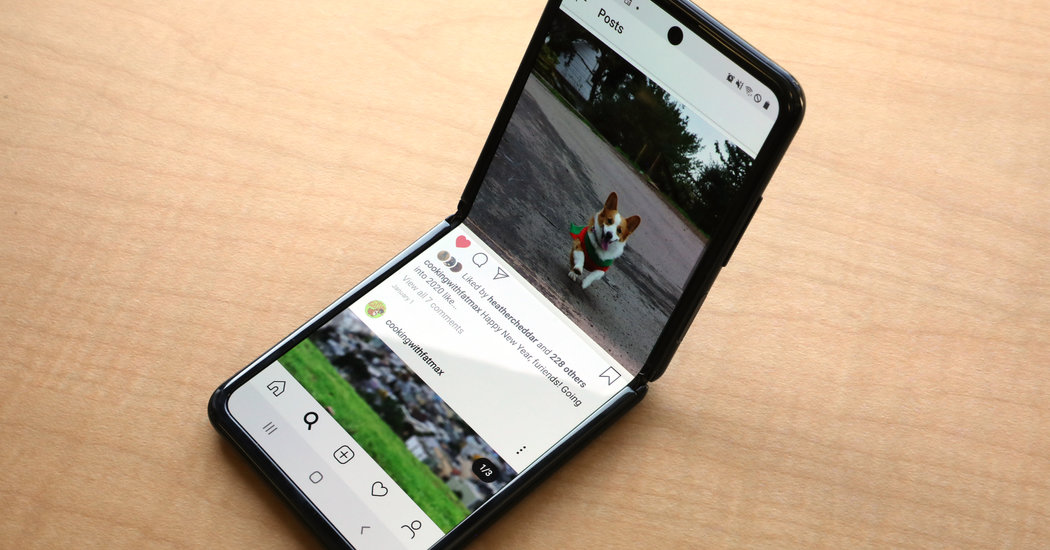 Before I say how much I disliked this Samsung phone, let me let you in on a secret about tech product reviews: As gadgets have increased in speed, abilities and price over the last few years, tech companies have given product reviewers like me less time to test them.

When the companies provide us early access to their gadgets, they set a date and time for when reviewers can publish their verdicts before the products are released. More than a decade ago, we got two weeks, which felt like an ideal amount of time to properly explore a device’s pros and cons.

Today, we get about a week at most to try out and write about products like iPhones, Microsoft computers and Google Pixels. Samsung was even stingier: It allowed reviewers to test its new Galaxy Z Flip, a $1,380 smartphone with a foldable screen that debuted in mid-February, for only 24 hours.

This minimized review period screams “Buyer, beware” — especially since some Samsung products have had issues with durability and safety. Last year, early samples of Samsung’s first foldable gadget, the Galaxy Fold, which cost nearly $2,000, broke in reviewers’ hands within days. In 2016, the company also canceled its Galaxy Note 7 because a design flaw made it prone to explode.

A Samsung spokeswoman declined to comment on this review.

Smartphones — especially this Samsung foldable — cost a lot of money and are important tools in our lives. So, even though my review would appear later than others, I took the slow approach to reviewing it: I bought a Z Flip and used it exclusively for two weeks as my personal phone to see what it was like to truly live with it.

The verdict: I found the foldable impractical to use and paid a $45 restocking fee to return it. Here’s why.

Samsung’s new phone functions somewhat like clamshell phones that predated the smartphone era. Folded up, the Z Flip resembles a compact makeup mirror, with a tiny screen on the outer shell that shows the time and app notifications. Unfolded, it reveals a screen that measures 6.7 inches diagonally. In order to fold, the device relies on a mechanical hinge and a flexible glass panel.

The main benefit of this design: It takes up less room in your pocket while providing all the features of a normal smartphone.

On paper, the Z Flip sounds like a winning concept. But in execution, it’s flawed.

As the former owner of an original Motorola Razr, the iconic flip phone from the mid-2000s, I’m accustomed to the flipping concept. It felt cool to quickly flip open the phone to answer a call and then shut it to hang up.

But the Z Flip failed to conjure the Razr’s coolness. A warning label advises users not to press the screen too hard or place the device next to coins or house keys.

In other words, it is so delicate that you will want to carefully open it with two hands to answer a call, not with a smooth one-handed gesture, as with the old clamshell phones.

Over two weeks, constantly having to unfold and fold up this phone got tedious and frustrating. That’s because getting the phone going requires a multistep process: After unfolding the device, you scan a fingerprint or your face to unlock it. The fingerprint scanner, which lives on a tiny button on the side of the phone, often failed to scan my print, and the face scanner sometimes could not see my face in dim rooms.

One streamlining alternative is to skip using biometrics or a passcode, but we all know that’s a bad idea.

Last but not least, with the screen unfolded, there was a visible crease in the middle of it. It’s an eyesore and unpleasant to swipe on when scrolling through an app.

On the outer shell of the Z Flip is a tiny screen that primarily shows the time. Swiping right on it lets you see miniature app alerts, like text message notifications. While I liked the overall aesthetic of the device folded up, I missed text messages because the screen was too small to tell me much.

For the sake of being polite in public, I normally mute my phone from ringing and making text sounds; I rely on screen notifications and vibrations. With the Z Flip closed up and by default showing the clock, I often didn’t notice when I had received a text. There were some days when I swiped on the tiny screen and noticed that I had received texts hours earlier from my wife or my editor. Whoops.

Then there’s the pocketability factor, which is supposed to be the most important benefit of the device. Folded up, it was about 1.5 times thicker than a normal smartphone. So even though it was shorter inside a pocket, it felt bulky.

In my experience, the Z Flip’s short and stubby design was more comfortable inside square coat pockets but added unflattering bulk to pants pockets.

Everything else is just OK.

Let’s run through the rest of the basics: the camera, the battery, phone calls and durability:

So who needs it?

I usually say brand-new tech concepts like the Z Flip are for people who are extremely excited about tech and want to live on the bleeding edge. But because of the phone’s many compromises, it is impractical even for gear heads.

Samsung has marketed the Z Flip as “a standout device for those who live to stand out” — in other words, a smartphone that looks so different that it will get people’s attention. So I put this premise to the test by going to several bars in San Francisco, a haven for tech enthusiasts, and conspicuously flipping open and folding up the phone in between sipping cocktails and munching on snacks.

Not a single person noticed or commented on my nonconformist Z Flip. (I got a lot more attention in high school when I dyed my hair blue.)

The only person who remarked on the phone was my customer service representative at Best Buy. Taking a look to inspect the device before accepting my return, she pronounced it to be a “weird phone.”