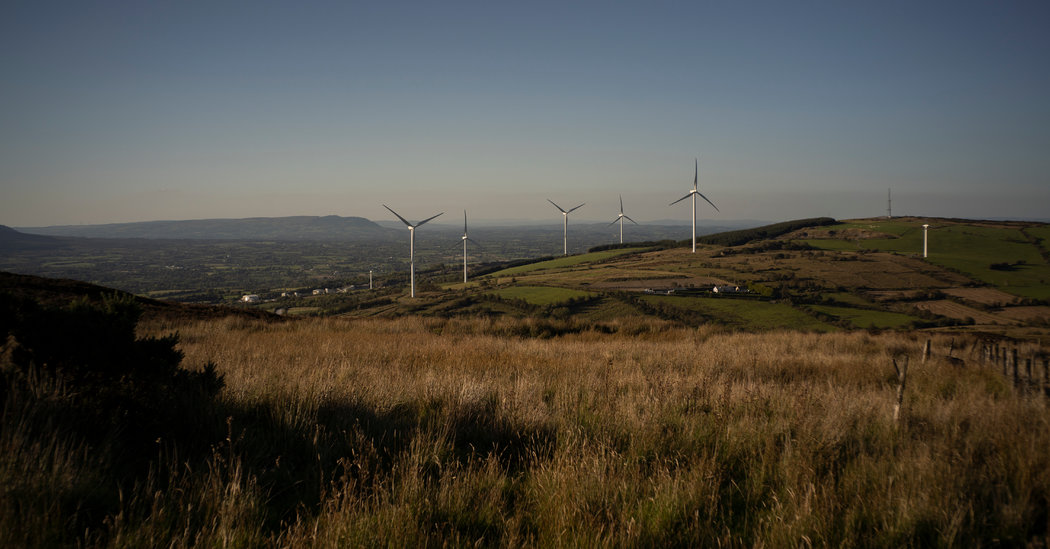 DERRYLIN, Northern Ireland — Kevin Lunney, a 50-year-old businessman from Northern Ireland, was heading home one evening when he became the victim of a prolonged, sadistic and ostentatious assault. Abducted by four masked men, he was driven across the nearby border with the Republic of Ireland, locked in a horse trailer and beaten and tortured for two hours.

One leg was broken in two places with a heavy implement, several fingernails were pulled out and the initials of his employer, Quinn Industrial Holdings, were carved into his chest with a knife. He was then doused with bleach, apparently to destroy forensic evidence, before being dumped on the side of a quiet country road.

The Irish borderlands have a history of murder and intimidation, and Ireland’s deputy prime minister, Simon Coveney, likened the attack to the “gangland, paramilitary-style, punishment beatings” that were a feature of Northern Ireland’s 30 years of Troubles.

For some, the assault conjured a vision of a grim future along the border, in the event that Britain leaves the European Union without an agreement.

For now, people can cross the border freely and without any need for checks. A so-called no-deal Brexit would be likely to change that: Northern Ireland is a part of the United Kingdom, while the Republic of Ireland will continue to be a European Union member state, implying a need for a harder frontier. That new division, many fear, could create ideal conditions for smuggling, and potentially provoke a resurgence of paramilitary intimidation and violence.

Yet the attack on Mr. Lunney appears to have had nothing to do with politics or religion. Instead, this assault was just the most ghastly of dozens of incidents in an eight-year campaign of unpunished arson, vandalism, death threats and assaults against the management of Quinn Industrial, also called the Quinn Group or simply Quinn. The violence has brought into question the ability of Dublin and London to enforce the law on their common border.

At the heart of the matter is the ownership and management of Quinn Industrial, the region’s biggest industrial employer, which straddles the border between Derrylin in Northern Ireland and Ballyconnell in the south.

Mr. Lunney, the operations director at Quinn, was part of a mainly local management team that rescued the business and its 830 jobs with financial backing from the United States after the group’s flamboyant self-made founder, Sean Quinn, went bankrupt in 2011.

Once Ireland’s richest man, Mr. Quinn had leveraged a successful construction business into a global insurance, hotel, health care and real estate empire worth an estimated $6 billion in 2008.

The business investment and thousands of jobs that Mr. Quinn brought to the impoverished rural counties of Fermanagh and Cavan made him a local hero.

But in 2011, Mr. Quinn lost his fortune after investing heavily in shares of Ireland’s now-notorious Anglo-Irish Bank, which was itself about to go broke because of reckless property lending, a bank failure that saddled Ireland’s 4.9 million citizens with more than $30 billion in debt.

Since then, Mr. Quinn has encouraged the notion that he and his family got a raw deal in the liquidation. He and his sympathizers have blamed his setbacks not on his business decisions but on the machinations of Dublin’s bankers and politicians, as well as his former staff.

The attacks on Mr. Quinn’s former businesses in Cavan and Fermanagh began as his empire was being liquidated in 2011, and were accompanied by anonymous threatening messages calling for the local management, many of them his former assistants, to hand the company back to him.

At a public meeting last year, a tearful Mr. Quinn told hundreds of local supporters — some of them still employees at Q.I.H. — that he “felt stabbed in the back” by his former executives.

“All they have to do, is come along and say, ‘Sean, we got this wrong. We should not be here. There are the keys,’” Mr. Quinn told the meeting, according to a report in a local newspaper, The Anglo-Celt.

Anonymous posters, banners and social media posts have repeatedly threatened named directors, including Mr. Lunney, with “the gun” and “kangaroo justice.” In February, Mr. Lunney’s nose was broken, and boiling water was thrown in the face of a fellow executive, Dara O’Reilly, the company’s chief financial officer, as they ate lunch at a gas station at Ballyconnell.

In May, the company received an anonymous letter threatening a “permanent solution” against five named directors, including Mr. Lunney. All told, the company has recorded more than 60 incidents over eight years.

While the identity of the attackers is not known, the Irish police and the management of Quinn Industrial blame a criminal gang.

Last week a local resident who was wanted for questioning, Cyril McGuinness, died of an apparent heart attack when British police officers raided a house where he was staying in Derbyshire, England.

Irish news outlets have reported that Mr. McGuiness, 54, was a career criminal with more than 50 convictions, and that he was suspected of leading the gang that carried out the attacks on Quinn Industrial’s management. On Thursday, three more people were arrested by the police in Ireland over the case. They were released without charge early Saturday.

Mr. Quinn has repeatedly condemned the intimidation and attacks, including the assault on Mr. Lunney.

A statement released by the Quinn family said, “We have had no involvement in the Quinn Group for several years now and are deeply frustrated and angered that our former ownership of those businesses is being associated in any way with such abhorrent acts.”

In a recent rare TV interview, with Britain’s Channel 4 News, Mr. Quinn said that he had “no hand act or part, or no knowledge or no gain” in the attack on Mr. Lunney, and that it had caused him to give up his ambition to regain control of his former companies. “People can say whatever they want about me, but I don’t want to be seen to be the beneficiary of abuse or criminal activity.”

“This is your last warning to resign to the directors of Q.I.H., obviously you haven’t learned your lesson after what happened to Kevin. If we wanted we could have killed him very easily,” the statement read. “The Quinn family that employed hundreds of people were stabbed in the back and we have the capability and manpower to see this through until the end and achieve a permanent solution.”

Since the assault on Mr. Lunney, the police on both sides of the border have ramped up measures to solve the string of crimes. The Irish police force, An Garda Siochana, said that while no one had been charged at this time it had sent several files to prosecutors, and the Garda commissioner, Drew Harris, who was previously deputy chief constable of the Police Service of Northern Ireland, said he was happy with the progress being made.

Yet the fact that it has taken so many years to bring the investigation this far has raised fears that the violence could threaten further investment in a remote and underfunded region.

Quinn Industrial, sprawling across the borderlands, is particularly vulnerable.

Liam McCaffrey, the company’s chief executive, said that he felt he and his fellow managers had been too reticent in the past about speaking out against the campaign, and that the authorities in Dublin and Belfast had been slow to respond.

“It was underestimated and not taken seriously at the highest level,” he said. “There was a feeling that it was a local issue and it would just go away. What happened to Kevin has changed that. There is more effort now, but they are having to catch up.”

Any attempted prosecution will come up against a traditional code of silence in the border regions.

Shortly after the attack, Quinn Industrial organized a short march at its headquarters in support of Mr. Lunney and his family. Few of the hundreds of employees and locals who took part were willing to talk to reporters, and even fewer gave their names. Yet silence does not imply support for the attacks.

“There’s no way this is coming from workers at the company,” said Donal O’Cofaigh, a communications officer with a union representing many employees who is also a local councilor. “There’s support for Sean Quinn, there’s no doubt about that, but there’s also support for the new management.”

Mr. Lunney, along with several other senior managers at the company, still lives amid the winding, hedge-lined roads and humpbacked hills of this border region — scenic, but, as the Troubles proved time and again, perfect for ambushes.

“There’s a small number of people that need to be dealt with and they haven’t been,” said Mr. McCaffrey, the Quinn Industrial chief executive. “Some of them may have paramilitary connections but they are motivated by money, not by any political agenda. We are determined not to be intimidated but at the same time we all have families and we want to live a reasonably normal life. We’ve taken steps to protect ourselves and we’ve been in consultation with the police.”