Russia Says He’s a Spy. His Lawyer Says He Just Wanted Photos of a Cathedral. 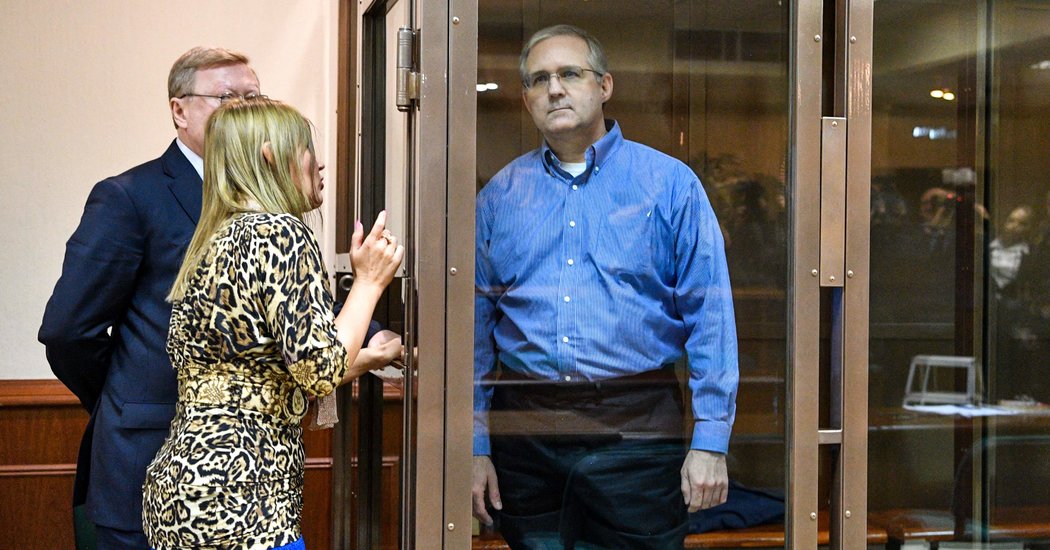 MOSCOW — A former United States Marine who was arrested in Moscow on spying charges had been handed a flash drive that he thought contained pictures of churches but was instead loaded with classified information, his lawyer said on Tuesday.

Paul N. Whelan, 48, was arrested by the Federal Security Service on Dec. 28 in an upscale Moscow hotel where he had been staying for a wedding. After his arrest, it emerged that by birth and through a patchwork of ancestors, he held citizenship from the United States, Canada, Britain and Ireland.

Mr. Whelan, who has denied the charges, was detained in his room minutes after being given a thumb drive containing a full list of names of the employees of a secret Russian security agency, according to report early this month by Rosbalt, a news agency close to the security services.

The Russian foreign minister, Sergey V. Lavrov, has described Mr. Whelan as having been “caught red-handed.”

Vladimir A. Zherebenkov, Mr. Whelan’s lawyer, said that he had been handed the secret information by another person whom he would not identify. He did not say whether Mr. Whelan knew the person, or what motive the person might have had for passing on classified material.

“Paul actually was actually meant to receive information that was not classified from an individual,” Mr. Zherebenkov told reporters before a bail hearing on Tuesday. The drive was supposed to contain pictures, he said.

“These were cultural things — a trip to a cathedral, Paul’s holiday,” he said. “But as it turned out, it contained classified information.”

Mr. Whelan had no clue what was on the drive because he was arrested before he had a chance to look at it, the lawyer said.

Mr. Whelan appeared at Moscow City Court on Tuesday, his first public appearance since his arrest. The actual session, attended by three consular officials from countries where Mr. Whelan holds citizenship, was closed to the news media.

Mr. Whelan, wearing a sky blue shirt and dark pants, was locked in a glass docket, as is the custom in Russian courts. He did not speak to reporters before they were ushered out of the room. During the hearing he spoke for about 15 minutes in his own defense, the lawyer said.

The judge denied a request for bail and ordered Mr. Whelan held in Moscow’s notorious Lefortovo Prison for another month. If convicted of espionage, he faces up to 20 years in jail.

In prison he now has an English-speaking cell mate and has been able to check out English-language books from the library by authors like Jack London, Russian prisoner advocates have said.

David Whelan, his twin brother, who lives in Canada, said in a statement that the family would not comment until it had heard more about the hearing from consular officials.

Mr. Whelan has made numerous trips to Russia over more than a decade, traveling around the country by railroad and cultivating dozens of friends through Vkontakte, a Russia social media platform akin to Facebook. Many of those friends had military backgrounds, and relatives suggested that he might have been seeking out kindred spirits, given his own long service in the Marines.

He had been given a bad conduct discharge in 2008 related to a larceny case.

From the time Mr. Whelan’s arrest was made public, there has been speculation in Russia that he was imprisoned in order to exchange him for one or more Russians held in American jails. President Vladimir V. Putin has repeatedly expressed outrage at the United States’ detentions of Russian citizens.

Mr. Whelan might have been taken, for example, to exchange him for Maria Butina, who pleaded guilty on Dec. 13 in Federal District Court in Washington to a charge of conspiring to act as a foreign agent.

Ms. Butina, 30, admitted to being involved in an organized effort, backed by Russian officials, to try to lobby influential Americans in the National Rifle Association and the Republican Party.

Mr. Whelan’s lawyer has said that an exchange was possible and he would welcome it, but that it would take some time, and would require a pardon from Mr. Putin. The shortest possible time for such a case would be six months to a year, he said, after which the issue of an exchange might be broached.

“This is a long process,” Mr. Zherebenkov told The New York Times in early January. “I myself hope that we can rescue and bring home one Russian soul.”