Robots Welcome to Take Over, as Pandemic Accelerates Automation 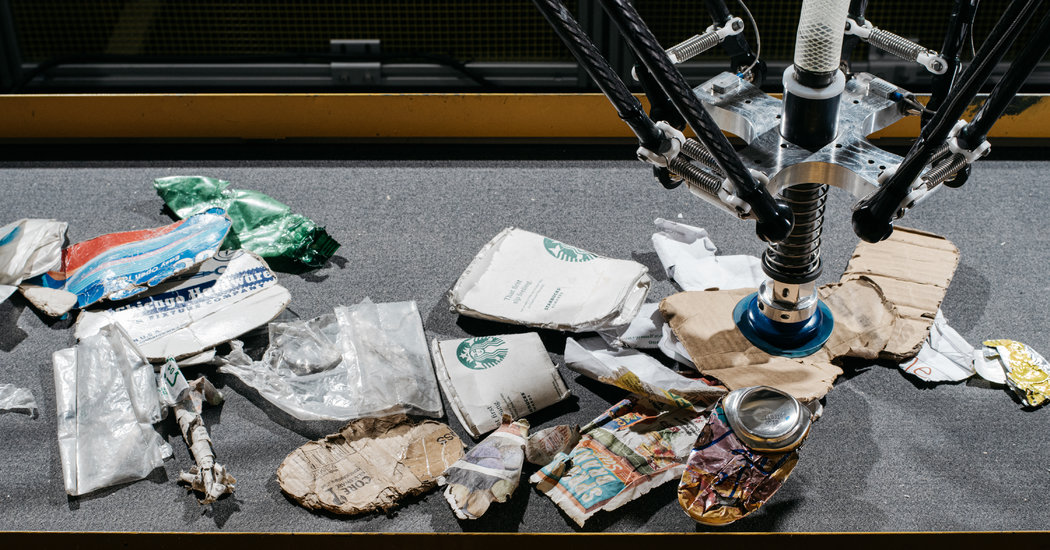 The recycling industry was already struggling before the pandemic. Now, an increasing number of cities are suspending recycling services, partly out of fear that workers might contract the coronavirus from one another while sorting through used water bottles, food containers and boxes.

One solution: Let robots do the job.

Since the coronavirus took hold in the United States last month, AMP Robotics has seen a “significant” increase in orders for its robots that use artificial intelligence to sift through recycled material, weeding out trash.

“Some facilities that were looking at getting one or two robots are now saying, ‘We need quite a bit more,’” said the Colorado company’s chief executive, Matanya Horowitz. “It’s all moving quite fast.”

Before the pandemic, automation had been gradually replacing human work in a range of jobs, from call centers to warehouses and grocery stores, as companies looked to cut labor costs and improve profit.

But labor and robotics experts say social-distancing directives, which are likely to continue in some form after the crisis subsides, could prompt more industries to accelerate their use of automation. And long-simmering worries about job losses or a broad unease about having machines control vital aspects of daily life could dissipate as society sees the benefits of restructuring workplaces in ways that minimize close human contact.

“Pre-pandemic, people might have thought we were automating too much,” said Richard Pak, a professor at Clemson University who researches the psychological factors around automation. “This event is going to push people to think what more should be automated.”

The grocery industry is leaning more on automation to free up employees to deal with the crush of demand during the pandemic.

Brain Corp, a San Diego company that makes software used in automated floor cleaners, said retailers were using the cleaners 13 percent more than they were just two months ago. The “autonomous floor care robots” are doing about 8,000 hours of daily work “that otherwise would have been done by an essential worker,” the company said.

At supermarkets like Giant Eagle, robots are freeing up employees who previously spent time taking inventory to focus on disinfecting and sanitizing surfaces and processing deliveries to keep shelves stocked.

Retailers insist the robots are augmenting the work of employees, not replacing them. But as the panic buying ebbs and sales decline in the recession that is expected to follow, companies that reassigned workers during the crisis may no longer have a need for them.

The role of a cashier is also changing. For many years, retailers have provided self-checkout kiosks. But those machines often require intervention by workers to help shoppers navigate the often fickle and frustrating technology.

The pandemic is prompting some stores to adopt even more aggressive “contactless” options. From farm stands to butchers, merchants are asking customers whenever possible to use mobile payment services like PayPal or Venmo. Banking regulators in Europe last week increased the amount of money that shoppers can pay through their mobile devices, while reducing some authentication requirements.

While fully automated stores, such as Amazon Go, might have seemed like a technological curiosity a few months ago, they are likely to become a more viable option for retailers.

“No one would probably have thought of a cashier’s job as being dangerous until now,” Mr. Pak said.

Mark Muro, a senior fellow at the Brookings Institution who studies labor markets, said that with companies hurting for cash, the pressure to replace humans with machines becomes even more intense.

A new wave of automation could also mean that when companies start hiring again, they do so in smaller numbers.

“This may be one of those situations when automation does substantially depress rehiring,” Mr. Muro said. “You may see fewer workers when the recovery does come.”

Even some conversations are being automated away. With closed offices keeping many of its workers away, PayPal has turned to chatbots, using them for a record 65 percent of message-based customer inquiries in recent weeks.

“The resources we are able to deploy through A.I. are allowing us to be more flexible with our staff and prioritize their safety and well-being,” PayPal said in a statement.

“We will temporarily start relying more on technology to help with some of the work normally done by reviewers,” the company said. “This means automated systems will start removing some content without human review.”

Recycling is one industry that may be altered permanently by the pandemic. Some workers, who earn as little as $10 an hour, have been concerned about coming to work during the crisis and some cities have been scrambling to find enough protective gear for all of their employees. Federal health officials have assured them that the risks of transmission from household refuse is low. But workers in recycling facilities often work side by side sorting material, making social distancing difficult.

At AMP Robotics, executives like Mr. Horowitz say their robots will enable recycling facilities to space out their employees, who stand at conveyor belts weeding through the used plastic and paper.

Another benefit of the bots: “They can’t get the virus,” Mr. Horowitz said.