Rising Temperatures Could Melt Most Himalayan Glaciers by 2100, Report Finds 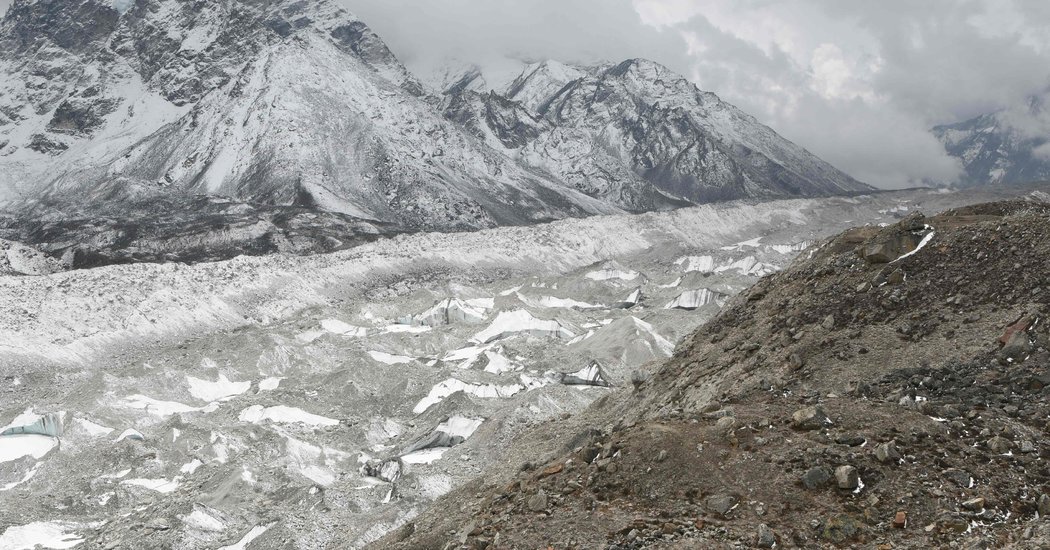 NEW DELHI — Rising temperatures in the Himalayas, home to most of the world’s tallest mountains, will melt at least one-third of the region’s glaciers by the end of the century even if the world’s most ambitious climate change targets are met, according to a report released Monday.

If global warming and greenhouse gas emissions continue at their current rates, the Himalayas could heat up by 8 degrees Fahrenheit (4.4 degrees Celsius) by 2100, according to the report, the Hindu Kush Himalaya Assessment.

Those starker numbers would translate to a loss of two-thirds of glaciers in the region, plus radical disruptions to food and water supplies, and mass population displacement.

Glaciers in the Hindu Kush Himalayan Region, which spans over 2,000 miles of Asia, provide water resources to around a quarter of the world’s population.

“This is a climate crisis you have not heard of,” said Philippus Wester, a lead author of the report. “Impacts on people in the region, already one of the world’s most fragile and hazard-prone mountain regions, will range from worsened air pollution to an increase in extreme weather events.”

One of the most complete studies on mountain warming, the Hindu Kush Himalaya Assessment was put together over five years by 210 authors. The report includes input from more than 350 researchers and policymakers from 22 countries.

In October, a landmark report from the United Nations’ scientific panel on climate change found that if greenhouse gas emissions continued at the current rate, the atmosphere would warm by as much as 2.7 degrees Fahrenheit (1.5 degrees Celsius) above preindustrial levels by 2040.

Avoiding damage from a rise this steep would require transforming the world economy at a speed and scale that has “no documented historic precedent,” the report said.

In the Himalayas, warming under this scenario would probably be even higher, at 3.8 degrees Fahrenheit (2.1 degrees Celsius), the Hindu Kush Himalaya Assessment found. Across the world, glacier volumes are projected to decline up to 90 percent this century from decreased snowfall, increased snowline elevations and longer melt seasons.

The Hindu Kush Himalaya Assessment touches on the phenomenon of elevation-dependent warming. Though it is well known that temperature changes due to increased levels of greenhouse gases are amplified at higher latitudes, like in the Arctic, there is growing evidence that warming rates are also greater at higher elevations.

“Mountain people are really getting hit hard,” said David Molden, the director general of the International Center for Integrated Mountain Development, the research center near Kathmandu, Nepal’s capital, that led the study. “We have to do something now.”

Around South Asia, the impact of climate change has already intensified. Brutal heat waves are becoming unbearable, making people sicker and poorer, and diminishing the living standards of 800 million people.

Access to water is also a concern. Last spring, shortages were so severe in the Indian city of Shimla, in the Himalayas, that some residents asked tourists to stop visiting so that they would have enough water for themselves.

A government report released last year found that India was experiencing the worst water crisis in its history. About half of India’s population, around 600 million people, faced extreme water scarcities, the report found, with 200,000 people dying each year from inadequate access to safe water.

By 2030, the country’s demand for water is likely to be twice the available supply.

“Water sources have dried up,” said Pasang Tshering Gurung, a farmer from the village of Samjong, which is about 13,000 feet above sea level.

A few years ago, all 18 families in Samjong moved to a village around 1,000 feet lower after their crops repeatedly failed.

But Mr. Gurung and his neighbors are still worried. Landslides linked to increased flooding continue to thunder down hillsides. The government has offered limited support for resettlement, he said.

And with little money to spare, Mr. Gurung is not sure where he would go next.

“We will be landless refugees,” he said. “How can we survive in the Himalayas without water?”