Review: ‘Devs’ Is a Cold and Beautiful Machine 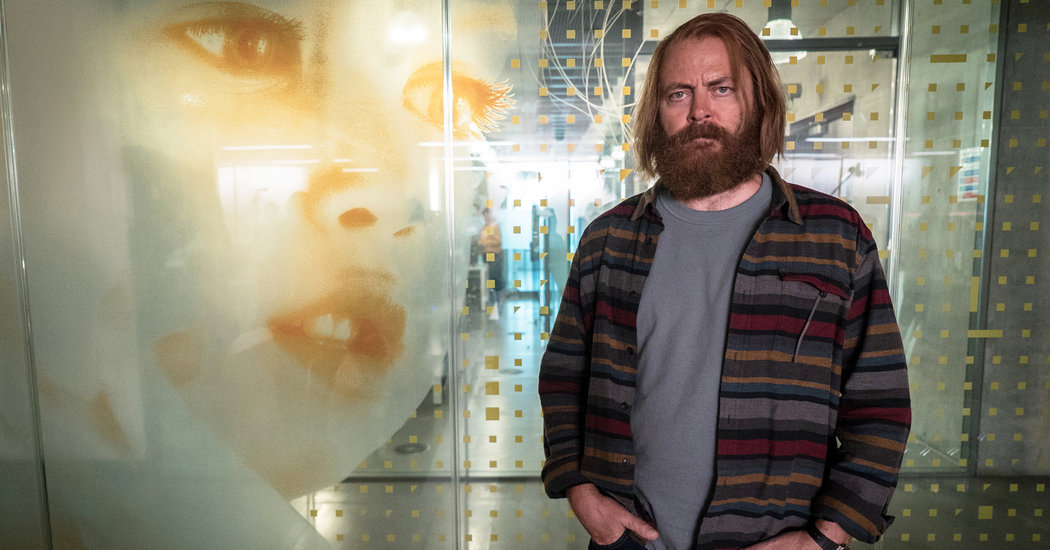 Forest (Nick Offerman) is a know-it-all. That’s not to say that he’s a polymath, or wise, or even especially well-informed. Forest is a tech mogul, and his project is building a computer that uses the principle of determinism — that everything that happens is physically foreordained — to calculate the cause and outcome of any event in the universe. Its function is literally to Know. It. All.

Alex Garland is also a know-it-all. The British science-fictioneer has, as a screenwriter and director, staked out a particular genre of galaxy-brain theater. His films create twists and haunting alternative worlds from hard science and big-think, be it artificial intelligence in “Ex Machina” or bio-horror in “Annihilation.” Garland is concerned with macro forces and the mortals who would master or be mastered by them; he operates at god-level.

The eight-episode “Devs,” which begins Thursday on FX on Hulu, is Garland’s first television series, and he writes and directs it in full. The size has a magnifying effect: It showcases what Garland does well — ideas and atmosphere — while amplifying his weaknesses in character and plot. As the techies say, it scales — for better and for worse.

“Devs” is breathtakingly grand in ideas and ambition. (Less so in content. I’m not convinced the story couldn’t have been told in a two-hour film.) In a few words: Lily (Sonoya Mizuno), an engineer at Forest’s company, Amaya, is drawn into a dangerous intrigue when her boyfriend, Sergei (Karl Glusman), is assigned to the project that gives the series its title, then disappears.

His fate proves to be the least of the series’s questions. Among them: What is Devs? Why does Forest want it hushed up? Could the knowledge it unlocks empower humanity or enslave it? Is it possible to know too much?

The tale that unfolds is both mind-blowing and not terribly complex. But it’s an eyeful to watch. Whatever is happening at Devs is happening inside a Kaaba-like lab, a luminously honeycombed golden cube that resembles the world’s largest Ferrero Rocher box. There is a none-too-subtle mystical vibe, from the ring lights that halo the massive trees on Amaya’s Bay Area campus to Forest’s cult-leader magnetism and the cold-burn fervor of his head acolyte, Katie (a quietly terrifying Alison Pill).

Whatever is happening (sorry, the “Devs” spoiler list is as restrictive as a Silicon Valley NDA) is not good, we can infer from Amaya’s low-key Evil Corp aesthetic. The offices are spooky-minimalist, and a colossal statue of a little girl bestrides the campus, her eyes glassy and piercing like a nightmare doll’s.

The menace at Amaya is born of pain. Unlike Oscar Isaac’s misogynist tech-bro in “Ex Machina,” Forest is driven by a personal wound. (FX considers his motive a spoiler, and Offerman’s reserved, stiff-furry-lip acting style gives little away, but if you haven’t figured out the basics by early in the second episode, you should be checked for a concussion.)

The series has a “Mr. Robot” suspicion of capitalist power, a “Westworld” fascination with free will and a blacker-than-“Black Mirror” fear that digital utopias can be infected with hellish malware. But Garland’s distinctive voice keeps whispering through those corporate-campus trees.

While his peers have social and political fixations, Garland is essentially a religious storyteller. His religion just happens to be physical science; his incense, subatomic particles; his Holy Spirit, human consciousness.

Garland, as a writer, is dealing with an enormous subject in “Devs” — knowledge at the scale of multiple universes. And as a director, he creates a trippy screen vocabulary to communicate this scope: not just FX tricks that show the same actor performing many possible actions in the same scene, but images of austere vastness, married to a droning, chanting, hypnotic score from Ben Salisbury, The Insects and Geoff Barrow.

Even through the slow stretches and occasional pretentiousness, I loved the sensual experience of “Devs”; it was like a spa visit for my eyes and ears. For an ideas guy, Garland is an especially strong visual storyteller. The end of “Annihilation” may have been confounding, but its largely wordless, beautifully choreographed climax had a deeper, subliminal logic.

Unless you’re David Lynch, though, it’s hard to do that at series length. Television relies more on dialogue and conversation, and there, “Devs” is shakier, given to unnatural expository downloads and speechifying. “Such big decisions being made about our future made by people who know so little about our past,” says Stewart (Stephen McKinley Henderson), a programmer who begins the series as a wisecracking breath of fresh air but, by its end, is reciting poetry and speaking in aphorisms.

The show’s arid, cerebral tone is matched by its performances. Mizuno’s manner is both intense and detached, which may fit the stylized cool of the direction but doesn’t give a viewer much to attach to in the focal character. The liveliest role goes to Zach Grenier (“The Good Wife”) as Forest’s security chief and enforcer, who spikes all the “Devs” talk with action.

Mostly, though, the talk in “Devs” is the action. This is the sort of drama where even the thugs serve up disquisitions on Tiananmen Square and the historical uses of power along with their beat downs. It’s half techno-thriller, half art-directed TED Talk on determinism, multiverse theory and the observer effect. The biggest fights over “Devs” will probably be over the things I can’t tell you about, particularly the ending and how it resolves the big conundrums the first seven episodes set up.

Personally, I found that ending a little empty and unsatisfying. Yet I didn’t regret going on the haunting philosophical forest walk it took to get there. Garland is telling a daring story, one that, among other things, questions whether we’re even watching a story in the traditional sense — in which characters make choices and determine their fate — or if, as Forest argues, “Life is just something we watch unfold, like pictures on a screen.”

It’s both a timeless argument and one appropriate for the era of peak TV. Is our existence an interactive adventure? Or is it, “Devs” asks, just the ultimate binge-watch?