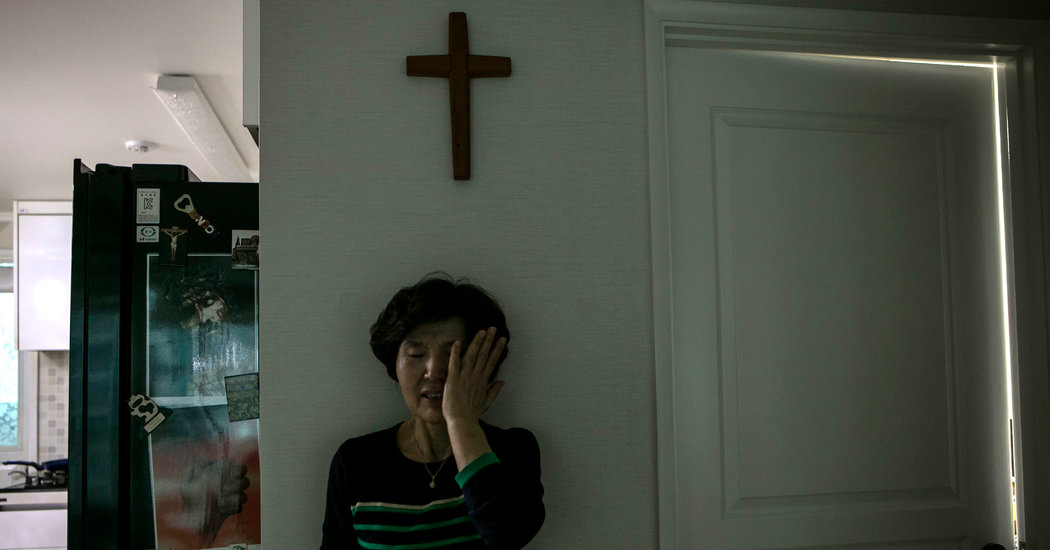 SEOUL, South Korea — More than 1.2 million citizens have called for the secretive church to be disbanded. One province asked the public to report church members to a hotline for coronavirus testing. Smartphone apps help identify the church’s 1,100 once-obscure facilities in South Korea, most already plastered with “off-limits” signs by disease-control officials.

Even before the coronavirus scourge, South Korea’s Shincheonji Church of Jesus had faced increased suspicion over its tactics to attract tens of thousands of recruits. But in the month since the church was identified as the epicenter of infections in the country, it has become the target of scorn, vilification and open hatred.

The founder, Lee Man-hee, 88, who has promised its 240,000 members entry to the “new heaven and new earth,” is now the potential subject of a prosecutor investigation into possible murder charges.

Parents of recruits accuse him of “brainwashed slavery.” Former members describe him as another in a long-line of spiritual snake-oil salesmen in South Korea, a fertile ground for untraditional religious sects.

A large majority of the country’s more than 7,500 coronavirus patients are Shincheonji members in Daegu, a city in the southeast, or people who had come into contact with them. An additional cluster of cases has emerged in Cheongdo, a county near Daegu that is Mr. Lee’s birthplace and a regular pilgrimage destination for his followers.

The church has protested what it called “scapegoating” by South Koreans eager to discredit what had been the fastest-growing religious sect in the country, as other big churches worry about declining membership.

“The entire society has gone berserk against our church since the virus outbreak,” said Lee Young-Soo, 54, a Shincheonji member whose sister, a fellow church member, died after having fallen from her seventh-floor apartment in the southern city of Ulsan last month. Ms. Lee said her sister had confided that her husband’s long-running abuse over her church had intensified after the virus outbreak.

Another Shincheonji member who church officials said had suffered spousal abuse, a 42-year-old mother of two, died after having fallen from her 11th floor apartment on Monday night. The police are investigating both cases.

“The society is so wrong, and I am so saddened,” Ms. Lee said.

Still, the church is inextricably linked to the spread of the affliction in South Korea, one of the largest outbreaks outside China.

The church’s clandestine nature is part of what made it a focal point for the country’s anger and fear. Officials have struggled to locate and screen church members for the virus.

Kwon Jun-Wook, a senior disease-control official, said last month that when officials had tried to reach church members, they found many incommunicado. Daegu’s mayor said Tuesday that dozens of Shincheonji members must be immediately tested for the coronavirus or face fines. The city of Seoul has accused Mr. Lee and his disciples of failing to provide full membership lists.

“Lee Man-hee is a psychopath who has lied and lied until he believed his own lie that he was the true messiah,” said Jeong Ji-su, a former disciple who left last July.

An Era of Messiahs

Mr. Lee is far from the first person claiming to be a messiah in South Korea.

Shamanism — worshiping a multitude of deities including dead parents, ancient warriors and mountain spirits — has infused society for millenniums, interacting with new arrivals like Christianity and making some Koreans amenable to embracing new belief systems, said Koo Se-woong, a scholar who has researched Korean religions.

“Promising a new world and a ‘New Jerusalem’ in Korea is nothing new among Christian churches in South Korea,” Dr. Koo said.

As the country has suffered war and deprivation in the past century, 120 self-styled messiahs promising a new world of peace have emerged, 70 commanding sizable followings. The best known is the Rev. Sun Myung Moon, founder of the Unification Church, who died in 2012.

Some ended up in jail on fraud or rape charges or lived in disgrace after the rapture they had promised never came. But their apostles split and spread, rebranding themselves into new sects. Mr. Lee was one of them.

On the day she first encountered the church in September 2016, Ms. Jeong, 25, recalled in an interview, she had been hurrying through a Seoul subway station. Two friendly looking women and a young man about her age asked if she could spare a few minutes to give feedback on a movie script.

They entered a fast-food restaurant, where her initiation began. She became a full member in July 2017. Ms. Jeong said she had been brainwashed and spent the next two years recruiting fellow young people just as she had been.

“The entire church was a con job,” Ms. Jeong said. “When they targeted you for proselytizing, everyone who approached you in the cloak of chance encounter was a member of Shincheonji — only that you didn’t know it.”

“Young people are attracted to Shincheonji at times like this when opportunities dwindle because the church raises hopes of jobs as pastors and preachers and promises a spiritually fulfilling life, even promising eternal life and high priestship when the new world comes,” said Kim Seong-Ja, 58, a former member.

Young converts often lived together in cheap crowded rooms, former members said. Dating, or any distraction from the goal of winning converts, was discouraged.

“We were nothing but proselytizing robots,” said Lee Ho-yeon, 24, a former member. “I spent as little as possible on food and used what little money I left in my pocket to buy Starbucks coffee for people I wanted to convert.”

Because of Shincheonji’s suspect image, proselytizers would delay revealing their affiliation until confident that their recruits were ready, former members said.

Once they ​passed written tests after months of Bible studies, converts ​became participants in a spectacular commencement ceremony. Life as a church member included meetings, proselytizing missions on the streets and daily progress reports on how many people they had tried to recruit and how their recruits were doing in Bible studies, former members said.

Worshipers were told to keep their membership secret from relatives. If parents became suspicious, former members said, handlers had told them to lie.

When parents tried to stop worshipers from attending the church, many left home. Ms. Lee said she ate as little as possible at home in case her parents mixed her food with sleeping pills to get her away from the church.

“They said it was OK to lie to our parents, as it was OK for moms to call bitter medicine a chocolate when feeding it to a sick baby,” said Stella Seo, 29, who was in Shincheonji for seven years until late 2018.

‘We Were Taught Not to Be Afraid of Illness’

The practice of disavowing membership carried over to how at least some church members responded to the coronavirus outbreak. South Koreans were outraged when it was revealed last month that church members had received a message telling them to deny their affiliation with Shincheonji and to keep proselytizing even after the outbreak was reported among its congregation.

Shincheonji said that the instruction was not church policy and that it had punished the official who issued it.

While Shincheonji’s recruitment methods have drawn recent condemnation for helping spread the virus, its approach has long galled more mainstream churches, which have accused it of sending undercover proselytizers, known as harvesters, into their congregations and stealing members.

Sometimes, the harvesters were accused of sowing internal discord in a church and taking it over, a feat celebrated as “moving a mountain” among Shincheonji members.

Shincheonji said that disgruntled former members and traditional churches alarmed over their shrinking congregations had spread false rumors to discredit the church.

But in video footage of internal lecturing viewed by The New York Times, a proselytizing instructor said that the old way of founding a church and then building a congregation “is too expensive, takes too much manpower and is too time-consuming.”

“It’s better to swallow existing churches,” she said to a chorus of amens. “But you must keep this strategy to yourself.”

Mr. Lee has defended the church’s response to the outbreak, and Shincheonji has issued statements through a spokesman repeating that the church was cooperating with the government and demanding an end to “scapegoating.”

Eo Kwang-il, 38, a Shincheonji member, said that because of overwhelming bias against their church, members hid their affiliation and used ruses to win converts. But he said the church never forced members to abandon school or jobs for the sake of proselytizing.

How the church conducts gatherings, however, has drawn scrutiny as a spreader of the disease. Worshipers sit packed tightly on the floor and attend even when sick, former members say.

“We were taught not to be afraid of illness,” said Lee Ho-yeon, who left the church in 2015. A church leader boasted to followers on Feb. 9 that although hundreds of people had died in Wuhan, China, where the outbreak began, no Shincheonji worshipers there became sick, according to the audio file of the sermon released by Yoon Jae-Deok, an expert on religious groups like Shincheonji.

The crowded conditions of Shincheonji churches did make them more vulnerable to contagious diseases, said Hwang Gui-hag, the editor in chief of the Seoul-based Law Times, which specializes in church news.

But he said that in his view, the central and regional governments, caught off-guard by the virus, had found a convenient point of blame in the church. He said mainstream churches had a vested interest in disparaging Shincheonji, as did the “cult hunters” who demonize the church so that families hire them to remove relatives.

Shincheonji’s followers call ​Mr. ​Lee, the founder, by biblical references like “the Promised Pastor​.” He once gathered his 12 deputies and re-created the scene from the Last Supper.

“It’s embarrassing now to admit this,” said Ms. Seo. “But when I first saw him, I was so overwhelmed with emotions that I wept.”

Ms. Seo said she had felt proud when she and thousands of other church members gathered under a scorching summer sun to practice for the “​world ​​​peace festivals” that Mr. Lee and Kim Nam-hee, a former deputy, organized. Tens of thousands were mobilized to dance, sing and perform.

Ms. Kim, the former deputy, split with Mr. Lee in 2017 and has since called him “no messiah but just a plain old religious con man.” The church called her “an apostate.”

Distressed parents have taken children to “cult hunters” — activist pastors affiliated with mainstream churches who offer “reconversion” services. In some cases, Shincheonji representatives file a missing person’s report with the police and visit the homes or work sites of relatives to protest.

Both of Ms. Seo’s parents and her brother quit their jobs to stay with her as she violently resisted a reconversion program. Ms. Seo said she had refused to eat for eight days and slashed her wrist and thigh with a razor blade.

“As far as I was concerned, it was a fight against Satan,” she said.

After two months in the program, Ms. Seo rejected the church.

Other families said their efforts to persuade a relative to leave the church had failed.

Doo Song-ja, 64, took her 33-year-old daughter, Hong Eun-hwa, twice to a reconversion program, but she refused to leave the church.

“The only thing left for me is to erase her from my memory,” Ms. Doo said. “But how can I?”

Shincheonji has said that social bias against it has intensified lately, with members reporting taunting at work and death threats.

“Many church members were afraid to come out and reveal their church membership, given the overwhelming blaming coming from politicians and news media that called Shincheonji the originator of the virus outbreak,” Kim Si-mon, a church spokesman, said in a statement.

The government has repeatedly warned that the battle against the coronavirus depends on how quickly infected church members can be isolated. Mr. Lee has urged them to “follow the government’s instructions,” avoid gatherings and proselytize only online.