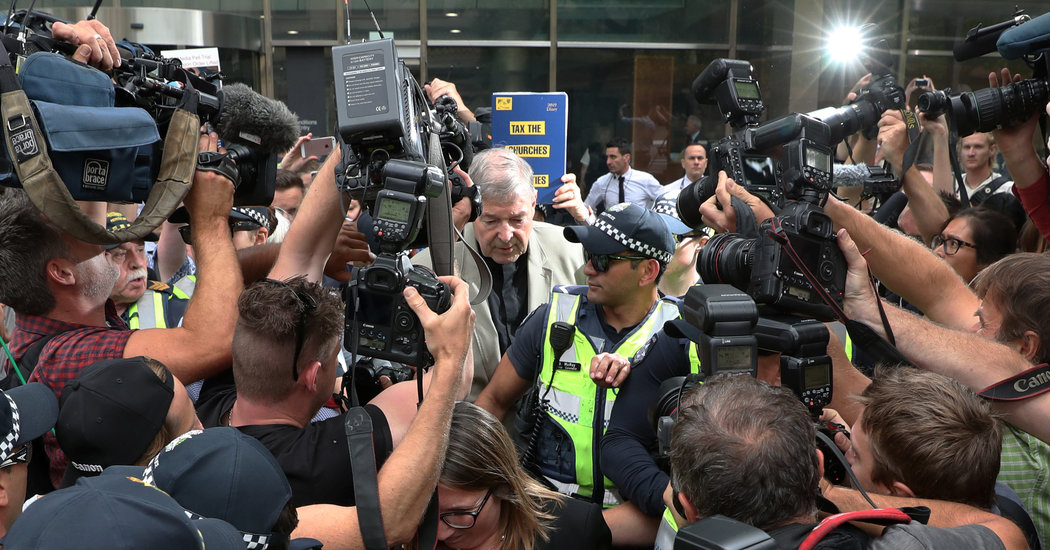 MELBOURNE, Australia — Dozens of prominent Australian news outlets and journalists have been ordered to appear in court to answer allegations that they violated a gag order barring coverage of the trial of Cardinal George Pell, a former Vatican official who was convicted in December of molesting children.

Among those summoned to appear in a Melbourne court on April 15 were editors and reporters for Fairfax Media, which owns The Age, The Sydney Morning Herald and The Financial Review, and for Nationwide News, which is owned by News Corp. They could face fines and possibly prison time.

Some of the news outlets themselves were also named in the summons. “I’ve never seen so many media organizations and journalists charged in one hit,” said Jason Bosland, director of the Center for Media and Communications Law at Melbourne Law School.

Chief Judge Peter Kidd, who presided over Cardinal Pell’s trial in the County Court of Victoria, imposed a suppression order on journalists who were covering it, on the grounds that news reports could prejudice a jury in what was then expected to be the second of two trials.

After prosecutors decided in February not to proceed with a second trial, the order was lifted, and Australian news outlets were free to report that the cardinal had been found guilty months earlier. He was sentenced this month to six years in prison.

The summons sheet made public on Tuesday does not specify how the accused journalists and news organizations are alleged to have violated the gag order.

But when the cardinal was convicted in December — news that was promptly reported overseas and on social media — some of the news outlets published articles saying that an important story was being kept secret from the Australian public. The next day, Judge Kidd held an impromptu hearing in which he called for prosecutors to initiate contempt-of-court proceedings against journalists.

One of the articles, in the tabloid The Telegraph, read in part: “A high-profile Australian with a worldwide reputation has been convicted of an awful crime, but The Daily Telegraph and other Australian media are prohibited from telling you about it.” The headline read, “It’s the Nation’s Biggest Story.”

Other outlets published similarly cryptic articles. The front page of The Herald Sun, a Melbourne paper, bore the headline “CENSORED.”

The world “is reading a very important story that is relevant to Victorians,” read that article, alluding to overseas coverage. That paper’s editor, Damon Johnston, was on the list of those summoned.

To comply with the suppression order, The New York Times published news of Cardinal Pell’s conviction in print only in the United States, and it blocked copies of the edition from being delivered to Australia. It did not report the guilty verdict online until the judge lifted the order in February.

Documents filed on Friday by the director of public prosecutions in the state of Victoria, where the cardinal’s trial was held, asked the state’s Supreme Court to find the journalists and news outlets guilty of breaching the gag order; interfering with the administration of justice; aiding and abetting international news outlets in violating the order; and “scandalizing the court” by publishing material that could undermine public confidence in the administration of justice.

Justin Quill, a lawyer representing all of the summoned companies and journalists, said he could not comment lest he be held in contempt of court himself, but he said he would “vigorously defend the charges.”

The Nine Network, which owns Fairfax Media, said in a statement that the company “and the named employees deny the allegations.”

Mr. Bosland, of Melbourne Law School, said there was no statutory limit to a prison sentence that a judge could impose for contempt of court. But he said imprisoning journalists was “a very serious matter” and that fines were more likely in this case, unless any of the accused had been found to have violated such orders before. He said fines for contempt of court could range up to about 200,000 Australian dollars, roughly $140,000.

In 2014, a conservative commentator, Derryn Hinch, spent 50 nights in prison after failing to pay a fine incurred for breaching a suppression order. He had been convicted of similar violations in 1987 and 2011.

Last month, The Law Council of Australia called for a review of suppression orders, which they said had failed to keep up with the rapid dissemination of information via the internet.

Suppression orders that ignore the proliferation of social media endanger the public, Arthur Moses, the group’s president, recently told reporters. He said the law needed to adapt to recognize that separating juries from the internet was becoming impossible.