Pope Francis Breaks Some Taboos on Visit to Persian Gulf 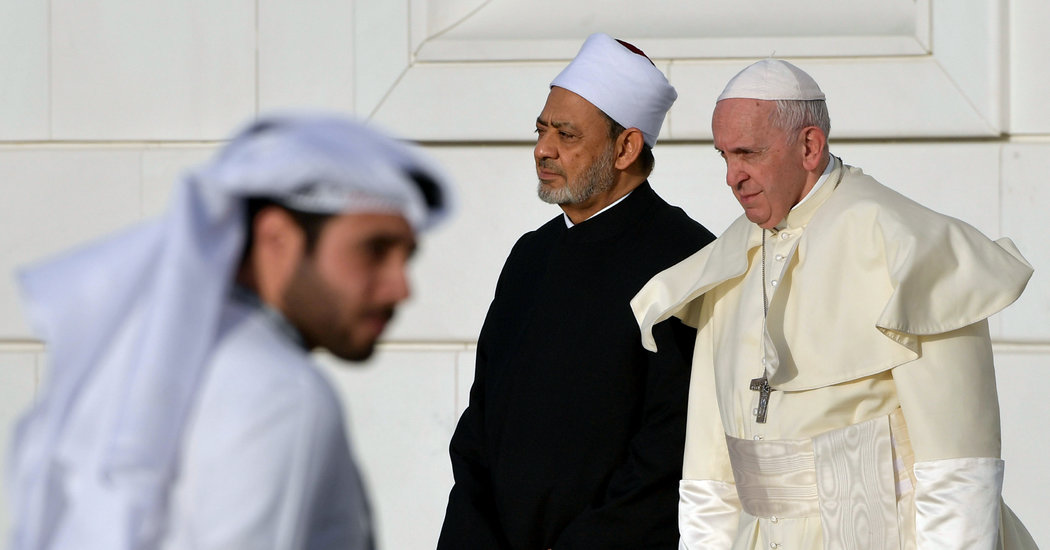 ABU DHABI, United Arab Emirates — Pope Francis used the keynote address of his roughly 40-hour stay in the United Arab Emirates to breach delicate taboos on Monday, specifically mentioning Yemen, where his hosts are engaged in a brutal war, and calling on countries throughout the Gulf region to extend citizenship rights to religious minorities.

The remarks by Francis were exceptionally candid for a pope who as a general rule does not criticize the country that hosts him and avoids drawing undue attention to the issues that its rulers would rather not discuss. Rather, he often weighs in diplomatically before landing in the country, or waits until he crosses the border to the next.

But on Monday, during the first visit by a pope to the Arabian Peninsula, where Islam was born, Francis was blunt in a speech before hundreds of leaders from a broad array of faiths on a day used to underscore the need for humanity to stop committing violence in the name of religion.

“Human fraternity requires of us, as representatives of the world’s religions, the duty to reject every nuance of approval from the word ‘war,’” Francis said at the towering Founder’s Memorial in Abu Dhabi.

“Let us return it to its miserable crudeness,” he added. “Its fateful consequences are before our eyes. I am thinking in particular of Yemen, Syria, Iraq and Libya.”

Later in the speech, the pope called for “societies where people of different beliefs have the same right of citizenship and where only in the case of violence in any of its forms is that right removed.”

Citizenship rights in the United Arab Emirates are predominantly reserved for native-born Muslims. There are a million Christian migrants in the country, but throughout the larger region they are suffering persecution and bloodshed and are essentially disappearing.

After his speech, Pope Francis and Sheikh Ahmad al-Tayeb, the grand imam of an influential Egyptian mosque, Al Azhar, signed a “Document on Human Fraternity.”

The document, a sort of manifesto of peace for two religions whose adherents have spilled each other’s blood for centuries, called upon “all concerned to stop using religions to incite hatred, violence, extremism and blind fanaticism, and to refrain from using the name of God to justify acts of murder, exile, terrorism and oppression.”

The declaration added that “the pluralism and the diversity of religions” was willed by God, and, “therefore, the fact that people are forced to adhere to a certain religion or culture must be rejected.”

And critically for a pope who has seen his flock massacred in their churches, and for Muslim and Jewish minorities who have seen their houses of worship desecrated, the document asserts that the “protection of places of worship — synagogues, churches and mosques — is a duty guaranteed by religions, human values, laws and international agreements.”

“Every attempt to attack places of worship or threaten them by violent assaults, bombings or destruction, is a deviation from the teachings of religions,” it added.

The pope’s speech included calls for greater education about other religions and peoples, a condemnation of “the seductions of materialism, hatred and prejudice” and the “fake news” that he suggested spread it.

But most of all, it was a forthright message from a pope whose own church, to the dismay of many of his supporters, still recognizes the difference between a just and unjust war. He called on religious leaders to put aside their sometimes violent differences and take the lead in bringing peace to dangerous times.

The pope, who has advocated for persecuted Christian and Muslim migrants and for the poor of all stripes, whether they hail from the Middle East, Europe or the United States, urged his fellow religious leaders to oppose “the arming of borders, the raising of walls.”

The speech came on a day that Vatican officials confirmed that Pope Francis had received an appeal from President Nicolás Maduro to facilitate dialogue in Venezuela’s deepening political crisis.

The pope’s remarks in Abu Dhabi, delivered in Italian, were the finale of an interreligious conference about brotherhood and the culmination of a day in which the pope met privately and exchanged gifts with the leaders of the United Arab Emirates at the presidential palace and then reflected with Muslim leaders on peace at a giant mosque in the city.

At times, it seemed his hosts had not gotten the memo.

In the morning, a salute by 21 heavy artillery guns welcomed the pope’s arrival to the presidential palace, located on the turquoise waters of the Gulf. Soldiers swinging their left arms while carrying machine guns in their right marched in green uniforms as a band played the Vatican and United Arab Emirate anthems on bagpipes, silver trumpets and tubas.

The pope, escorted through the sprawling white palace gardens by horse-mounted guards, white S.U.V.s and black BMWs, came out of his modest navy blue Kia hatchback.

He stood under a white gazebo, flanked by Abu Dhabi’s crown prince, Sheikh Mohammed bin Zayed al-Nahyan, and by the Emirati vice president and prime minister, Sheikh Mohammed bin Rashid al-Maktoum. Above them, fighter jets screamed across the blue sky, trailing yellow and white smoke — the colors of the Vatican flag.

As the smoke lingered above the palace and the gazebo, the pope greeted the Emirati delegation, with the men in sunglasses and dishdashas, and the women in traditional chadors. A delegation of cardinals and bishops, in their cream and white tropical soutanes, then greeted the royals.

The pope entered the palace where he signed the book of honor, writing that he sent the Emirati people “divine blessings of peace and fraternal solidarity.” He received from the prince a framed 1963 decree by Abu Dhabi’s ruler at the time donating the land for the first Catholic church in the Emirates.

Later in the day, the pope greeted his friend Sheikh al-Tayeb outside the magnificent Sheikh Zayed Grand Mosque in Abu Dhabi. As the wind tossed around the hems of their robes, they entered together to meet the Muslim Council of Elders, a group of religious leaders specializing in interreligious dialogue.

Soon after, they emerged and traveled to the Founders Memorial in downtown Abu Dhabi.

Sheikh al-Tayeb denounced the news media’s characterization of Islam after the attacks of Sept. 11, 2001, as a “bloodthirsty religion” and of Muslims as “savage barbarians.”

He said that, in previous meetings, Francis and he had shared thoughts about God’s prohibition of spilling human blood.

The pope in turn offered warm words of praise for his wealthy host nation, which has offered a large degree of religious freedom to the mostly Hindu and Christian migrants who have come to work here.

“I wish to express appreciation for the commitment of this nation to tolerating and guaranteeing freedom of worship, to confronting extremism and hatred,” said Francis, who church officials have said is seeking to ease the construction of churches for the one million Catholics in the Emirates.

“Here, in the desert,” he added, “a way of fruitful development has been opened which, beginning from the creation of jobs, offers hope to many persons from a variety of nations, cultures and beliefs.”

Those included Christians, he said, whose presence in the region dated back centuries and who had contributed to the country’s growth and success.

Presently, there are some restrictions on rights for non-Muslim migrants.

It is essentially impossible to get citizenship here and minorities must worship behind walls, sometimes unmarked. Jews in Dubai have complained of harassment, and rights groups have been blocked from conducting research in the country.

Religious minorities cannot openly profess their faith in the media or in the streets. Proselytizing is a serious crime.

“I cannot comment on that,” Thani Ahmed al-Zeyoudi, the Emirati minister for climate change and the environment, said in an interview. He did say, though, that minorities, including Christians, had “a right to practice their religion and, at the same time, we have to ensure that they are living in a very peaceful manner.”

Asked about the pope’s remarks about the suffering in Yemen before he had left Rome on Friday, the Emirati minister said, “We heard the statements of the pope on Yemen and it has been fully endorsed and supported by the leaders.”

The pope’s speech posed a question that has vexed religious leaders since time immemorial.

“How, in short,” he asked, “can religions be channels of fraternity rather than barriers of separation?”

His answer seemed to be a fundamental understanding that, beyond just tolerance, “all persons have equal dignity and that no one can be a master or slave of others.”

He urged the gathered leaders to resist a “recurrent temptation” in religion to judge others as enemies, and to insist that “no violence can be justified in the name of religion.”

When it came to recognizing everyone’s dignity and rights, he said, “There is no alternative: We will either build the future together or there will not be a future.”