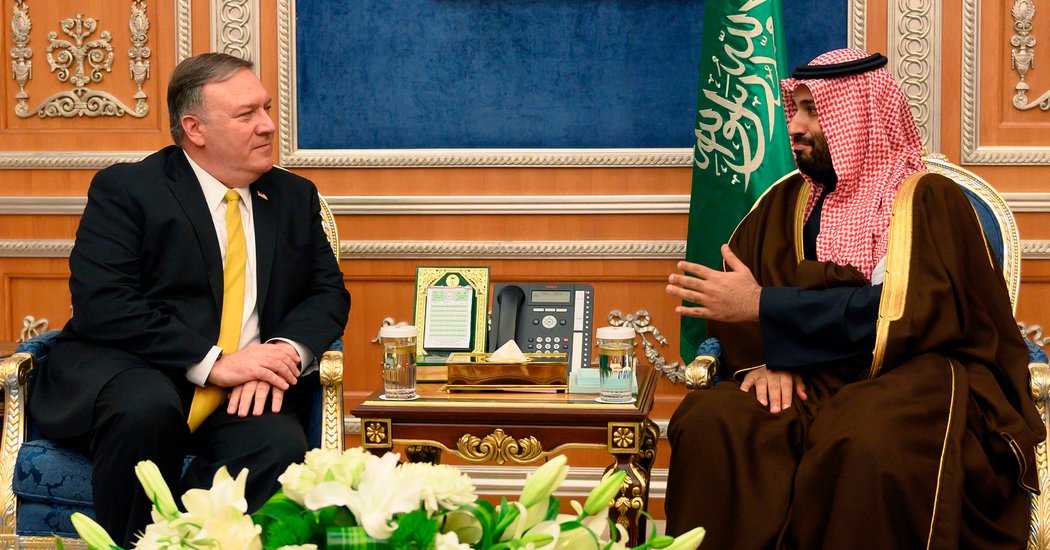 At the same time, Mr. Pompeo reaffirmed the two nations’ shared goal of opposing Iranian policies in the Middle East.

“I want to talk to you about a couple of places we’ve been,” Mr. Pompeo told Prince Mohammed bin Salman, the de facto ruler of Saudi Arabia, at the start of their morning meeting at the royal palace. “We think we learned a lot along the way that will be important going forward.”

Prince Mohammed, apparently sensing the delicate political situation, said, “We’ll try to add more positivity to your trip, as much as we can. And we’ll try to cooperate more.”

Mr. Pompeo has been traveling through the Arab world since leaving Washington on Jan. 7, and Saudi Arabia is the most important stop on the trip.

At each stop, Mr. Pompeo has talked about the importance of countering Iran, a country whose Shiite Muslim government is often at odds with the Sunni Muslim rulers of many nations in the region.

“We certainly talked about our effort to counter Iranian malign influence,” Mr. Pompeo said at a news conference at the airport before flying to Oman, his final stop.

Saudi Arabia is Iran’s main rival and an old American ally — as well as the United States’ biggest buyer of arms — though Prince Mohammed’s actions are roiling the region and unsettling the kingdom’s relationship with the United States.

On Monday morning, Mr. Pompeo left Al Faisaliah Hotel in central Riyadh, the capital of Saudi Arabia, with a list of problems to discuss with Prince Mohammed and his father, King Salman.

The list included the killing by Saudi agents in October of Jamal Khashoggi, an outspoken Saudi dissident who lived in Virginia; the Saudi-led blockade of Qatar, a crucial military partner of the United States; and the Saudi-led air war against Houthi rebels in Yemen, which has resulted in the world’s worst humanitarian crisis, with many Yemenis starving.

The United States Embassy in Riyadh wrote on Twitter that Mr. Pompeo and Prince Mohammed had agreed Monday on the “need for de-escalation and adherence” to agreements reached at peace talks in Sweden over the Yemen war.

Mr. Pompeo insisted on upholding the cease-fire and pullback of forces in the port city of Hudaydah, the embassy said. “A comprehensive political solution is the only way to end the conflict,” it said.

Human rights abuses in Saudi Arabia are also under the international spotlight. On Sunday, The New York Times published an Op-Ed by Alia al-Houthlal, the sister of a women’s rights activist imprisoned in Riyadh, Loujain al-Houthlal, beseeching Mr. Pompeo to ask Prince Mohammed for the release of her sister.

Ms. Houthlal wrote that her sister had been tortured in prison, and that a close associate of the prince, Saud al-Qahtani, who has been implicated in the murder of Mr. Khashoggi, was present at several torture sessions.

Over the weekend, Rahaf Mohammed Alqunun, an 18-year-old Saudi woman who had fled the kingdom, arrived in Canada after being granted asylum there.

She has talked of the plight of women in the Saudi Arabia and the oppressive system of male guardianship over women, despite Prince Mohammed’s promotion of more liberal social policies in some areas.

Mr. Pompeo said he had spoken to Prince Mohammed about concerns over the imprisonment of women’s rights activists. “Their commitment was that the process, the lawful judicial process here, would take place,” he said. “They understand the concerns that some have.”

But many of the most prominent activists being held have not been charged with any crimes, making it unclear what process Mr. Pompeo was referring to. Critics also question the independence of the judiciary in Saudi Arabia, one of the world’s few absolute monarchies, where few trials are open to the public or the news media.

Amid the growing criticism of Saudi Arabia, Mr. Trump has voiced his backing of Prince Mohammed, 33, who has secured power in the kingdom by ousting his rivals, including detaining other members of the royal family in the Ritz-Carlton in Riyadh.

But many other American officials, including in the State Department, Pentagon, C.I.A. and Congress, have been more circumspect and increasingly view the prince as an unreliable partner.

The visit with Prince Mohammed on Monday was the first for Mr. Pompeo since an emergency trip in October, as the diplomatic crisis over the murder of Mr. Kashoggi was ballooning. In his previous visit, Mr. Pompeo flew to Riyadh and posed for photographs in which he shook hands with the prince and smiled, drawing intense criticism for the images of bonhomie.

Mr. Khashoggi was killed and dismembered by a Saudi hit team while visiting the Saudi Consulate in Istanbul on Oct. 2, Turkish officials have said. The C.I.A. assessed that Prince Mohammed had ordered the killing.

President Trump has declined to endorse that finding and has said the United States would continue its relationship with Saudi Arabia and with the prince, who is close to Jared Kushner, the president’s son-in-law and main Middle East adviser.

Mr. Pompeo said at the Monday news conference that both the prince and his father, King Salman, acknowledged in separate meetings at the palace that the Saudi government needed to show accountability for the murder. Yet Mr. Pompeo declined to answer a question about how his demands square with the C.I.A.’s conclusion that Prince Mohammed was behind the assassination.

Middle East experts working in the State Department have concluded that the Saudis have not met the threshold of accountability yet.

A Saudi court has begun trial proceedings for 11 suspects in the Khashoggi case, and prosecutors are seeking the death penalty for five of them. In October, the government said it had arrested 18 people, and it is unclear what has happened to the other seven.

The Saudi government has also removed a few senior officials from their posts, including Mr. Qahtani, the close associate of the prince who directed the kingdom’s social media efforts.

When pressed by a reporter about Prince Mohammed’s conduct, Mr. Pompeo ultimately said that Saudi Arabia’s “leaders are going to act in their country’s interests.”

“That’s their obligation, the same way mine is to act in America’s best interests,” he said.

Given the darkening views on Saudi Arabia in the West, it will be difficult for the Trump administration to avoid scrutiny of the relationship, and for Prince Mohammed to overhaul his image, said Hussein Ibish, a scholar at the Arab Gulf States Institute in Washington.

“There’s a narrative that a dictatorship is emerging where there was once a monarchy,” he said. “This is a very, very damaging narrative.”