Pinterest Is Rare ‘Unicorn’ Preparing an I.P.O. Without Hemorrhaging Cash 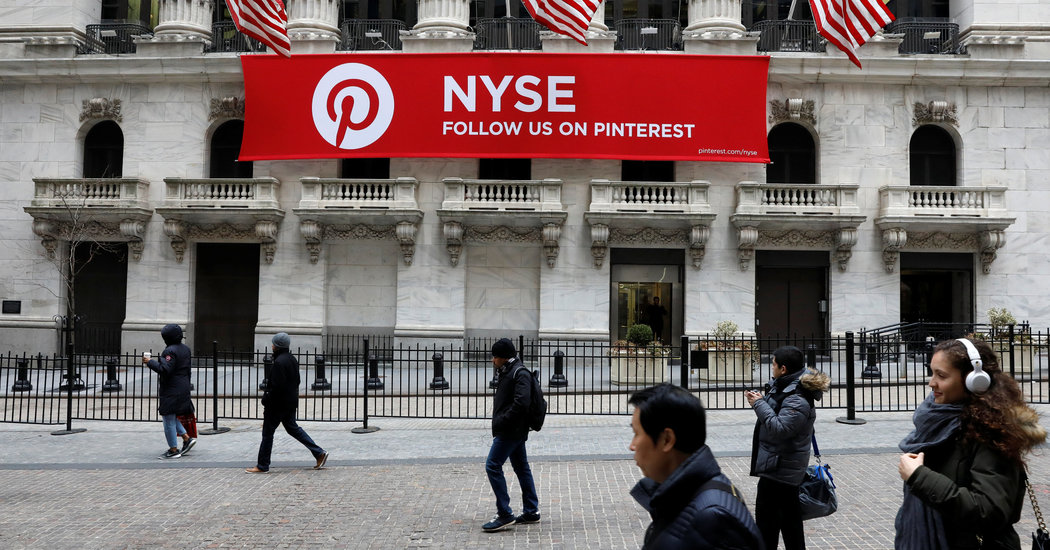 SAN FRANCISCO — Pinterest is preparing for its debut on Wall Street with a claim that few other “unicorn” start-ups can make: It is not a financial sinkhole.

While the company is unprofitable, according to an offering prospectus made public on Friday, its losses are nowhere near as high as those of other well-known start-ups like Uber and Lyft, which are also getting ready to list their shares. That makes Pinterest — which lets people create digital “pin boards” — one of the rarer unicorns, a term applied to start-ups valued at more than $1 billion by private market investors.

The deep losses afflicting many high-profile start-ups have cast investor doubts on the herd of companies that are stampeding toward the public market. Lyft recently revealed that it lost $911.3 million last year. Uber previously disclosed that it lost $842 million in the fourth quarter of 2018 alone. PagerDuty, a software start-up valued at $1.3 billion that also filed to go public this week, said in its prospectus that it was losing money. Only Zoom, a video conferencing company last valued at $1 billion, showed that it was making money, in an offering prospectus it filed on Friday.

Pinterest’s filing reported that the company had lost $63 million in 2018. But that was much narrower than a year earlier, when it lost $138 million.

At the same time, Pinterest is growing quickly. The company’s revenue, which came from advertising, totaled $756 million last year, up 60 percent from a year earlier. It listed a cash stockpile of $628 million.

In its prospectus, Pinterest called itself “a productivity tool for planning your dreams.” The San Francisco company emphasized the visual, image-driven nature of its product, as well as its ability to capture people’s intent to buy things related to their pins. It said its mission was to “bring everyone the inspiration to create a life they love.”

The document provides the first detailed look at Pinterest’s balance sheet. The company confidentially filed to go public in February, with Goldman Sachs, J. P. Morgan and Allen & Company underwriting the offering. It plans to list its shares on the New York Stock Exchange under the symbol PINS.

The filing did not say how much money Pinterest hopes to raise in the offering and did not specify potential share prices. Private market investors, who have poured around $1.5 billion into the company, last valued it at $12 billion. Its largest shareholders include Bessemer Venture Partners, FirstMark Capital, Andreessen Horowitz, Fidelity Investments and Valiant Capital Management, according to the filing.

In a move that has become common among tech firms, Pinterest plans to divide its stock into two classes, giving its founders, top executives, employees and directors 20 votes per share. New investors will get one vote per share.

Some rivals are not increasing their revenue as quickly as Pinterest, said Kathleen Smith, a principal at Renaissance Capital, a manager of exchange-traded funds for I.P.O.s.

“Like Snap, Pinterest is in the cross hairs of Facebook, and Facebook has always fought a nasty battle against Snap by copying everything it did,” she said, adding that anyone evaluating Pinterest’s stock should consider that competitive threat.

Pinterest was started in Silicon Valley by Ben Silbermann, the company’s chief executive; Evan Sharp; and Paul Sciarra. Mr. Silbermann, 36, previously worked at Google. Pinterest grew out of Cold Brew Labs, a tech incubator founded by the three men in 2008.

Although many unicorns made rapid growth their top priority, Mr. Silbermann favored what he calls “quality growth.” That meant he tried to build Pinterest slowly and steadily, even as its growth started to soar in 2011. “Pinners,” as users are known, essentially used Pinterest to create collagelike mood boards that expressed their aspirations.

Today, pinners pin activities such as what they wear or what they are making for dinner, as well as ideas for remodeling a home or their wedding, or passions like bookmarking and other craft projects.

Mr. Silbermann also deliberately took several years before turning Pinterest into a moneymaking enterprise. In 2014, the company began selling ads. For a spell, its growth appeared to be slowing and it lost executives, until Mr. Silbermann brought in a new chief operating officer, Francoise Brougher, and a new head of sales, Jon Kaplan, both formerly of Google.

Unlike many of its social media peers, Pinterest has mostly avoided the proliferation of conspiracy theory and extremist content on its platform, moving quickly to tamp down on such content when it has bubbled up. In February, Pinterest began removing search results for anything related to vaccines in an attempt to stop anti-vaccination memes from spreading across the site.

In contrast to many hard-charging and brash tech chief executives, Mr. Silbermann has kept a low profile. He rarely sat for glossy magazine covers or showed up at tech industry conferences. At one point, Pinterest was called an “anti-unicorn” because of how it shied from the spotlight. The timing of the unveiling of its prospectus — late on a Friday afternoon — was also in keeping with Mr. Silbermann’s style.

Despite Mr. Silbermann’s low profile, the I.P.O. is expected to generate lots of attention from investors and market observers. “Significant revenue growth and popularity among users is going to be a pretty good recipe for — at a minimum — creating significant buzz around an IPO,” said Barrett Daniels, a partner at Deloitte who focuses on I.P.O. advisory work.

Mr. Silbermann also avoided another trapping of tech founders with the prospectus: He did not publish a founder’s letter on Friday to carry on about his company’s mission and history, something that had become de rigueur among other entrepreneurs.