Philippines Is Struck by Another Powerful Earthquake 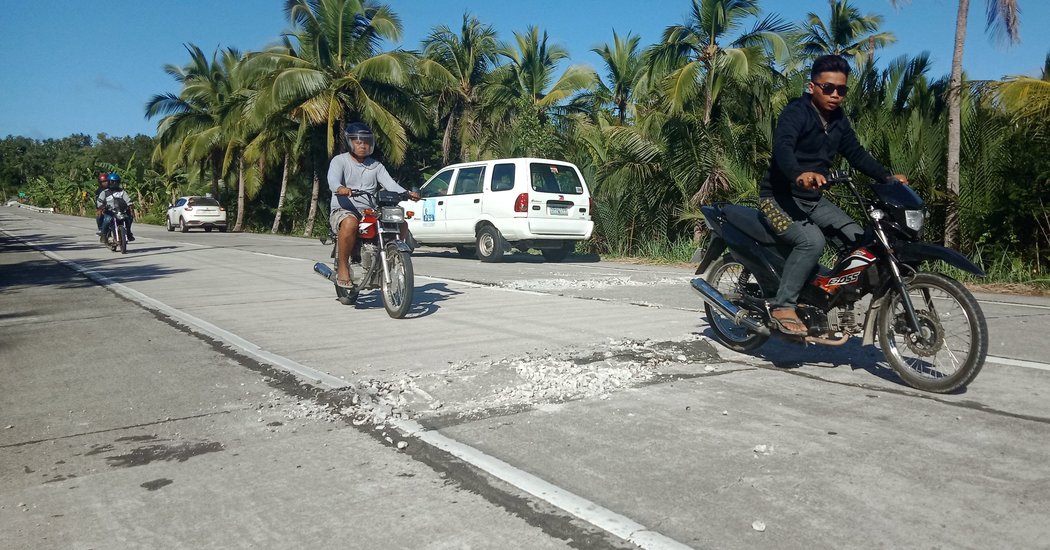 MANILA — The Philippines was hit by a powerful earthquake on Tuesday afternoon, a day after a deadly tremor hit the north of the country.

The earthquake on Tuesday registered a magnitude of 6.4 and was centered in Samar, an island in the central eastern part of the country, the United States Geological Survey said.

The location is about 375 miles southeast of the magnitude-6.1 earthquake Monday that killed at least 16 people and shook buildings in Manila, the capital.

Rescuers in a town near Manila were still searching on Tuesday for people trapped in a supermarket that collapsed in the Monday quake. At least five people died in the collapsed store, officials said.

The Philippines, which sits at the intersection of multiple tectonic plates, sees frequent seismic activity and sometimes deadly earthquakes. Officials from the Philippine Institute of Volcanology and Seismology said the two earthquakes this week did not appear to be connected.

Many areas hit by the quake Monday, which was centered about 40 miles northwest of Manila, were still without power a day later. Electricity providers cut off supply to prevent fires while damage was still being assessed.

About 120 families were evacuated. Schools and government work in affected areas was suspended to allow for building inspections and rescue work.

In Samar, the mayor of the city of Catbalogan, Archie Fuentes, said he saw five houses destroyed.

“There were many damaged structures,” Mr. Fuentes said. “Tiles fell off the walls. I called off work today for government offices in the afternoon. We are on a 24-hour alert.”

One person was reported to have been injured by falling debris.

“People panicked at first,” Mr. Fuentes said over DZBB radio in Manila. “There is still fear as of now.”

Col. Michael David, police chief of the coastal city of Tacloban, which was badly damaged by Typhoon Haiyan in 2013, said people there also panicked on Tuesday. The Asian Development Foundation College in the city was damaged, but no one was immediately reported to have been injured.

“We have not been hit hard,” Colonel David said. “But people are struggling with fear and trauma as rumors quickly spread of a tsunami.”

“Please don’t panic,” he pleaded over local radio. “There is no tsunami alert.”

Mr. David said people had evacuated their homes and offices after the initial shaking, but quickly went back.

“Right now, we have not noticed anything different from the sea. It is normal,” he said. “We are assessing the damage. The city hall is safe and sound.”