Philippine Journalist, a Thorn to Duterte, Turns Herself In to Face Charges 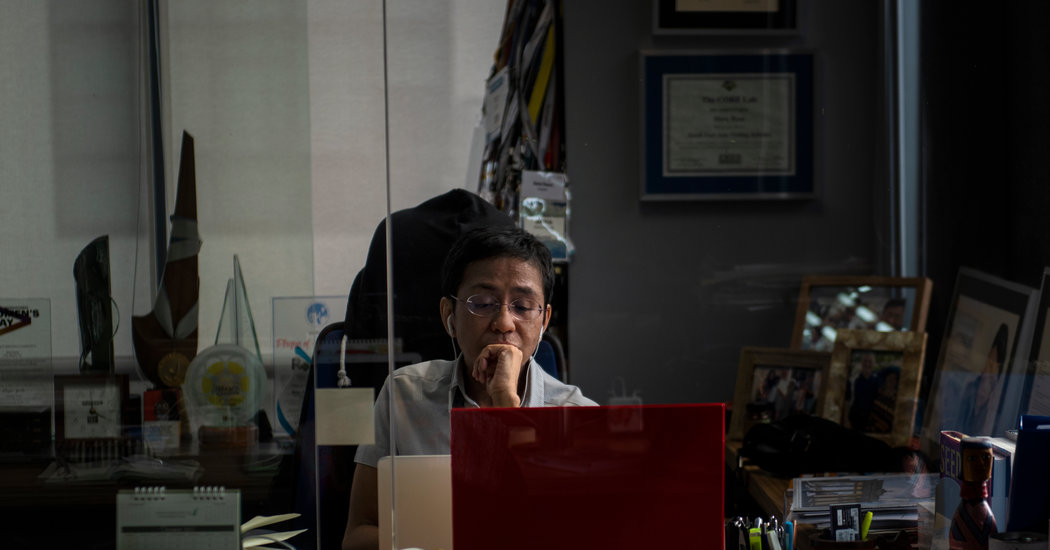 The founder of an online news start-up critical of the Philippine government turned herself in to the authorities in Manila on Monday after a warrant for her arrest was issued over the weekend.

The Philippine government has accused the journalist, Maria Ressa, and her news organization, Rappler, of evading taxes, a move that Rappler said was part of a broader attack on the news media in the Philippines by the government of President Rodrigo Duterte.

Ms. Ressa and Rappler were charged with five counts of tax fraud last week, which the news organization has called “intimidation and harassment.” The penalties could include a fine along with up to 10 years of imprisonment for Ms. Ressa. They have denied the charges.

The government prepared a warrant for Ms. Ressa’s arrest to coincide with her return to the Philippines on Sunday evening after a weekslong trip abroad that included appearances at several high-profile journalism awards ceremonies. In Washington, D.C., Ms. Ressa received the 2018 Knight International Journalism award. In New York, she was given the Press Freedom Award by the Committee to Protect Journalists.

“I’m going to hold my government accountable for publicly calling me a criminal,” Ms. Ressa said in a brief conversation with a group of reporters who greeted her arrival at Ninoy Aquino International Airport in Manila late Sunday. “I am not a criminal.”

On Monday morning, Ms. Ressa arrived at the Pasig Regional Trial Court in Manila and provided head shots for the court and had her fingerprints taken. Her legal team filed a motion for Ms. Ressa to be set free on bail and paid 60,000 pesos, or about $1,100, to secure her release, her lawyer said by phone.

Mr. Duterte is one of a growing group of political strongmen who rode to power in recent years on a wave of populism in their countries and in the process tightened their grip on power. When challenged by the news media, these leaders have often turned on reporters, accusing them of being dishonest and manufacturing “fake news.”

In the Philippines, Mr. Duterte has waged an aggressive antidrug campaign that has led to the deaths of thousands of people. Local news organizations like Rappler closely documented the campaign, provoking international outcry over the killings and causing Mr. Duterte to turn his focus to the news media.

He has threatened several times to block the license renewal for ABS-CBN, the largest broadcast network in the Philippines. He has called reporters “spies” and “sons of bitches” and made thinly veiled death threats, warning reporters that they are “not exempted from assassination.”

Rappler, founded in 2012 as a scrappy investigative and entertainment outlet, has been a main target of his verbal abuse. Its star political reporter, Pia Ranada, in particular has been singled out. At one news conference, Mr. Duterte warned her not to go to his hometown Davao, where he was once mayor, because “something bad will happen to you.”

Earlier this year, Ms. Ranada was stripped of the press pass that allows her to cover Malacañang Palace, the Philippine equivalent to the White House. Rappler reporters have been barred from covering any official presidential events. Such treatment has alarmed media groups.

“More than his inability to tolerate dissent, Duterte’s relentless persecution of the media appears to be part of the increasingly authoritarian direction his presidency has taken,” the National Union of Journalists of the Philippines said in a statement on Sunday night.

Rappler’s newsroom has also been on the front lines of a war against misinformation on Facebook, where most Filipinos get their news. Rappler reporters have been the target of online death and rape threats so severe that senior editors have debated installing bulletproof windows in the news organization’s office.

This year, Rappler became an official fact checker for Facebook, which has called the Philippines “Patient Zero” in the battle over misinformation.

The Philippine government’s case against Ms. Ressa and Rappler was brought by the country’s Department of Justice and centers on a 2015 investment in Rappler by the Omidyar Network, an American organization owned by Pierre Omidyar, the founder of eBay. At the heart of that case is a financial transaction that is also the subject of a Philippine Securities and Exchange Commission effort this year to revoke Rappler’s license to operate.

Francis Lim, a lawyer for Ms. Ressa, said her arrest would “just give more weight to the well-founded perception that our government has been unduly rushing cases against the officers of Rappler because of its fearless reporting on the true situation in the Philippines.”

Speaking on Sunday night from the airport, Ms. Ressa said that her arrest would not silence her.

“I have been a journalist my entire life,” she said. “I will continue to hold the government accountable.”