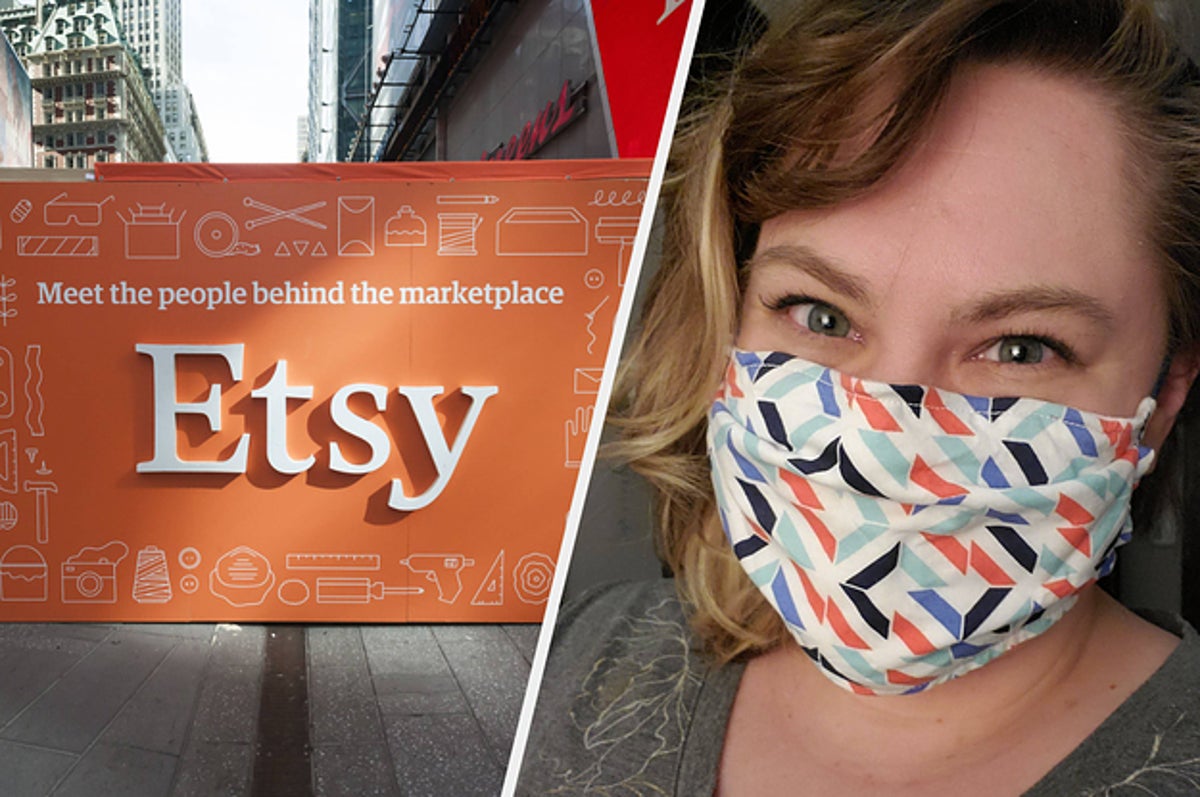 The holiday season is usually (in a nonpandemic year) a time to unwind, take some time off, and celebrate with loved ones. But for Alanna White, Christmas looms dauntingly, marking the last day her Etsy shipments can reach their destinations before angry customers might tank her shop with one-star reviews.

With the US Postal Service still experiencing massive delays, and Christmas just days away, there is only so much she can do to make sure her customers’ orders arrive on time. And if they don’t, her livelihood could suffer.

“Anytime I see the little Etsy notification symbol on my phone, I do get a little freaked out,” said White, 26, of Highland, Illinois, who runs an Etsy shop selling merchandise based on her favorite TV shows. “Because, is it going to be someone complaining? What’s it going to be now? So anytime I see a review and it’s not a bad one, I [let out a] sigh of relief.”

It’s been a pretty great year for Etsy. The online marketplace for handmade goods drew many first-time customers when fabric masks became a part of everyone’s daily wardrobes and people couldn’t find them almost anywhere else. In October, Etsy announced they’d more than doubled their revenue growth compared to the previous year. Throughout the holiday season, several TV commercials ran nationwide encouraging people to shop for gifts on the site, and the company partnered with Instagram influencers to post sponsored content.

But five Etsy sellers who spoke with BuzzFeed News said they and others are stressing right now, knowing their products might not be delivered by Christmas through no fault of their own, and are painfully aware that could mean low reviews and less business in the future. Some say they feel the company has left them in the dust with the goal of becoming a sort of Amazon of handcrafted goods.

“It’s just frustrating, because it does kind of feel like Etsy’s left us to the sharks,” said White. “And they’re just going to collect their money and run.”

In a statement to BuzzFeed News, an Etsy spokesperson defended the company’s response. “To address carrier delays in the US, we’re focused on supporting sellers by making available the latest information we have,” the spokesperson said, “and we’ve dynamically adjusted estimated delivery dates and on-site communications so that buyers have the insight they need when making decisions about their holiday purchases.”

Crystal Miller, 37, told BuzzFeed News she’d received three one-star reviews on Thursday alone. Her Etsy shop, where she sells masks and Christmas ornaments, once had a five-star overall rating, but that has since slipped to four and a half — a seemingly small drop, but major if you’re competing against thousands of other people selling similar stuff. After sending out her packages via USPS from Logansport, Indiana, she’ll watch the tracking numbers closely as some of them make their way to the buyers and others stay stuck where they started for days on end. “Packages will go to a processing center and sit there for five days, and we don’t have any control of it,” Miller said. “I’ll send 20 packages a day, and half of them will arrive on time and half of them don’t.”

This is likely a familiar issue for anyone who, in recent months, has endured unusually long delays for a package to be delivered, from Etsy or anywhere. December is always a busy time for the Postal Service, but the USPS has been brutally struggling for months ever since the Postmaster General Louis DeJoy, an appointee of President Donald Trump’s, overhauled the agency in the lead-up to the presidential election, instituting numerous changes that have drastically slowed down delivery times. Some of these cost-cutting measures were put on hold until after the election and are now being appealed for reinstatement.

Now, with COVID-19 rates at record highs across the US, nearly 19,000 of USPS’s 644,000 employees are on sick leave or are quarantining and unable to work, according to the Washington Post. Postal facilities are so backed up with packages that some are refusing to accept more, the newspaper reported, causing a traffic jam that’s likely to delay the arrival of many people’s Christmas gifts.

As Etsy customer complaints pour in over the slow-moving packages, Miller has few options at her disposal — after all, she can’t make them be delivered any faster. “If, for example, somebody doesn’t get their Christmas ornament, I can remake it and send it out,” Miller said. “But, [let’s say] I am out of that product’s material and the time to make it, and I’ve gotta ship it again. That’s cutting into my bottom line, and if that happens, I’m at net zero — I don’t make anything off of that.”

Etsy has said that low reviews based on shipping can be appealed, but sellers say they have had mixed success in getting these reviews removed. Etsy forums, as well as subreddits and a private Facebook group for sellers, have been abuzz in recent weeks with sellers saying the company has at times refused to remove these poor reviews, even when they explicitly mention shipping. In a post on the forums Tuesday, an Etsy community manager reiterated that sellers should report reviews that are based on “things outside of the seller’s control, such as the actions of a shipping carrier.” They also said the company had taken additional steps in December to improve their transparency to customers about shipping delays.

Many of the Etsy sellers feel the company’s nationwide TV commercials are not clear enough about what Etsy actually is — not a big box store or a massive corporation, but a marketplace of individual sellers just doing their best.

“Etsy has been doing an insane ad campaign this year with commercials running constantly, telling people to support small and shop on Etsy, which is fantastic,” White said, “but I don’t think they’re doing a very good job of differentiating what kind of platform they have. I think a lot of people assume Etsy is like Amazon for handmade stuff.”

“The commercials don’t differentiate Etsy as a platform from what you would expect other e-commerce platforms to be,” said Michael Whitney, a 36-year-old in Philadelphia who sells prints of his photography on Etsy. “The ads are about personalization and stuff … but there’s nothing about the makers as part of that branding exercise — it’s all about the product.”

“The worst part is,” he added, “Etsy can wash its hands as soon as the transaction is done, because that’s where they get their cut.”

Etsy wasn’t always a corporate behemoth. The company was started in 2005 by a woodworker, Robert Kalin, and his friends, who were looking to streamline the process of selling their handmade wares online. Kalin was replaced in 2011 by then-CTO Chad Dickerson, who brought the company to IPO in 2015. For a while, Etsy was a sort of socially minded utopia amid a sea of hyper-capitalist startups; new parents of all genders got six months of paid leave, there were office yoga classes, and their commitment to sustainability got them a B Corp certification.

But in 2017, the company went through its first-ever round of layoffs and brought in a new CEO: Josh Silverman, a veteran CEO from the company’s board. Silverman pivoted to focus more aggressively on boosting profits, with many of the changes negatively impacting sellers in favor of a “customer is always right” mentality. For the first time, sellers were encouraged to compete against each other in pricing, run sales, and offer cheaper shipping, cutting into their earnings.

Even for those like Whitney and White, who have been lucky enough to avoid one-star reviews so far, they worry they’ll get them if — and more likely, when — their packages don’t arrive by Christmas. On item listings, a small gray box under the “add to cart” button warns buyers of this possibility, but based on the complaints many sellers are speaking out about online, it’s not enough.

Making matters worse, buyers are automatically sent emails asking them to review their purchase, often before it even arrives. Confused customers will often think this means their package was either lost or never sent out, and sometimes they’ll take out their frustrations in the review Etsy asked them to write.

Rebecca Christian-Lipker, a 29-year-old in Cleveland who sells quilts and masks on the platform, said she’s been proactively messaging customers whose deliveries are delayed in the hopes of stopping these reviews before they start.

“We’re already a smaller shop, [so] … getting a negative review just means I probably won’t get another order for another six to eight months,” Christian-Lipker said. “Even zero reviews is better than a bad review.”

For those for whom Etsy is their sole source of income, low reviews can be devastating.

Alicia England, a 28-year-old candlemaker in Chattanooga, Tennessee, woke up on Dec. 3 to find her shop had been mysteriously suspended. She had several orders open at the time, but due to the suspension, couldn’t print the Etsy-generated shipping labels or message the buyers to tell them what was happening.

“Of course I panicked, because this is how I feed my family,” England told BuzzFeed News. “This is literally how I bought my daughter her Christmas presents, how I pay for me and my husband to go out, how I pay for groceries half the time.”

Even though her shop had seemingly been removed from the website, customers were still able to leave reviews, and two — confused by England’s sudden disappearance, but unable to message her — left one-star reviews. Realizing there were more of these reviews on their way if she couldn’t message back her customers soon, she refunded six orders, losing an estimated $80.

After trying to reach an Etsy representative over email to find out why she had been suspended, she finally managed to talk to someone over the phone. “They basically said that it was a mistake,” England said.

Her shop was restored 10 days after it had been taken down, a crucial time for Christmas shopping missed. The two customers who gave England one star did eventually receive their candles, on top of a refund. One has since edited her review to four stars. The other customer updated her review, thanking England and saying she loved her candle — but she didn’t update the star rating.

For now, Etsy sellers are just holding their breath, hoping their packages arrive in time — but knowing they likely won’t, and hoping their customers are understanding about it.

“It’s anxiety-inducing, for sure, because to me that’s 150 people who could start yelling at me at any moment because they just assume I have the magical powers to snap my fingers and make it all better when I can’t,” said White, the seller from Illinois. “I can’t rest easy until those packages are delivered.”

Christian-Lipker, the Cleveland seller, urged Etsy customers to remember they are dealing with individuals, not giant companies like Amazon.