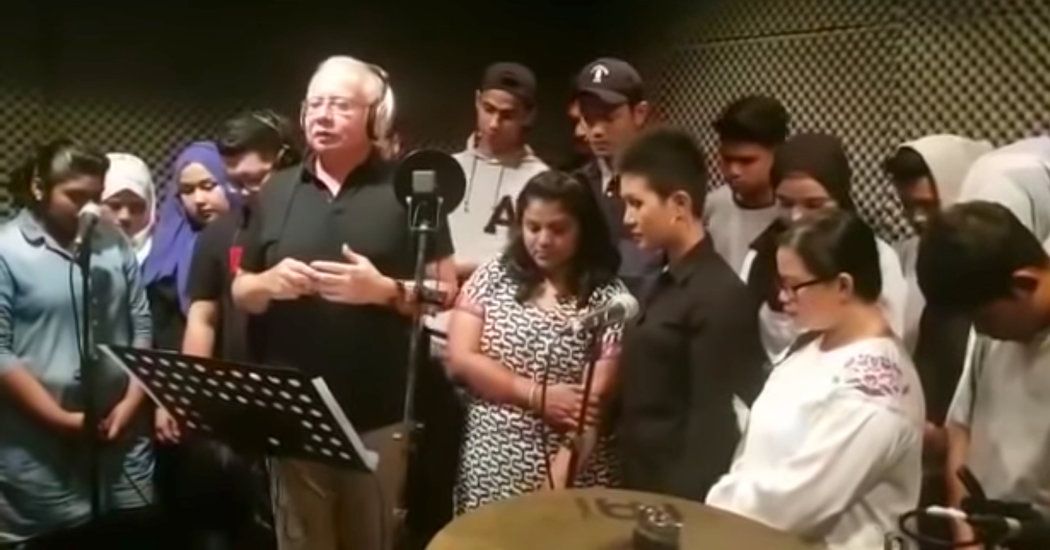 Najib Razak, the former Malaysian prime minister who was ousted at the polls last year and now faces dozens of corruption-related charges, pleaded his case this week. But not before a judge.

Standing before a microphone in a recording studio with more than a dozen young backup singers, he delivered a baritone intro to a reworked, Malay-language version of “Kiss and Say Goodbye,” the 1970s R&B hit by the American group the Manhattans.

“This is the saddest day in my life,” Mr. Najib laments in the spoken intro, in a video posted on a Facebook page for his political party.

He goes on to say that he was a victim of the opposition agenda of “slander and revenge.”

Mr. Najib begins to sway awkwardly as the chorus begins. An unidentified lead singer takes over with criticism of the governing coalition that took power last year:

Hope as high as the mountain

It shattered into dust

Why did this sad story happen in my life?

With all your promises

But I was deceived

And you played me out.

For nine years, Mr. Najib was seen as untouchable as Malaysia’s leader. But he had a spectacular collapse after a vast corruption scandal at a state investment fund fueled widespread public anger, leading to his party’s first loss since Malaysia became independent in 1963.

He now faces multiple trials for dozens of counts of criminal breach of trust, money laundering and abuse of power in connection with the fund, 1Malaysia Development Berhad, and a subsidiary.

The United States Justice Department says that more than $4.5 billion in stolen 1MDB funds was laundered through American banks, and that $731 million went into Mr. Najib’s personal account.

Mr. Najib’s wife, Rosmah Mansor, has also been charged with money laundering and tax evasion. She was known for having a taste for luxury goods and owning a large collection of designer handbags and jewelry.

Mr. Najib and Ms. Rosmah have pleaded not guilty, while Goldman Sachs has said it will contest the charges. Mr. Low’s representatives have said he does not believe he will receive a fair trial in Malaysia.

Mr. Najib said he had recorded the song at the request of his political supporters. “They were sentimental about the good things that we did in the past,” he told The Malaysian Insight, “and felt it was unfair that we lost the general election.”